We all know about the only certainty in life don't we?  Well, Monday was the sad day for Bess, our companion dog for almost 14 years,  We rescued her from an RSPCA kennel where she had ended up after a very brief career as a sheepdog (failed) and a briefer spell with well meaning owners who simply could not cope with her.

Her failure as a sheepdog left scars.  She worried for Yorkshire, was frightened of men generally and was terrified of men with sticks.  She also shied away from Land Rovers.  People in general frightened her - something of a problem when you live in a town centre.  We persisted with her, came to adore her and to admire her as she gradually came to terms with her fears, almost.

Her favourite place of all was in the north west window of the water tower where she could keep an eye on the station's comings and goings - and bark as appropriate; sometime whether-or-not. 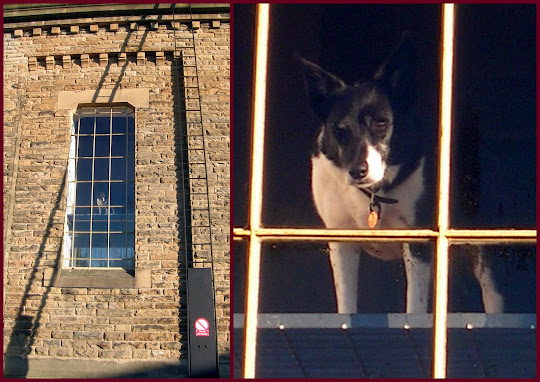 That Doggie in the Window

For some while she had been unsteady on her feet, especially on our hardwood floors.  All four legs would splay out and she was towards the end unable to get herself back up.  This situation led to limited exercise.  Eventually she lost her appetite for food - most unlike her!  It was clear that her mental faculties were failing too.  Deafness did not help when she would often just stand in the middle of a room wondering why on earth she was there.  We all know that feeling!

Our smashing vet Guy Bolger did what needed to be done and the house seems really rather quiet.

Posted by Settle Station Water Tower at 09:12 No comments:

BBC Breakfast Time Clip and Bracing Ourselves for a Tornado

Dunno if this will work but I came across this on Facebook this morning:

Showing the nation my short-lived career as the commentator on the Staycation Express on 21st July 2020.

That was the Staycation Express - its last run was on 12th September this year.  Early indications are that it was an outstanding success, despite COVID limitations.  Let us hope they can repeat the operation in 2021.

Meanwhile we have a treat today in the form of a private special train over the S&C, hauled by Tornado - seen here passing Pen y Ghent: 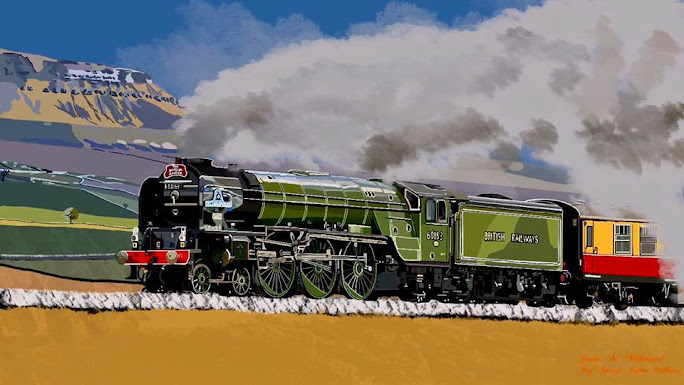 Posted by Settle Station Water Tower at 09:32 No comments:

Among the lengthy sub-set of problems brought about by the need to equip Terminals 2 and 3 has been the need to re-assess our already healthy stock of TV sets.

Which? Magazine has recently done a thorough review of TVs and their main conclusions are that TVs have advanced tremendously in recent times but that small (less than 38 inch screen) TVs, have not.  the prices of large TVs have fallen considerably.  Get  as big a TV as the room will reasonably stand.  Sit closer to it than you have been accustomed to - otherwise, what is the point of super high picture definition if you are too far away to see it?  Relatively large computer screens have emphasised that point.

That's all fine but the main room of the tank-house is so large (kinbig in family parlance).  Not a problem though - there are kinbig tellies to be had nowadays so now was the time to go for it.  We researched online and in Which?  LG is now the brand to go for.  They have comprehensively knocked Samsung off their perch with Panasonic and Sony quite a way behind.

AO.com were the suppliers.  The first kinbig (and kinheavy) TV duly arrived  and was placed, with difficulty, on top of the kinbig cupboard in the kinbig lounge where it unduly dominated the scene - see penultimate picture below.  On its inaugural switch-on it proved to have a broken screen, evidenced by a broken-screen pattern on it: 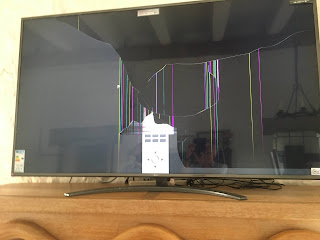 Bit hard to appreciate the size from that image but, anxious to stress to AO.com what an intrusion on our lives was a broken kinbig TV plus its packaging I took pictures of that too and it worked- see below.  In next to no time a replacement kinbig TV arrived yesterday - and it works! 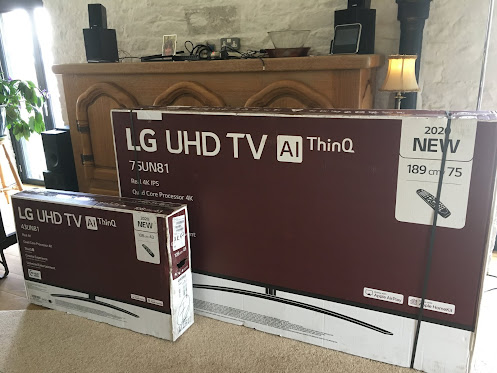 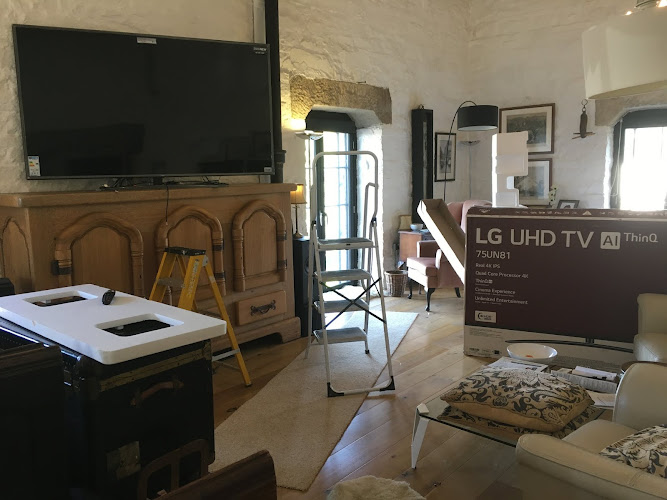 Be assured the replacement is being located on a stand on the floor!
Any suggestions on disposing of a kinbig cardboard box and accompanying expanded polystyrene? 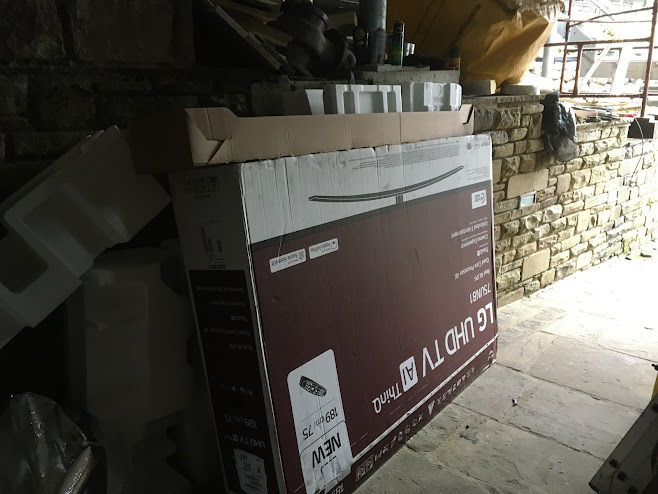 Posted by Settle Station Water Tower at 09:55 No comments:

Teasels, a Desk and a Shepherdess 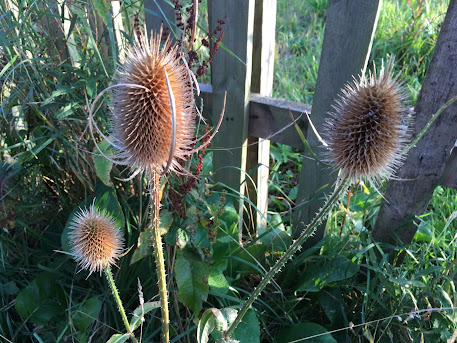 Yes teasels.  The land around Terminal 3 and behind Terminal 2 is a bit of a problem at present - neglected and overgrown for now whilst attention is diverted to the finishing touches of the buildings work.

Interesting though to see what decides it will grow naturally.  Buddleias of course on old railway land and teasels - a weed for some and a much valued plant for others: 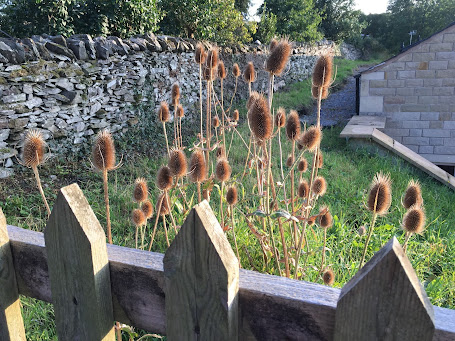 Inside Terminal 3 this magnificent Roll-top-desk has had a couple of coats of wax polish and has found a good home: 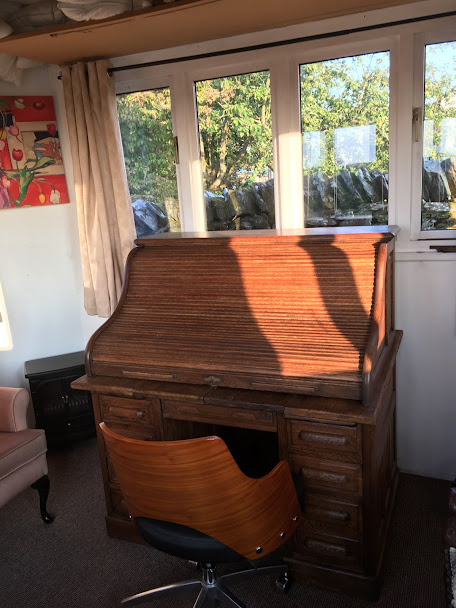 Finally, a sight for sore eyes - the cover of the September edition of The Dalesman features the Yorkshire Shepherdess Amanda Owen: 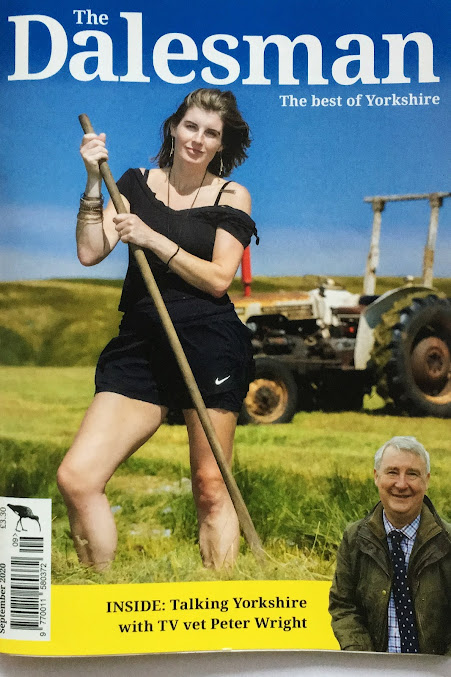 Posted by Settle Station Water Tower at 14:15 No comments:

Princess Elizabeth and a Red Squirrel

Photographed in the garden of neighbours Les and Val at the Settle Stationmaster's house: 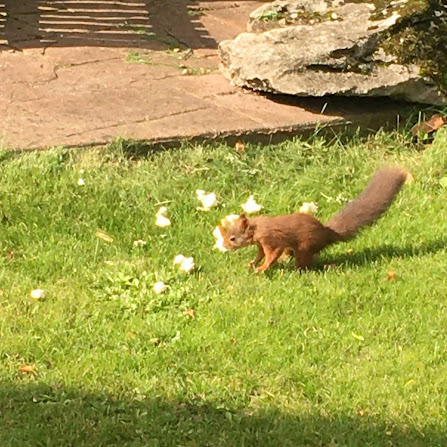 Haven't seen a red squirrel round Settle before.  The's quite a colony of them at Appleby though.

Perhaps this one caught the train?

Talking of which, we have had a real treat of a train passing by yesterday - a beautifully presented rake of Pullman carriages hauled by Stanier Pacific locomotive Princess Elizabeth: 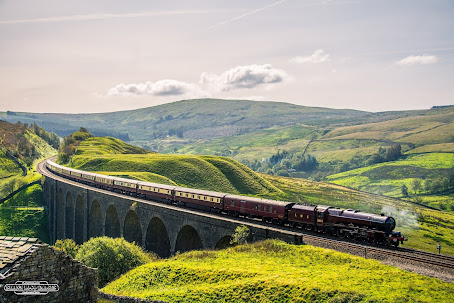 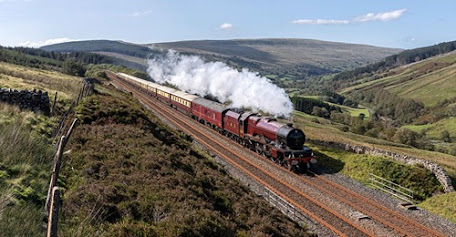 Posted by Settle Station Water Tower at 16:55 No comments:

The scaffolding railings across the banking below Terminal 3 are very effective as a safety measure to enable gardening but until they are covered with climbing plants they are a conversation piece or eyesore, depending on you view of them.  Yesterday I covered them with green mesh sheeting to soften them somewhat. 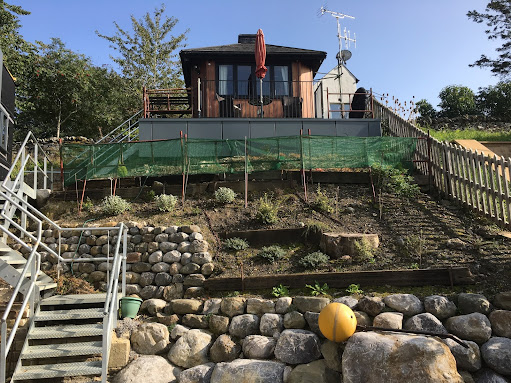 It has worked - somewhat.

Meanwhile, in other news, here are two of Pete Collins' amazing Ribblehead pictures from last year showing the last train of the day - the Ribblehead turn-around: 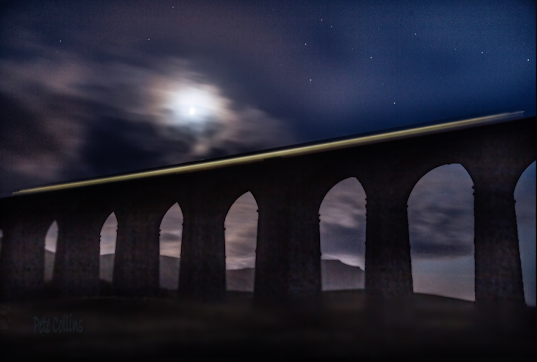 Here it is on a long exposure going over the viaduct and appearing as a straight line of light
And approaching Blea Moor signal box: 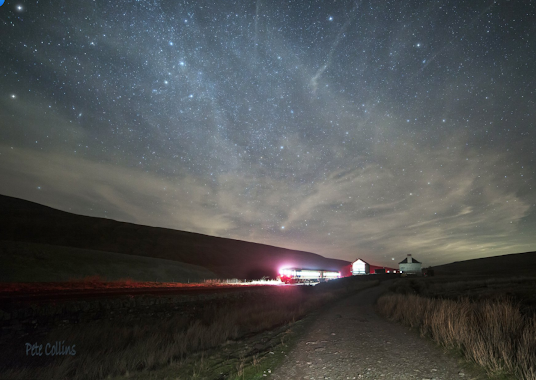 And finally - an astonishing photograph of a (then) Virgin Trains First Class Lounge at Leeds I think. 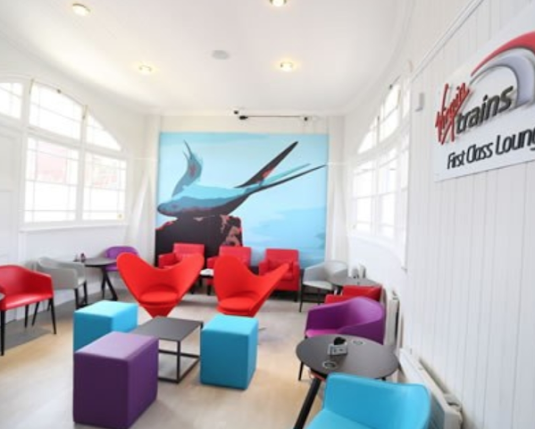 Just what shape did they think their first class passengers were up north?

Posted by Settle Station Water Tower at 08:52 No comments:

I am starting this posting with a picture from Facebook, just to occupy the space to the left of the gubbins on the right of the Blog 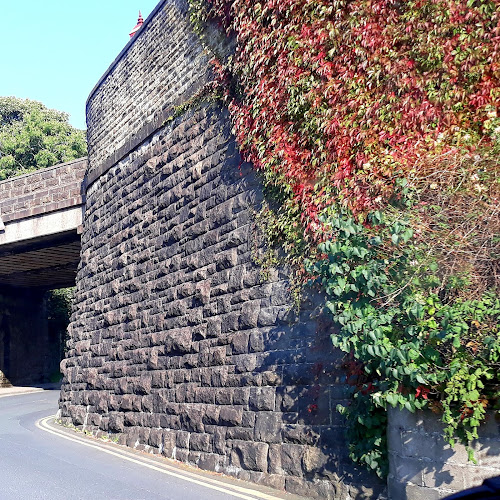 It shows the amazingly tall retaining wall on Station Road beneath Settle station's down platform which supports the twin track railway line too.  Our 'garden wall' onto the station drive is identical in style and build but less tall of course.  That wall had to retain the weight of the water tower and its water - a massive total weight.

Now for the starlit bit:

Pete Collins is a remarkable photographer who specialises in the night sky.  Last Wednesday was an ideal night for him and rather than contenting himself with his favourite subject - the Ribblehead Viaduct - he thought he would have a go at Settle Station, not without its problems with light pollution, unlike the viaduct.

He asked us to tell him when the station platform lights went out, which we did.  Around midnight he was able to get two stunning pictures.  The first confirms that the Settle-Carlisle railway does indeed go north.  Clearly visible is the familiar shape of The Plough and above it the Pole Star at midnight . . . 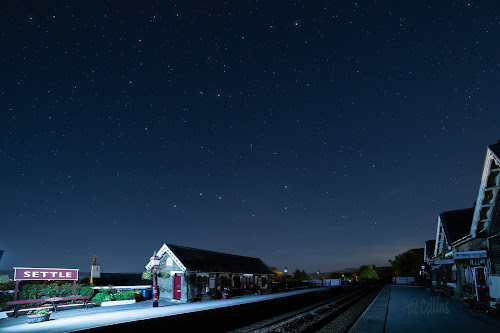 The next picture shows the water tower to the right - prominently well lit to good effect in this  image: 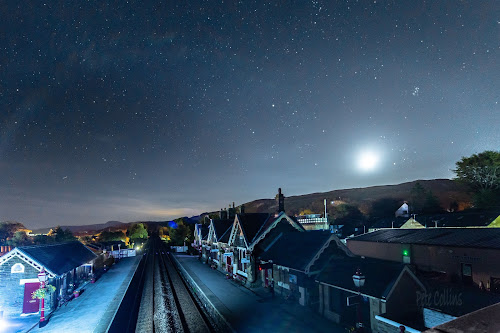 These were lucky exposures as the station platform lights came on at 0015!  Trains do run at night on the S&C but not with passengers nowadays.

Posted by Settle Station Water Tower at 09:44 No comments: