We've had a bit of a change-around in the main room by rotating the huge dining table through 90 degrees and taking it quite a bit further northwards: 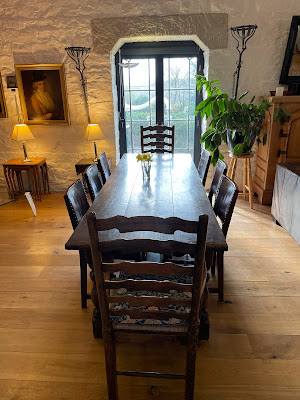 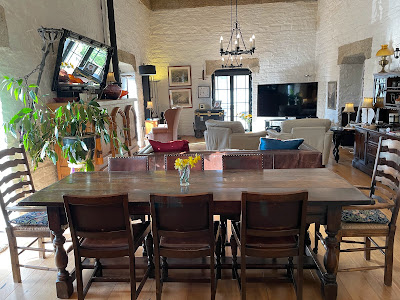 I have slotted those in to absorb space, hopefully to enable the full glory of this picture from the weekend.  I think it is a wonderful picture, not least because it catches the water tower with its Union Jack and Ukrainian flags flying in the spring sunshine. 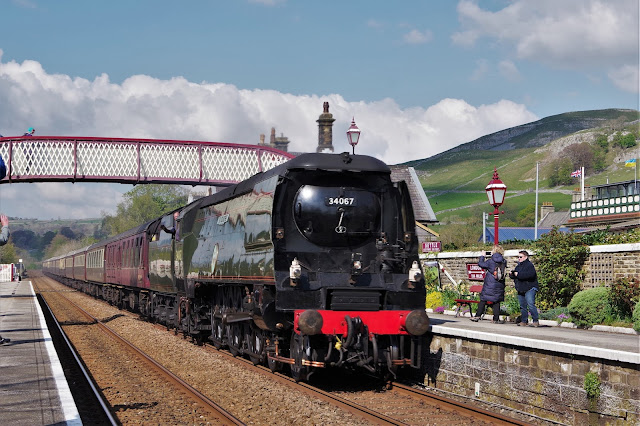 Our Kingspan Envireau rainwater harvesting 'system' has become quite famous, for all the wrong reasons.  It has been out of action (again) for some months after the main delivery pipe from the submerged pump to the house burst (for a second time) inside the tank and well out of reach far below the access manhole.

The only way to repair it was to get inside the underground tank via a deep and narrow shaft, barred part way down by pipework which had to be cut away.  Even then the plastic threaded fitting which connected the burst pipe to the outside world was far out of sight. 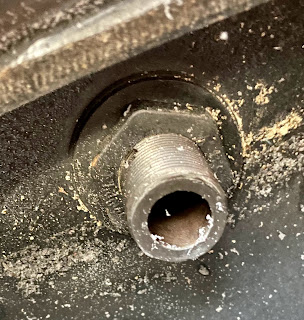 The only answer was to drain the tank, create a man-sized access through pipework and wires to get an eye level view of the repair site, below the overhanging rim of the tank itself.  Potholing is popular in the Yorkshire Dales but only for the brave of spirit who do not have claustrophobia.  I have done it when younger and dafter but did once resolve never to do it again when crawling through a wet and narrow passage running off Gaping Gill.

The depth of the dark, dank, delve can be judged from these two pictures.  The first shows the access ladder resting on the bottom of the tank.  There are just three rungs sticking out.above the ground: 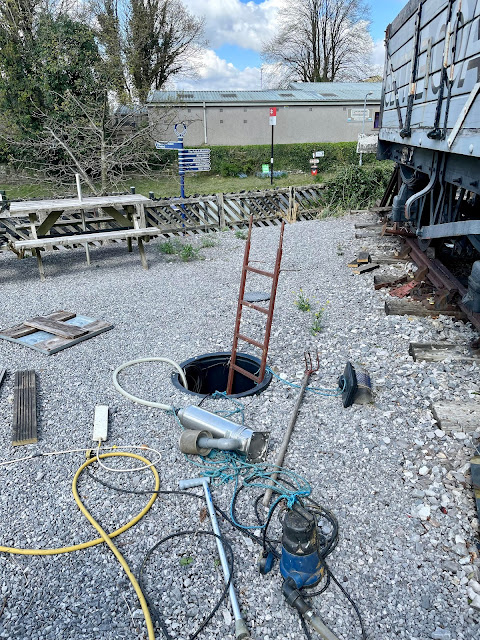 Job done, here is the entire ladder propped against the side of the coal truck - all fourteen rungs of it: 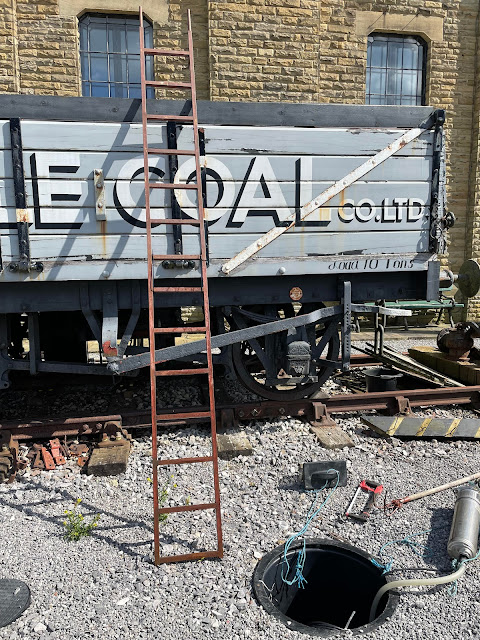 I had put the problem to Kingspan Envireau in an enquiry from their website in which I asked what sort of pipe I should use to ensure it did not again bust.  They did not reply.  I did manage to get advice from a US American website which was useful.  In passing, I included a link to the rainwater harvesting tales of woe in this Blog.  Surprise, surprise, I am not the only one out there who has had Kingspan troubles.  It even caused comment from the USA about the Kingspan cladding on Grenfell Tower.

My Kingspan system has become so famous that I was recently asked to review a now recently published book on rainwater harvesting. 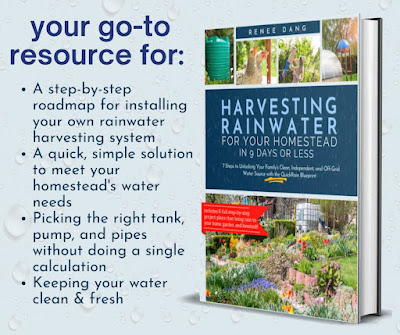 Having read the .pdf of the book I wrote to author Renee:

I really do wish that I had been able to see your book eleven years ago when we installed our grossly over-elaborate system. My advice to anybody about to 'take the plunge' is to keep it simple - and to read Renee's book.
Besides dealing with those parts of the world with low rainfall and no mains water, it deals in great detail with the technicalities of elaborate systems
like ours.  Ours was a well intended eco-indulgence, badly designed and installed by Kingspan Envireau.
Posted by Settle Station Water Tower at 09:42 No comments: 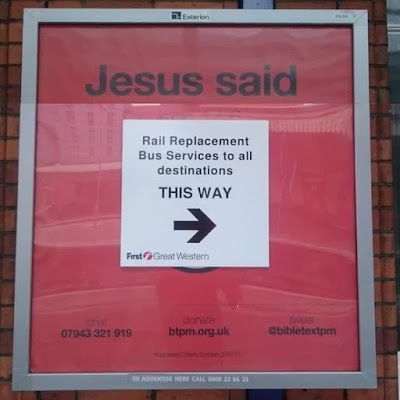 Not wanting to offend anybody but this has cropped up on Facebook and as rail replacement buses are a frequent part of our lives I just could not resist this temptation.

When we sold our end of The Folly in Settle to the museum next door we did our best to include in the sale all of the items that were unique or special to The Folly.   Among other things we left two wrought iron wall fittings, the likes of which we had never seen before or since.

Their purpose was, and still is, unclear.  They are a pair of Y shaped irons, the bases of which are iron pegs which sit in iron rings set into a wall.  The can turn in those rings to some extent.  Nearer their tops they have iron rings set into them in quite an ornate but loose way.  Those rings attach to substantial iron chains which in turn are attached to more fixed rings on the wall above.  The lengths of these chains are variable, so making the angle to the wall of the entire fitment adjustable.

On top, between the two arms of the Y is a semi-round iron basket.  The baskets are hinged on two opposite sides.  A heavy piece of decorative ironwork below each basket ensures that they hang perfectly level, whatever angle is chosen for the 'upright' part of the Y shape.  Got that?  I doubt it but the pictures below should help: 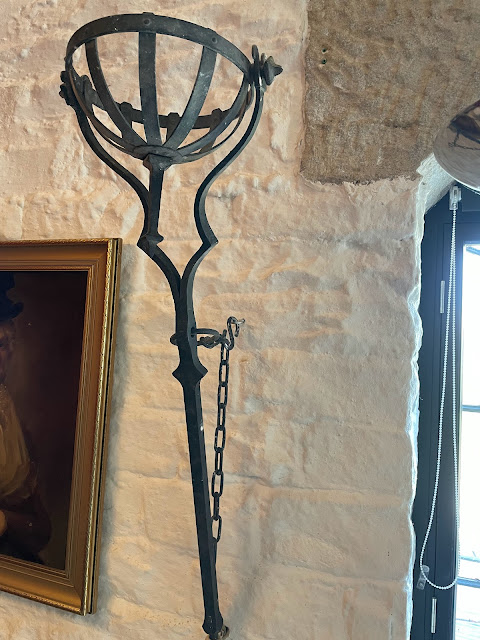 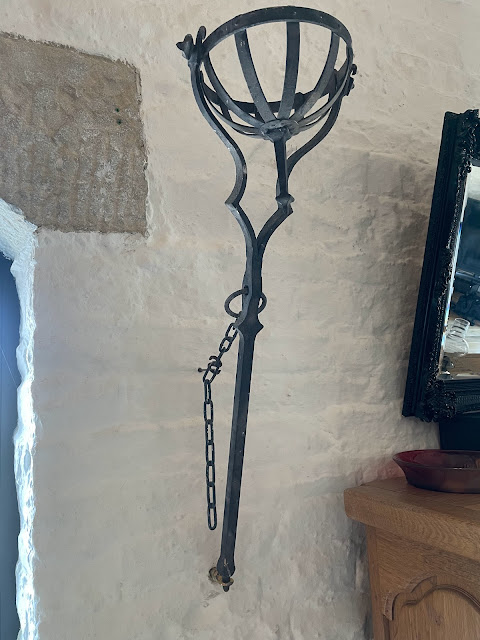 At The Folly we had mounted them on a rustic wooden screen between the main lounge on the ground floor which separated off the small kitchen.   That room had become the splendid cafeteria on the now just one-grand-house, The Folly.  The ground floor of 'our' north range has been adapted to its new use and happily the rustic wooden screen is still there - but the wrought iron things were removed as they were in the way slightly but, more importantly they could come adrift and fall on somebody.
For years they have been stored in the space below the Folly tower, literally gathering dust.  The Folly Trust had tried to identify their purpose and even offered them for sale locally online.  There were no ideas and no offers.  Perhaps unsurprising - they are heavy, large and hardly the sorts of thing that would fit in with anything in a modern home.  Besides which they are literally use-less.
Even so, they are curious, unique (should that be bi-nique as they are a pair?) and somebody went to a good deal of expense and trouble to make them.  In the absence of any takers, I had said that they might fit in the quirky surroundings of the water tower and so it has come to pass.  We have put them either side of one of the west facing windows in the tower's main room, as in the photographs.
Nowadays you can post a photograph online and seek comparisons.  That throws up similar items called 'prams' or 'landiers' but both, though similar, are fireplace irons, set at ground level for drying logs.  None of them online is pivoted for vertical mounting like these.
So, over to you - what ARE these self-levelling iron baskets for?

Our brief? return to winter produced this wonderful image of Pen y Ghent, taken from the doorway of Terminal 3 - the Wendy House - yesterday.   Also visible from our bed in the new main bedroom of Terminal 2.  Looks rather like an iced bun don't you think? 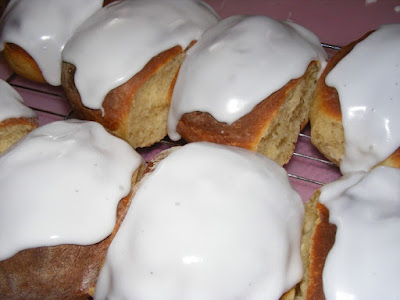 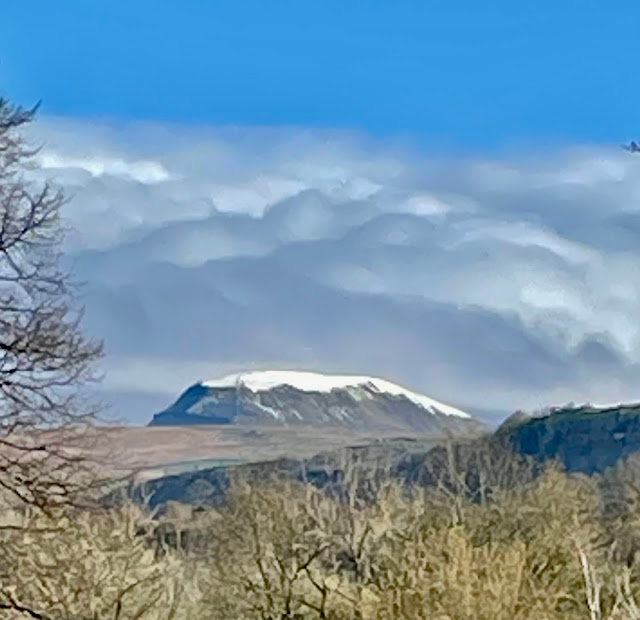 Posted by Settle Station Water Tower at 09:00 No comments:

I think it has been the warmest March on record but all good things etc..

Winter is back for a few days at least.  There was a goodly covering of snow as we
awoke yesterday: 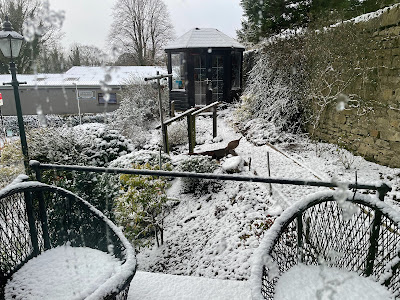 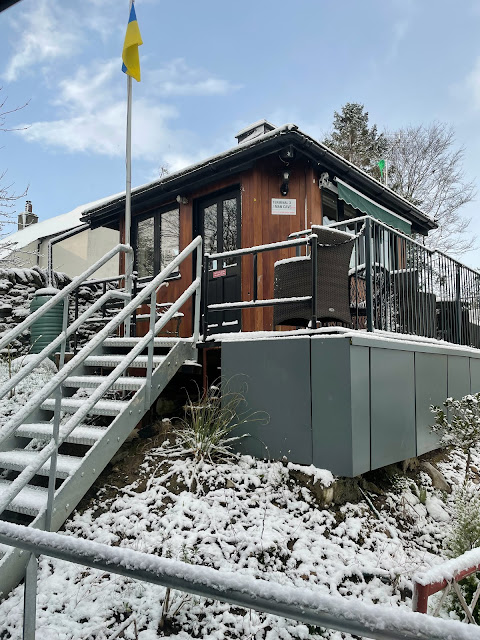 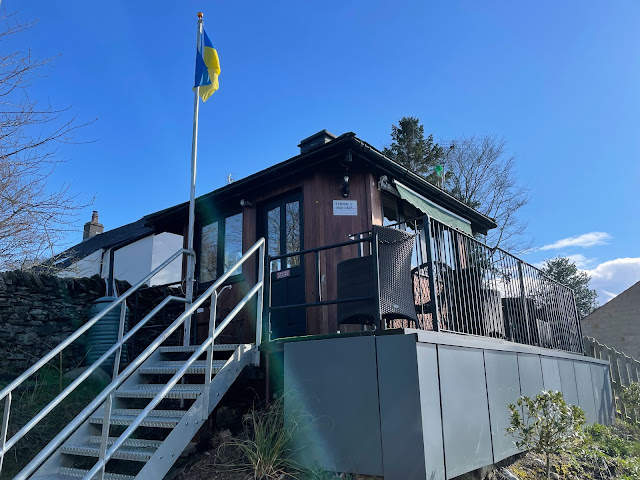 But by the end of the day it had all gone.
Meanwhile our ring-necked pheasant has just about taken up residence.  He parades up and down right outside our bedroom window and poses on one leg: 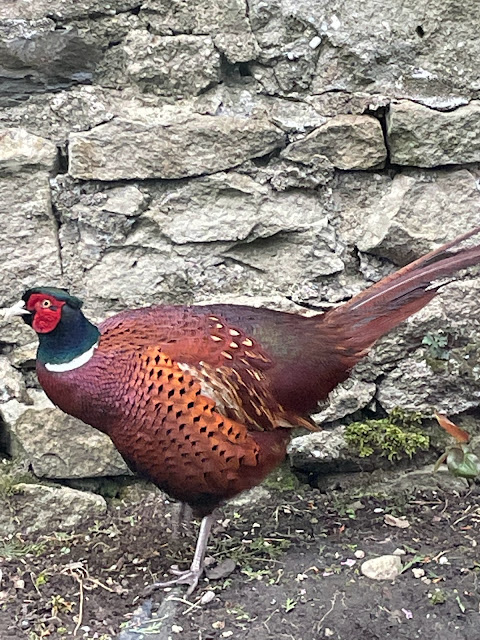 Posted by Settle Station Water Tower at 09:03 No comments: