For the past year and more I have Blogged (horrible word) about the enormous landslip at Eden Brows, near Carlisle, which severed the Settle-Carlisle line to through traffic.

On March 31st the line re-opens after 15 months of closure.   By then the tracks will be reinstated and back in use, amid great celebration including an inaugural steam train hauled by Flying Scotsman.

But what will passengers SEE at Eden Brows?   Almost nothing out of the ordinary is the answer which is something of an anticlimax.    That seems an awful shame after all that effort in dealing with the biggest landslip ever tackled by Network Rail.

The repair has involved constructing what amounts to a brand new viaduct to add to the 22 which already exist along the line but it is entirely underground, beneath the tracks so totally invisible.   If anything is to be made of this in public relations terms it would be good to find an existing viaduct of comparable size to that underneath Eden Brows.    Yesterday I discussed this with Network Rail's Eden Brows scheme manager Phil Middleton who was able to give me the measurements.

In 'old money' Eden Brows viaduct is 79 feet deep and 82 yards long.   Four of the existing s&C viaducts are of similar size.   These are

Ais Gill Viaduct - 75ft tall x 87 yards long - almost identical but it crosses a steep ravine so the height is mainly in the middle.   Even so, it is impressive: 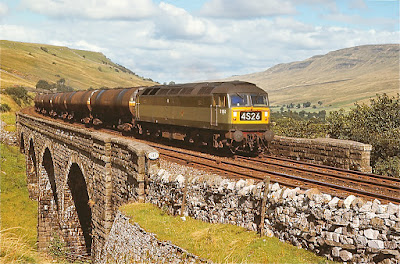 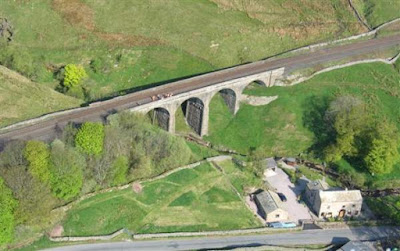 That centre pillar is not quite as tall as Eden brows is deep.

High Stand Gill Viaduct is 60ft high by 91 yards long but trees obscure much of it.

Crowdundle Viaduct is just 55ft tall by 86 yards long so the height does not do justice to Eden Brows: 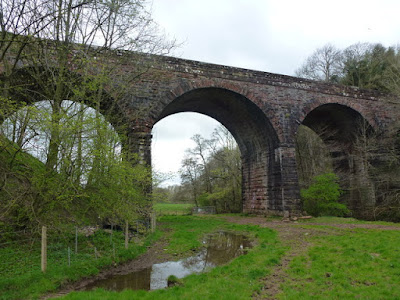 Finally, there is Dry Beck Viaduct which at 80 feet tall by 139 yards long could suit the purpose nicely: 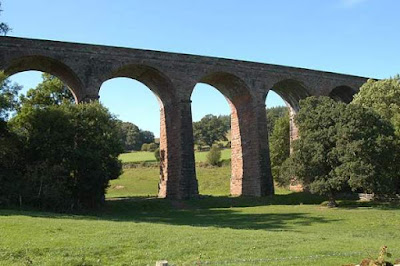 The height above ground is just about spot on.   Although it is longer than Eden Brows, the far ends are obscured by trees, leaving the visible arches to represent the scale of the Eden Brows below-ground works almost exactly.   What is more, it is very near to Eden Brows so providing an almost on-the-spot comparison.

In summary, the first and last of the above pictures represent the enormity of the Eden Brows underground viaduct.

In passing, here is a cross section of the part of Eden Brows Viaduct that is presently under construction - the decking slab in yellow and the railway itself:

Note how the tracks are on an angle.   The viaduct is on a curve and the trains when at full speed need to lean into the curve.


Posted by Settle Station Water Tower at 09:15 No comments:

SETTLE from the Train 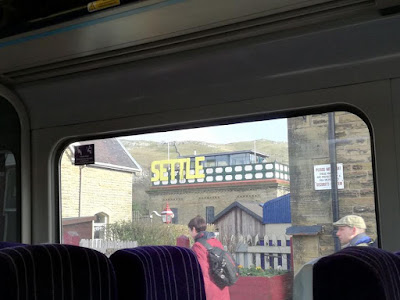 No doubting where you are eh?
Posted by Settle Station Water Tower at 13:40 No comments:

Sorry for the absence of postings these last few days.   Rather busy with the three days of scheduled steam hauled trains over the S&C - the first for nearly 50 years.

Each day the main trains were full up and would-be passengers were left at Skipton - 300 or so of them.   5,500 made it and travelled on the trains and the whole thing was a huge success, attracting worldwide media coverage.   Here in the UK there were live feeds into the BBC TV news bulletins throughout day one.   I travelled on all twelve trains in my On-Train-Guide capacity and am now a sworn-in trained door-steward too, but I shall not let it go to my head.

Anyway, here are a couple of pictures captured on the S&C web cameras: 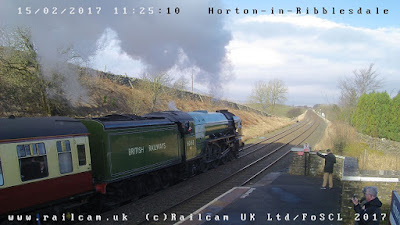 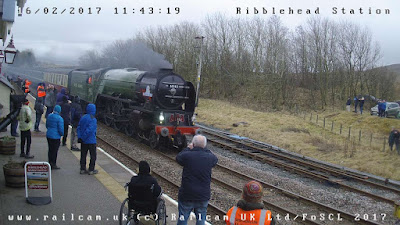 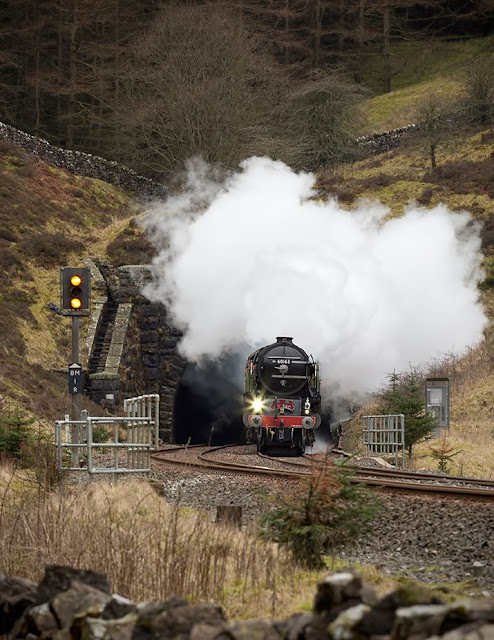 And here's a super black-and-white picture of the morning northbound train crossing the Ribblehead Viaduct on 14th February.   It is well worth clicking to enlarge to reveal the unprecedented number of cars parked on the Hawes - Ingleton road behind the viaduct and one of several drones that were in the air at that stage of the journey.  Can you see it?

Posted by Settle Station Water Tower at 09:10 No comments:

The Roof Room at its Best

Today we have got the log burning stove cracking in the roof room and the weather has obliged with a blizzard.   Grandchildren, log burner, blizzard and the Six Nations on the HDTV up in the sky with a 360 view.   What more could a chap want?

Posted by Settle Station Water Tower at 14:54 No comments:

Lancashire - a Place where Everyone Mutters?

This is how the signs are supposed to look: 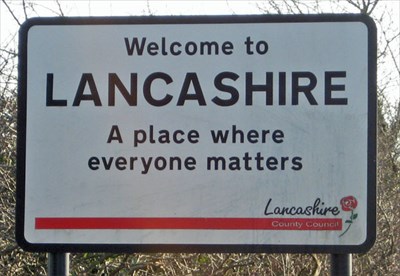 Nice thought of course but a waste of money maybe.

It was not long before a hero with a black felt-tip changed an 'a' to a 'u' so it became a place where everyone mutters.

That was the thrust of my 2012 Blog post and, sadly I cannot find a picture online.   The Red Rose County Council was quick to remove and replace such defaced signs, more's the pity on several grounds.

Undefeated, the heroes have struck back with a far more easily achieved, slightly more subtle and equally appropriate modification: 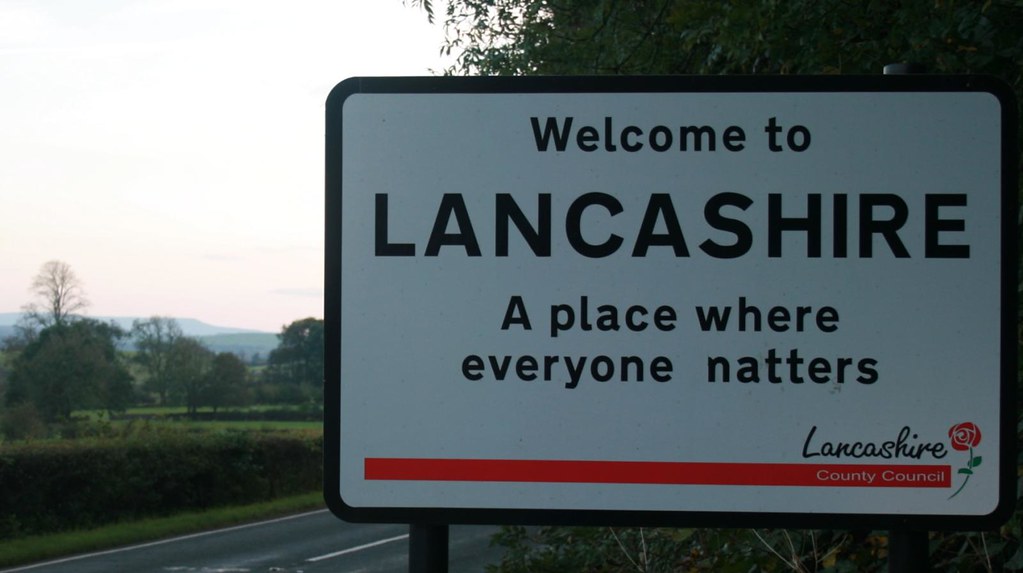 Makes you feel proud to have a sense of fun and to live in Yorkshire.


Posted by Settle Station Water Tower at 10:04 No comments:

Stand by for Tornado

This magnificent machine will be hauling regular passenger trains through Settle next Tuesday, Wednesday and Thursday.   Here it is at Shrewsbury during the weekend. 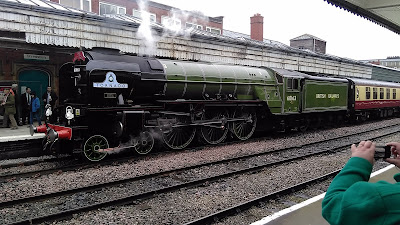 The first time in 50 years that steam has hauled scheduled services in the UK.   And it stops at SETTLE!

Here is its timetable:

(You may need to enlarge the .pdf when you get it on your screen.)

Almost certainly there will still be places to be had at Settle for the first and last trains of the day.

Normal day to day fares.    How about a day in Leeds, Bradford, Saltaire etc, departing and arriving in style?   Could be another 50 years before this happens again - if ever.
Posted by Settle Station Water Tower at 08:30 No comments:

Found this on E-bay and bought it.   It shows the original water tower at Appleby station.   It was demolished when steam 'finished' in 1968 but that was regretted soon afterwards as steam gradually returned.   Appleby Round Table built a replacement in 1991, which serves to this day. 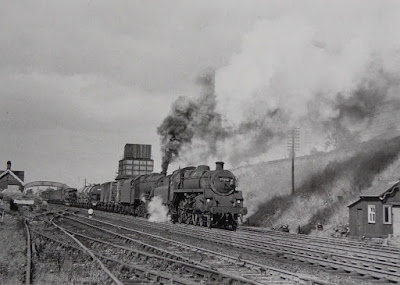 What was the curious wooden structure on the top of the tank all about?

Not sure how this image has eluded my pathetic obsession with  Settle-Carlisle water towers.
It is from a postcard produced in support of the Save It campaign of the 1980s.   The reverse is just as interesting for its wording.   It will appear below when I receive the postcard.

And here it is: 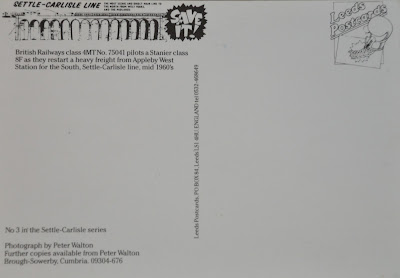 Posted by Settle Station Water Tower at 09:00 No comments:

Many moons ago I posted some details about Settle's other railway water tower at Giggleswick, courtesy of Michael Soames who has now sent me this one, dated ?1962: 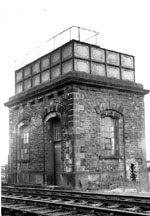 Less than half the capacity of Settle's tower, it is probably older.   It has seen better days and there is a curious and large hole to the right of its base.   Other pictures show a substantial chimney at that corner of the tower: 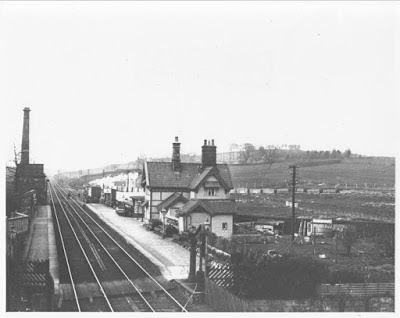 The picture below, taken from the fields to the west of the line appears to show the stump of the chimney during demolition, which probably explains the hole. 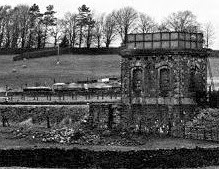 Judging by the lack of foliage on the trees and their size, these three pictures seem to be a set.

Country life can be a bit boring sometimes so the demise of a local landmark seems to have made the  photographs worthwhile!


Posted by Settle Station Water Tower at 08:50 No comments:

The big yellow SETTLE letters have come back into focus as the re-opening of the railway line approaches.   They had been in storage alongside the coal truck since late last summer when they were taken down for fear of upsetting the planners.

I have been in e-mail correspondence with the owners of the letters, Settle Town Council - hoping to find somewhere else in the town for them, preferably within view of the railway.   Nothing came of that idea but they did ask if I was prepared to continue storing them out of harm's way.

Sooooo they are now in safe storage and out of the way, at the town end of the tower this time.   Unlikely to be stolen from up there anyway! 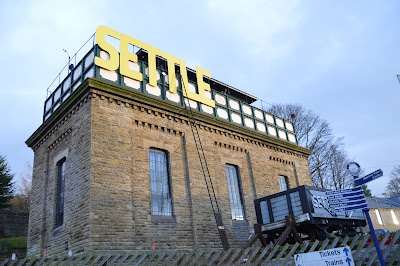 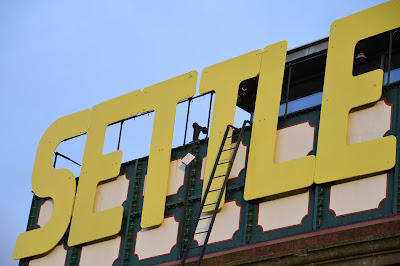 Posted by Settle Station Water Tower at 16:41 No comments:

My new zoom lens having had its first outing (see preceding Blog posting) I have been playing with it.   Here are a couple of things that are visible from the top of the tower: 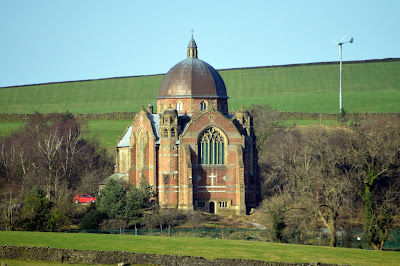 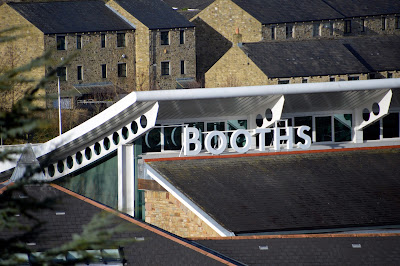 Both pictures were taken at full zoom and hand held, rather than with a tripod so the pictures are not as sharp as they could be.   The first is Giggleswick School Chapel and the second is Booths supermarket.

If it means anything to anybody the camera is a Nikon D3200.   Its normal lens is 18-55mm (whatever that means) but the new zoom lens is 18-300mm.   Presumably that means it is nearly six times more powerful.

Some fine day I shall have a proper play with it.

Posted by Settle Station Water Tower at 15:07 No comments:

The Flying Squad Descend on Settle

Right alongside our Sidings gateway is a mobile phone mast.   We could probably heat our water with the microwaves it sends out if only we knew how.   The boxes of electronic tricks below the mast have been breeding these last few months and we knew there would come a day when the mast itself would be refreshed.   And today was the day. 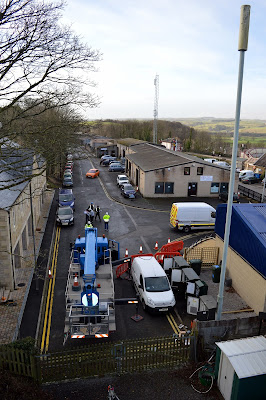 I thought this would be a good opportunity to put my telephoto lens to good use and was soon rewarded by a scene straight out of Only Fools and Horses - the one where they took down the wrong chandelier.   https://www.youtube.com/watch?v=LFuYIi5-igc   The Flying Squad consisted of Brian and Kev 1 (blue and orange helmets) and the sky lift driver, also Kev 2 (white helmet).   He, coincidentally had been the sky pilot when they were doing the Restoration Man filming.

The first job they had to do was to remove the plastic cylinder / cover at the top of the mast.   The plan was for orange helmet Kev 1 to undo the bolts at the very top  whilst blue helmet Brian kept hold of the cylinder.   That was the plan only blue helmet Brian forget his vital role and the cylinder crashed to the ground.   White helmet Kev 2 had the experience of such events to shout "Below!!" to the workers on the ground who rapidly complied. 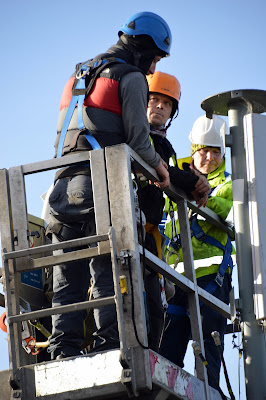 All was forgiven eventually and the trio had time to give me the thumbs up: 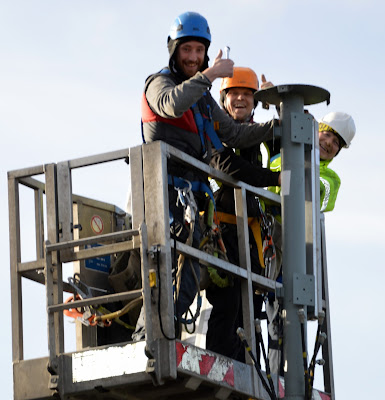 Here is what's inside the mast-top cover when the aerials have been removed:

Posted by Settle Station Water Tower at 11:34 No comments: