Click onto the link below to see self explanatory (ish) pictures.

If clicking on the link does not take you straight there, select the link, copy it and paste it into your search engine. Hey, nobody said this was going to be easy!

https://picasaweb.google.com/follyatsettle/WaterTowerProgress24November2011?authkey=Gv1sRgCKOl9Jbb5MGi_AE
Posted by Settle Station Water Tower at 18:50 No comments:

Google seems to be having worldwide problems with it Blogger system, hence the paucity of recent postings with unviewable pictures.

In an effort to get round this I have put pictures onto a web album which should be viewable by clicking the monstrous link below. Do give it a try.

On Monday Pat and I went to the Worth Valley Railway at Keighley to be filmed talking about how railway water towers worked. See some pictures at:

https://www.google.com/accounts/TokenAuth?auth=APh-3Fz6MYCG5d_N5M1y8POrqHiekYSEb3sZ-ZXgDOrxH6F9mkFmEM2TEv0uOPkEXT24bNn_yb65j5kj1e56b3XoGsI01RKWh7N595sEvjtK4EWpkmMkxu1qhxH3mK6ipy5JA3RT8wLDtEB-JMI_59nslVJSCpTOplFYTKqGy3AgYLnhlShbZa7pYUOUD9mKHvES_q1gYqaaEI1Ak2lkKGEId3y3Gf2Hedn-DIQawWEXmfo0-dIOpXPthW-5XEmNuQrEL8lGs-Mz2LeDFiU2QhJd-L5xmLAFUfuSqOTOvdYwJoqpSUh0xZKBUw-CxpdTkwj9XHyQ1y44kqImHJF9RKKfQBUXx_8IT5ig-ka9Bq06LkwELH3BQzNjMJO-lE7YvcbUrEWS6kNTPGwgG_rWQwsYH-6nNMK7tE-DHhn7gyflZLTmojqe6VSam0uJf4pg3ZvHooljRVUE&service=lh2&source=picasa2&continue=https://picasaweb.google.com/lh/sredir%3Funame%3Dfollyatsettle%26target%3DALBUM%26id%3D5678623146006842545
Posted by Settle Station Water Tower at 18:09 No comments:

Cranes and stones and planes

Today was a day of big lifting. Here is Brian Thornton with Settle Coal's big Hiab crane lifting four of the tank base plates. These will become the bridge out onto the embankment.

And here is the water tower crane in position. Pat was whelmed with it on seeing it. To quote her verbatim when asked what she thought of it, she said "It's big".

Bedroom fitter Arun has done a fine job, which matched the craftsmanship of Strachan's furniture makers.

Electic Ollie is not short of wires at the data hub of the building. The wiring is complete and is to be tested tomorrow

Stan Jordan's stonemasons have been hard at it. Rugby playing man-mountain Nick Cook (right) makes final adjustments to a stone that will form part of the main entrance.
Posted by Settle Station Water Tower at 18:51 2 comments:

I am sorry that there have been few postings of late - and those that have reached cyberspace have been without the intended pictures.

Each time I try to do a posting I get the following message:


Input error: Memcache value is null for FormRestoration
Well, that may mean something to somebody but it means sweet f.a. to me.   Does anybody out there know what I can do, or have access to a child maybe?

This is such a shame because so much is happening:

The ground floor flagstones are laid.
We have dug a great big hole for the water crane.
The kitchen has been tiled.
The scaffolding is down, revealing the annex.
Lots of bits and pieces have been finished off.
Posted by Settle Station Water Tower at 17:50 No comments:

The water cranes have landed in Settle

This is conservation in action. Way back when the line was under threat of closure and steam had ended British Rail preserved these two water cranes. Theya have lain in Network Rail's yard at Appleby ever since - see earlier posting on this Blog. Today, they were delivered to Settle for restoration, reconstruction and display - one at the water tower and one by the signal box.

Network Rail's Tony Taylor remotely operates the crane as the upper arm of one of the cranes is lowered to the ground.

and here is one of the uprights in mid air. Both cranes have been offloaded by the water tower because the lorry could not get access at the signal box. We can now set about constructing the concrete bases for both cranes,

A delightful detail at the top of each column is MR Co - Midland Railway Company.
Posted by Settle Station Water Tower at 17:13 No comments:

Yesterday we had a fascinating visit to Stachan's in Leeds to see our bedroom and office furniture being made. Stachan's are a long established family firm who make high quality fitted furniture. Being in Leeds they tick our box about trying to use local suppliers wherever we can. We toured the factory and saw all the processes from trees to furniture. Ours was at the finishing stage and we met Dean Thorpe who was polishing the wood - a process that lasts several days. Dean is one of a team of polishers but the same man does all the polishing on any one set of furniture. It was strange to see our furniture in bits under construction but with our name on it - and our plans lying on the work benches.

'Our' project manager Paul Alder hosted us and we met David Strachan, nowadays the senior Strachan actively involved in this dynastic firm. Located right by Bramley railway station we were able to get there and back by train.

Our furniture will be fitted from 16th November onwards.
Posted by Settle Station Water Tower at 13:38 4 comments:

We are decorating inside the tower so I shall not inflict a picture of that on you!

The ground outside the tower has been cleared, levelled and is about to get its top dressing of stone.   The pavement around the outside is complete, as is the Sidings entrance.   Almost all the interior doors have been hung and super they look too.

I shall wait a bit before posting photographs but all bar a few minor things the building work is now finished.

I bumped into a fencing contractor in Settle today who told me that he had regretted not having the opportunity to do the fences at the water tower.   However, having seen the job Les Brewer has made of the fences he was glad.   "I could never have done such a good job as that", he said.
Posted by Settle Station Water Tower at 20:16 No comments: 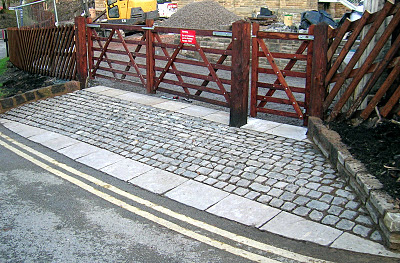 This is the drive into the Water Tower from the station approach road - and splendid it looks too.   The granite setts have been supplied to us by Network Rail and came from Paddington in London.   They were left over from work at Garsdale station and have found a home here at Settle.   They have been painstakingly laid by our builders Kilburn and Johnson.     Passers by have stopped in their tracks to admire this work being done.

Network Rail have been hugely supportive of this project, recognising that it will contribute visually to the ambience of Settle station and the heritage value.   Allowing us to re-open the access between the water tower and the station approach is just one example of ongoing cooperation. 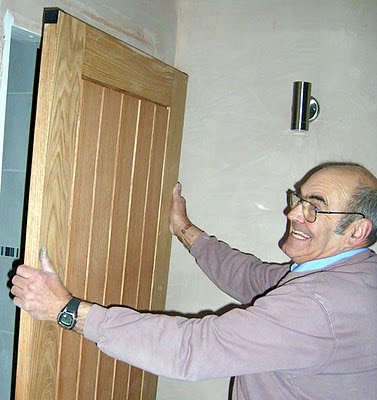 Meanwhile, inside the tower joiner Dave Richardson fits a door.   Dave is renowned as one of the best joiners in the Yorkshire Dales.
Posted by Settle Station Water Tower at 17:31 No comments: