Enjoying the delights of grandchildren this festive season.   The place will not seem the same without them when they go. 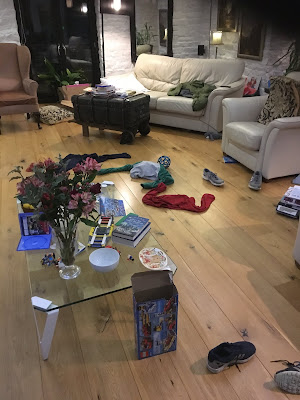 Posted by Settle Station Water Tower at 14:24 No comments:

The small town of Settle does Christmas exceedingly well but there comes a time well after midnight  on Christmas Eve when Santa is going about his business and everything stops, relaxes and ebbs away to total peace early on Christmas Day.    We have had the near unending joy of having the family here with us at Christmas - after quite an eventful year.   Early on Christmas Day whilst taking the dog for what is euphemistically called a walk we (me, Lorna, James and Bess) had the normally bustling Settle to ourselves.   Not a soul to see anywhere - really rather eerie if you let it be.   No more words.   Just a few (out of chronological order) Christmas pictures.

The only one requiring explanation is number three which is a bowl of the most delicious sprouts that ever broke wind - sprouts, leeks and bacon lardons.   I did tell Lorna that we managed to bring her up without using words like lardons.   It wasn't all that well received. 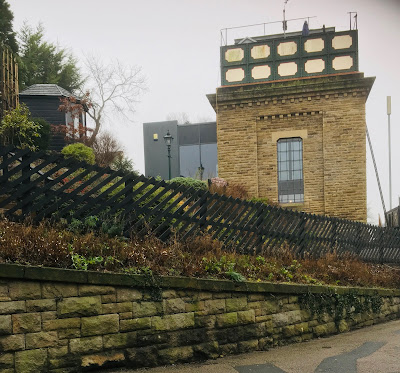 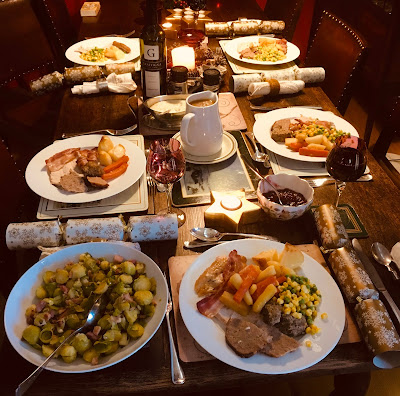 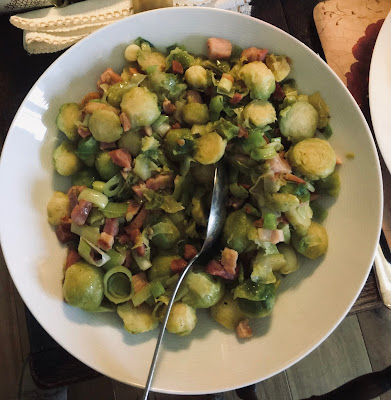 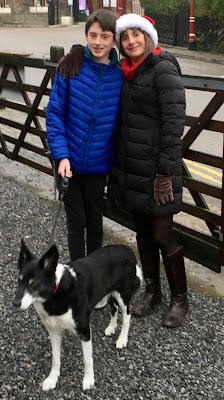 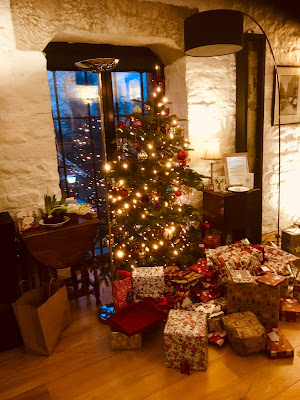 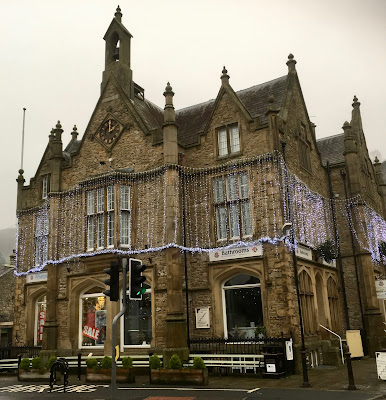 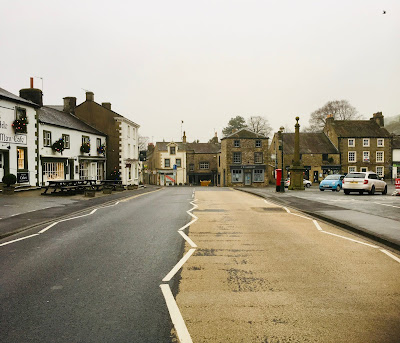 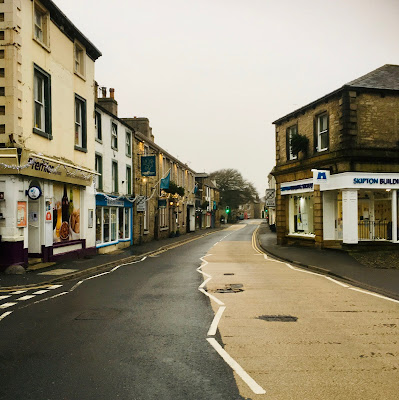 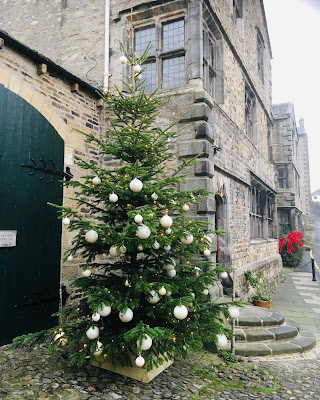 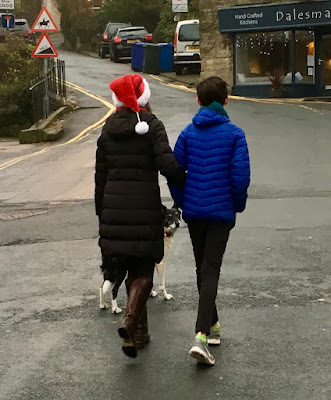 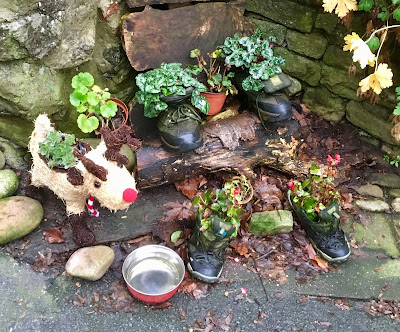 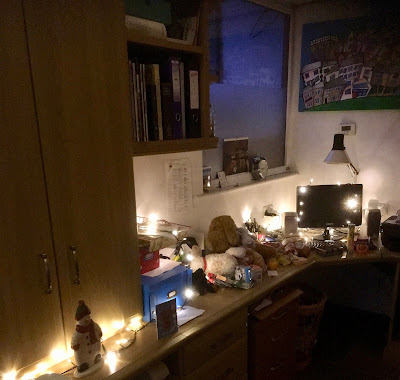 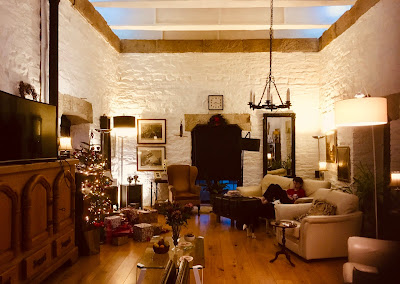 Posted by Settle Station Water Tower at 11:22 No comments:

There was just one passenger train through Settle yesterday but what a train it was!

The weather was pretty awful - but atmospheric.   Sound on.
Posted by Settle Station Water Tower at 17:03 No comments:

Some time ago I downloaded Google Earth Pro - it's free incidentally and I suspect it is just an updated version of Google Earth.   Grandson James tipped me off that the Google view of the tower was recent and you could actually see the name SETTLE painted on the roof.   He wasn't wrong either.   These screen grabs show the tower very clearly and were taken on 30th June 2018, obviously a sunny day.    Looks like early afternoon judging by the shadows: 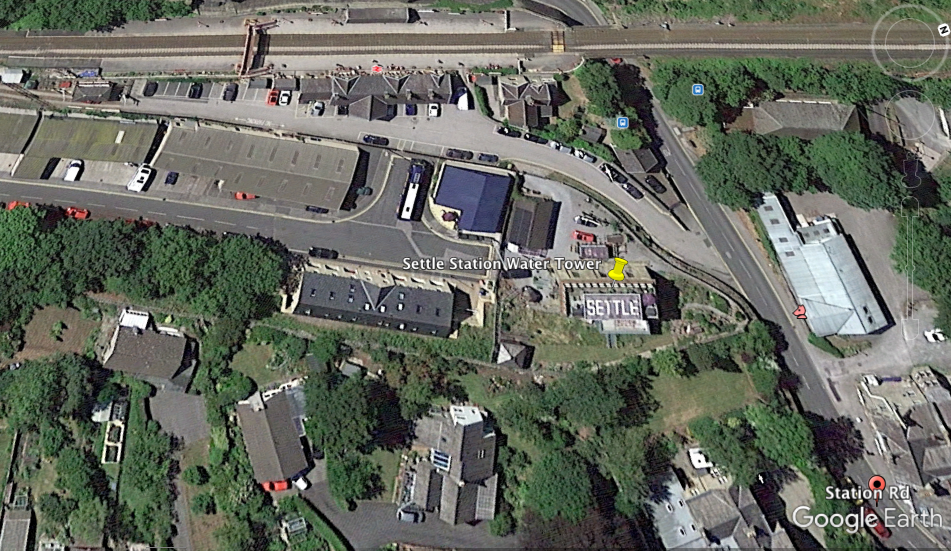 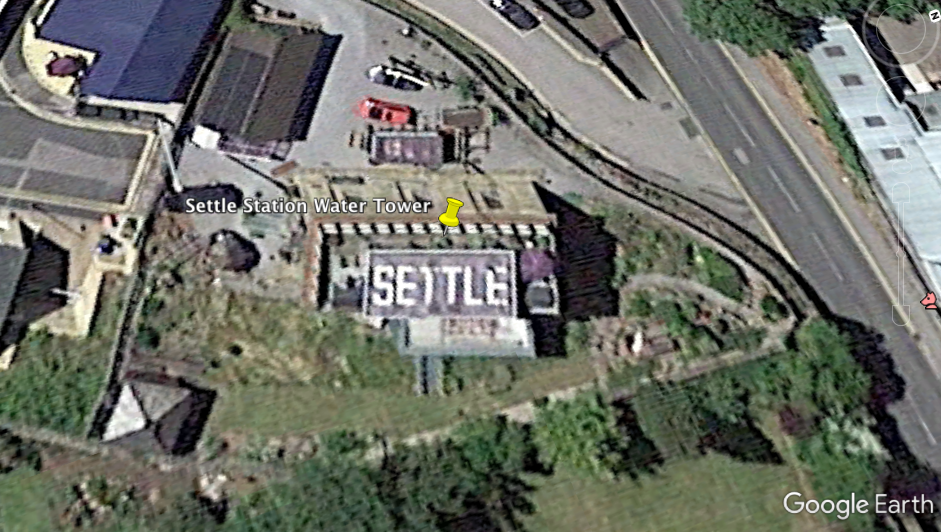 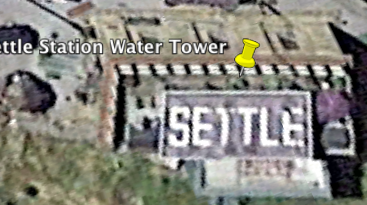 and yes, if anybody up there is unsure of their whereabouts . . . .

It was a Saturday and there is a rail replacement coach parked alongside DCC Concepts, thanks to the RMT union's ongoing strikes.   The top image shows the out-of-line boundary fence between us and the Stationside Apartments next door.   Not particularly bothered but it does look odd.

Posted by Settle Station Water Tower at 18:36 No comments: 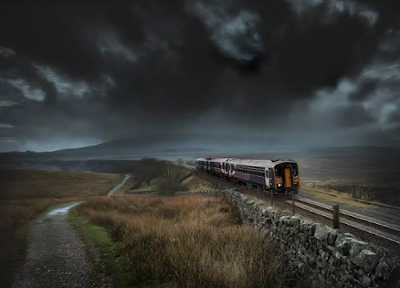 This one by Tim Hancock is entitled 'Chasing the Storm'.   A northbound train is seen approaching Blea Moor with Ingleborough and the viaduct in the background. 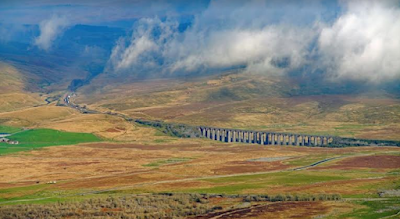 And here's one by Matt Young, taken from the top of Ingleborough yesterday.   Matt fell and may have broken his wrist when descending but reports that he saved his precious Nikon!
Posted by Settle Station Water Tower at 08:47 No comments:

Tomorrow's issue of RAIL carries the list of the Seven Wonders and they are:

We (or Network Rail as owners!) shall eventually get a plaque for display on the viaduct if appropriate or elsewhere.

We are certainly up there among good company.   There was a shortlist of 42 nominations from which the seven eventual winners from which the seven were voted.   Also on that list of 42 was 'the Settle-Carlisle Railway' and 'Blea Moor Tunnel'.   The S&C votes were therefore at risk of being split three ways.   At the final count 'the Settle-Carlisle Railway' almost beat the Ribblehead Viaduct apparently.

Here is a stunning image of the viaduct taken by Bill Lowis a couple of years ago when Tornado was hauling Northern scheduled trains at normal fares.   The crowds on and off the train were phenomenal.   If you click on the image and enlarge it you can see the cars parked on the Ingleton-Hawes road, behind the train. 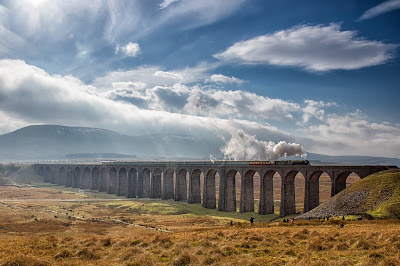 Posted by Settle Station Water Tower at 17:36 No comments:

At first glance this is an unremarkable picture from the Horton in Ribblesdale RailCamera: 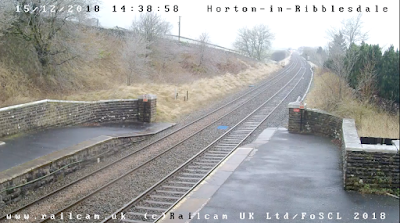 But look at the trees on the left - that is not frost - it is frozen rain, as forecast.

Dubious?   Well here are pictures of east facing and south facing windows of our roof room with frozen rain on the outsides: 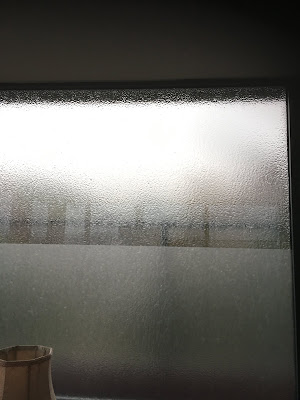 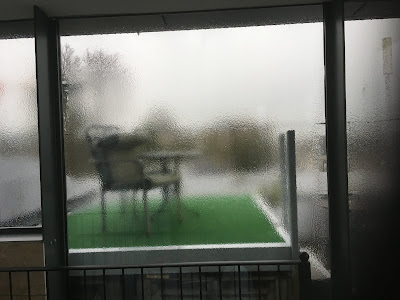 .... and for an encore you have to run the gauntlet of ice falling off the tower.

Posted by Settle Station Water Tower at 15:03 No comments:

We've got ours done and the annual 'we didn't send them one' dilemma returns.   I have noticed two developments this year.

1.  Most of the cards we have received have vertical hinges enabling them to be displayed on horizontal surfaces without recourse to the clothes line approach.   This is most welcome.

2.  A minority of cards wish us a happy 'Winter Season'.   I understand and respect the inclusivity but it's JC's Birthday, for Christ's sake.

Our lovely neighbours at DCC Concepts have chosen to use a view from our roof for their corporate Christmas Card: 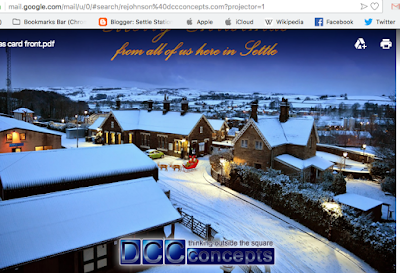 Being clever at such things they even put Santa and his sleigh in the station car park.    The middle of the three snow covered roofs on the left is their very posh showrooms.    As a thank-you for the photograph they modified a batch of cards just for us, without their logo and with our contact details inside.   Who knows, you may get one!

The world's best model train layout is still work-in-progress at DCC Concepts.   I reported on the arrival from Australia of an 18 feet long Ribblehead viaduct ages ago.   Here it is now: 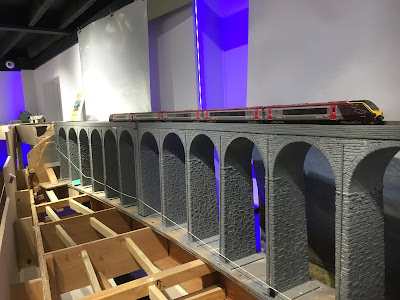 The string along the bases of the columns is the ground level to be followed when they get to that stage.   Behind the viaduct will be a photographic backdrop of Ingleborough and Whernside mountains.   Already impressive, this will soon be another visitor attraction for the line in its own right.

Posted by Settle Station Water Tower at 17:29 No comments:

I have spent the last week or so working against a tight deadline to pull together a six page article for RAIL magazine about a subject I cannot yet disclose.   I shall tell all when it is published.   Promise.   I have rather neglected this Blog as a result

Meanwhile I have been toying with an idea for our main, indeed one and only bedroom.   As we were not allowed to extend the tower windows downwards our three bedroom windows are at ceiling level and the effect is rather prison-cell-like.   Doesn't awfully matter as we spend most of the time in that room asleep.

When we were designing the place we hit on what we thought at the time was a bright idea of setting the wall-thick window bottoms at 45 degrees and putting mirrors on them so that a viewer in the bedroom would look right up those tall windows and as a bonus more light would enter the bedroom.   There was a flaw in that plan.   The mirrors, difficult to access and clean, soon got covered in dust, dog hairs and toffee papers.   Instead we covered the lower parts of the windows with frosting film and all has been well.   We got more light into the bedroom but still no views of the outdoors.

So, what is this bright new idea?   During our six years of residence here TVs have become enormous and cheap too.   Meanwhile CCTV cameras have improved beyond belief.   Might it be possible to mount three CCTV cameras on our roof, pointing in the direction of the three windows, each feeding a big HD TV mounted over the frosted panels?   That way we could almost re-create the window views but on TV screens.   As it happens we have four spare CCTV cameras presently doing nothing so just for fun we have placed a spare huge 4K TV below one window and connected our existing CCTV camera which overlooks the station approach to it.   It doesn't just work - it works superbly: 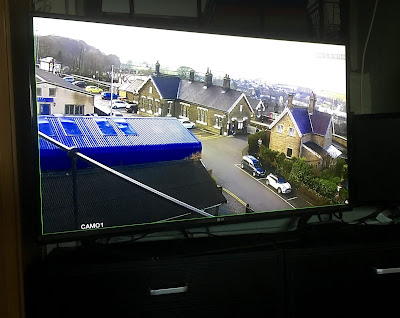 We could be on to something here.   Mega TVs are actually cheaper than windows and a damned sight more heat efficient.   Watch this space.   Our bedroom could soon have electronic windows!

Nobody spends all their time looking out of the windows.    In between times there are HD TV channels to be viewed.

Posted by Settle Station Water Tower at 18:49 No comments: