See the TV programme on 4OD and 'Tele-Tourism'

If you missed the TV programme or want to see it again, click on:
http://www.channel4.com/programmes/the-restoration-man/4od#3365369

It was on 4OD (Channel 4 On Demand) for a few weeks after its first transmission in February, then it was routinely removed.   Now that it has had a number of repeats it has been listed for viewing anytime once again.

The TV programme has brought about a remarkable amount of interest with an almost constant stream of people taking photographs of the tower.

Because it is located in such a public place, alongside a busy railway station, attention is inevitable - and so far as we are concerned, it is really quite encouraging.

Yesterday, I was gardening in the evening sunshine when I noticed a couple taking photographs and taking obvious interest.   They were still there half an hour later when I approached the station drive.   We exchanged pleasantries and eventually the man said "I expect you have guessed - we are Tele-Tourists".

A degree of interest on first transmission was expected.   As the tourist season hots up, interest is definitely increasing.   Feed-back is 100% positive from visitors.   It is rather odd to have coach loads of  total strangers shouting "Hello Mark"!
Posted by Settle Station Water Tower at 08:44 No comments: 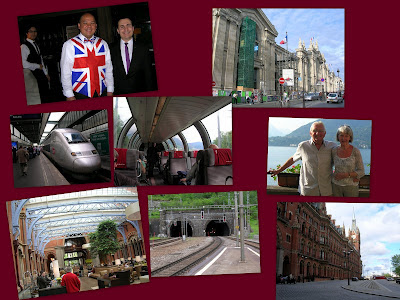 There are few things more boring than other people's holiday pictures - and here is proof, with a railway flavour.   Through the great generosity of daughter Lorna and son in law Alan we went to Lake Como in Italy.   Pictures (click to enlarge) show, clockwise from top left:

1.  Maitre d' Artan (right) and staff at the St Pancras Midland Hotel were in Jubilee spirit
2.  Gare du Nord, Paris
3.  Two old dears on their hotel balcony
4.  St Pancras Midland Hotel
5.  St Gotthard Tunnel, Switzerland.   It was the construction of this tunnel that opened up the Italian Lakes and much of the Swiss Alps to tourism.   We were bused for a few km just here because a landslide had blocked the railway between Zurich and Geneva
6.  St Pancras Midland reception lounge.   We had a personal guided tour of the hotel from Hotel Guide and Historian Royden Stock.
7.  French TGV at Stuttgart en route for Paris Est
Centre picture - panorama car through the Swiss Alps

Sorry for the recent lack of postings. We have been on holiday in Italy - by train of course. I write this on a Leeds bound East Coast train - First Class for £26, Kings Cross to Leeds!

For the past nine days we have had the pleasure Of First Class train travel in the UK,France, Germany, Switzerland and Italy and Eurostar of course. Reactions?


Best Hotel - Premier Inn Kings Cross, despite staying at several 'posh' ones in Europe.   I have excluded the St Pancras Midland Hotel as it is in a class of its own and stands so far above the rest that comparison is unfair.


Best Hotel food - Hotel Maritim Stuttgart, whose breakfast must be without equal anywhere.


Overall reaction - why on Earth does the UK need, let alone think it can afford HS2?


Next big task is the garage block. It may contain some features of a Swiss chalet!
Posted by Settle Station Water Tower at 13:13 2 comments:

Planning permission for the outbuildings

Work can now start on the outbuildings - garage block and summer house following the grant of planning permission yesterday.
Posted by Settle Station Water Tower at 19:59 No comments: 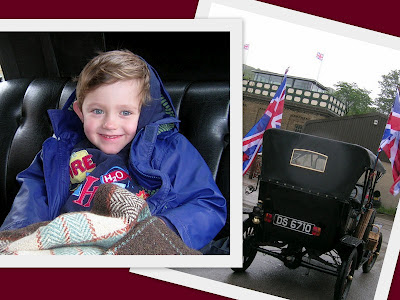 Not too much to report for the last few days as we have been wrapped up with the Diamond Jubilee - and getting quite wet.   For the record though, this is the Model T dressed up with flags with the water tower and its Photo-Shop flags in the background.   And this is grandson Ben (3) wrapped up warm on the back seat of the Model T.   Aaaah.

When I have been able to drag myself away from the telly I have been sorting, assessing and gradually de-nailing the components of the garage / workshop.   It appears to be in far better condition than I had dared to hope for.   We should end up with a very fine looking building that befits the rest of the site and the tower itself.
Posted by Settle Station Water Tower at 09:12 No comments:

A frames are ace

Steve Roberts dropped by this afternoon - jober as a sudge.   Between us we were able to manhandle the six A frames for the garage workshop into three piles of two, enabling close scrutiny.   The main problem with them is not rot - it is contraction of the wood which has loosened the joints - easily remediable.   Joiner Dave Richardson will rebuild one A frame and I shall use it as a template for the rest.

Earlier we had an enjoyable visit from The Restoration People - a group of Restoration wizards from York led by the formidable Imelda Havers.   See http://www.restoration-people.com/  Imelda, along with architect Geoffrey Holland, heritage expert Carolyn Lloyd Brown and Project manager Richard Schofield cast an eye over the water tower and bought us lunch at The Lion http://thelionsettle.co.uk/   A delightful day.