Glancing at the subjects covered in this Blog recently I decided it could be time for a re-focus.  We've had rainwater harvesting pumps, shirt collars, electric heaters and flies.  There has to be more to life than those.

How's this then?  The last rose of summer maybe, picked from the garden yesterday before overnight frost: 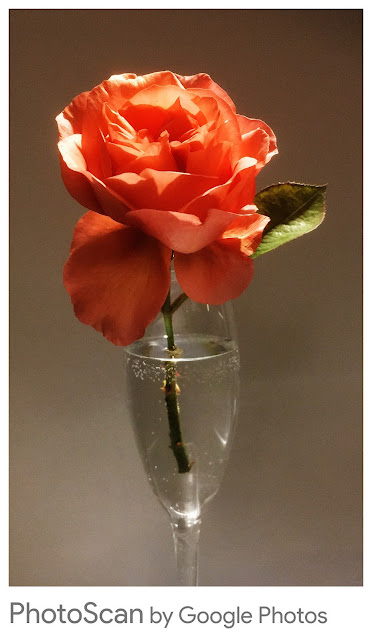 Not sure why but rather than using my iPhone's usual 'camera' app I thought I would try PhotoScan, an app more usually used to photograph documents.  Seems to have worked.OK.

Posted by Settle Station Water Tower at 09:08 No comments:

Yes, flies.  MILLIONS of them in the roof room this year. Not normal houseflies - much, much smaller than that.  Cluster flies they are commonly called.  Very small indeed but under the microscope they look like normal houseflies.  Wings, big multi-faceted eyes, head, thorax, abdomen.  Flies alright.

Each autumn we get them inside the roof room but the problem has increased year on year.

The roof room sits in what was a water tank.  Over time a layer of pond-like vegetation has accumulated on the flat fibreglass surface of the roof inside the tank.  It drains only slowly towards the south west corner of the tank, then down the tank's huge outlet pipe.  In effect we have an increasingly tempting pond in which flies will thrive in due season.

As winter approaches they seek somewhere sheltered and warm.  Wouldn't you?  Conservatories, greenhouses and roof-rooms are ideal.

We are careful to keep the sliding glass doors and the window shut to  minimise fly access in the autumn but still they get in to what amounts to a very well sealed box.  This astonishing picture illustrates the scale of the problem this year: 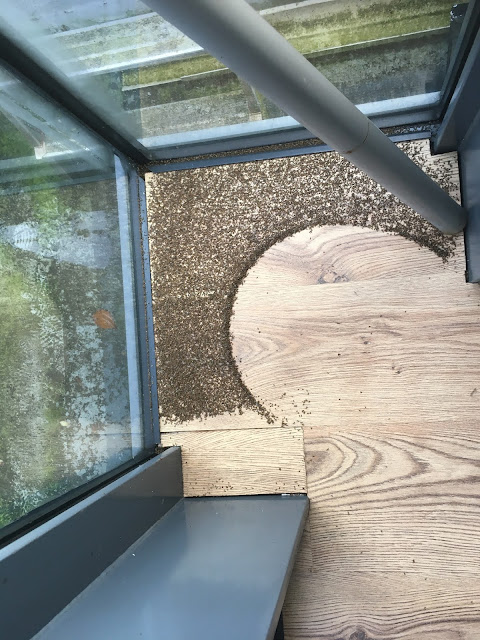 It shows the roof room floor at its north east corner.  The circular clear area is where a vacuum cleaner had been standing.

1. a fine mesh fly-screen over the sliding doors.  That could work IF that was the entry route taken, which seemed unlikely for flies in such numbers.  Expensive too - the salesman's price fell from £3,000 to £1.500 as there was a special offer on.  Quel surprise.  The salesman admitted though that he had never seen anything like this.

For the fifth time this autumn we vacuumed the room and its surfaces clean of flies.  Yet overnight a few more dead flies appeared on the floor areas - mostly below windows.  Towards the tops of the windows cluster flies were dancing about.  The ones on the outsides seemed to be dancing upwards, towards the flat roof overhangs.  Those inside were also dancing, or desperately trying to escape maybe?

By then I had taken the pest controllers' hint and bought half a dozen smoke bombs - small stubby fireworks, 11g size.  I measured the volume of the roof room and landing which called for two of them - simply put them on upturned plates or baking trays, light them, impressive smoke, lock-up and leave for three hours.

In fact I left it overnight.

Next morning the floors had collected more flies, all dead.  NO remaining flies dancing on the insides of the windows but still plenty dancing outside.

Conclusion? Flies are desperate to get in.  Once in, and with a life span of just two or three days anyway they are doomed.

Question?  How are they getting in to a sealed box? I got a clue when changing the battery on the roof-top weather station.  Inside was jam-packed full of mainly dead cluster flies that could only have entered via an incompletely sealed cable access hole.

Conclusion? The roof room may its own openings, small or even quite large.

Sunny Sunday today and I decide to sit and do the crossword in the greenhouse warmth of the landing area of the roof room. Crossword completed and feeling smug but with thoughts of flies and apertures I decide to have a poke and a feel around the seams between huge glass windows, steelwork frames, and the flue through the ceiling above the solid fuels stove.  Et voila: 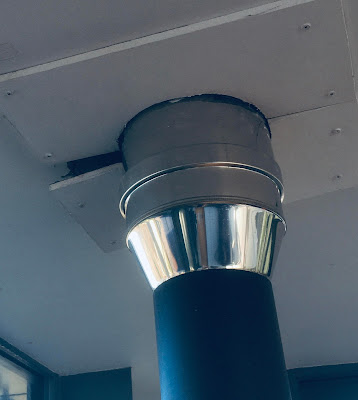 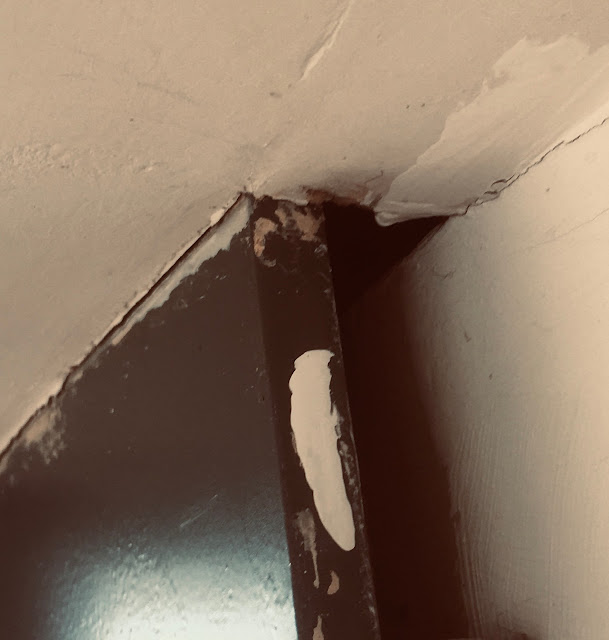 Two of the more obvious (and inelegant) holes through which desperate flies on a mission could enter.  Both big enough for a finger, let alone a fly could gain access.  Not only that, a heck of an inwards gale was howling!  A curious fly would get SUCKED in whether it liked it or not.

Posted by Settle Station Water Tower at 12:40 No comments:

Ever since my brush with death in April 2018 I have never worn a shirt - at least, not a shirt and tie.

My neck has widened to the extent that none of my (many) existing shirts would fit to the extent of buttoning-up to the neck.  Fine for laid-back or day to day open-necked wear but not for funerals and such.

Perhaps it's the titanium hardware holding my head on.

I have managed to navigate life's niceties by and large but a recent funeral brought me round to the need for a proper shirt that fits.  Not being one to splash out unduly I turned to my good friend E-bay to see what there was out there in size 18 (46cm) collar.  The first item on the screen was 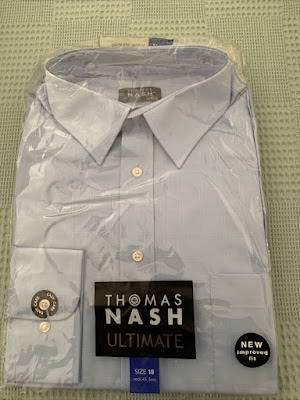 Brand new, still in its wrapping and with a starting bid price of £1.80p.  Throwing financial caution to the wind I placed my bid - £1.80p - and not a penny more.

The auction took its course and mine was the only, and therefore successful bid.

It duly arrived and today was try-on day.  It fits.  Perfectly.  It is hung up in a wardrobe, ready for action.

Just one trouble.  I need to re-learn how to tie a tie.

Posted by Settle Station Water Tower at 20:02 No comments:

There is a lot in this Blog about our rainwater harvesting system (RWH).  If you use the search facility just below the title picture, the tale of woe is well recorded,

Good for the planet and saving a good deal on water bills, RWH is expensive to install and, it turns out, to run.  We found that Kingspan Envireau's controls were complicated and ineffective.  We replaced them with something much simpler and reliable.

At the heart of the system is a massive underground tank with a submerged high pressure Ebara Multigo M40/08 water pump: It doesn't look much in the picture but it is a big and heavy beast at 17kg.  Expensive too with a RRP of £780!  We are now on pump number three - which easily negates any water bill savings and calls into question the economics of RWH.

The idea of possible repair rather than replacement is now being explored.  If repair is not possible we may at least get some answers on why these amazing (when working) pieces of kit are failing.

Nobody nearby repairs such pumps but I filled in one of those 'contact us' forms online to Whisper Pumps in Nottinghamshire.  On a Sunday I had a reassuring e-mailed reply from their General Manager offering to take a look and repair if possible.

Posted by Settle Station Water Tower at 10:05 No comments: