and this lovely lady wandered by.   She is one of three pheasants that visit our garden each

morning to clear up the spillages from the bird feeders. 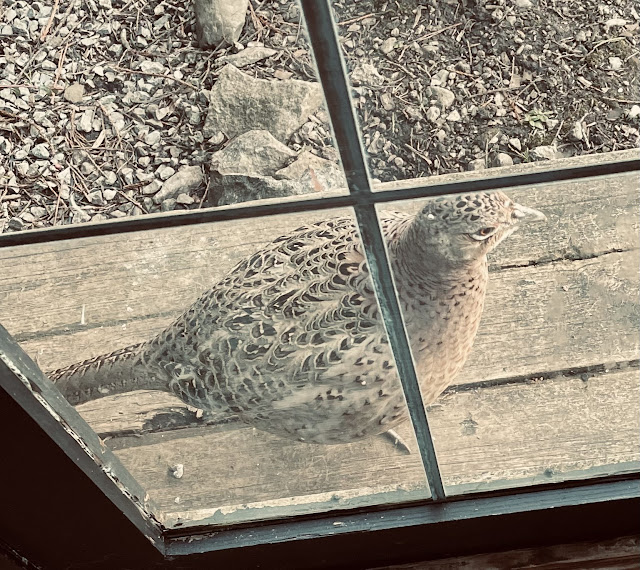 Posted by Settle Station Water Tower at 09:13 No comments:

Wendy's Flying the Flag Too 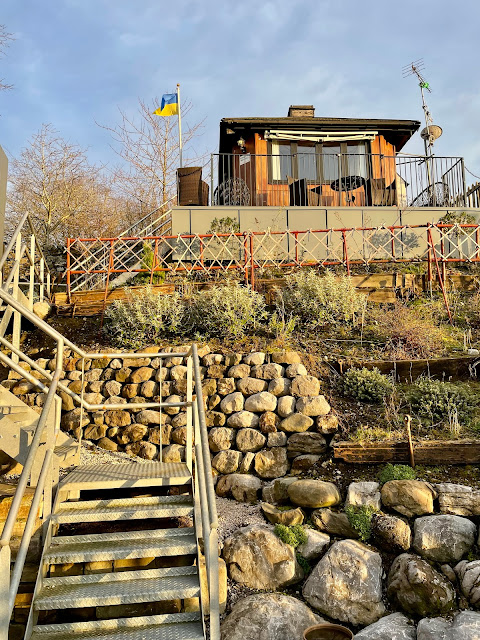 Welcome and long overdue early evening sunshine today and the Ukrainian flag flies by the Wendy House.   I actually bought two such flags from a firm in Ireland and they were here this morning by return of post.  I imagine they are sold out by now so I was probably lucky.

Besides the flag, the picture shows how that steep and hostile embankment is bushing up nicely.  The dry stone walling looks well too in that light.  The greenery between the big boulders if purple aubretia which will soon be a fine show.

Maybe spring is just around the corner?  I actually sat in the WH and read the Saturday paper this morning.

Just come in after seeing the southbound steam-hauled Cumbrian Mountain Express blast through Settle with 'its whistle wide and its throttle back' - en route to London Euston.

Posted by Settle Station Water Tower at 17:53 No comments: 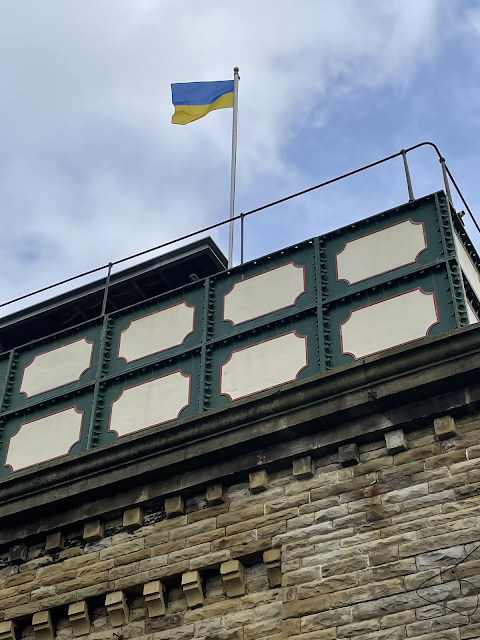 Posted by Settle Station Water Tower at 13:05 No comments:

Our unusual location has many advantages, among which are:

* walking distance from all facilities

* handy for the trains

* Booths supermarket almost on the doorstep

* watching commuters and thanking God I'm not among them any more 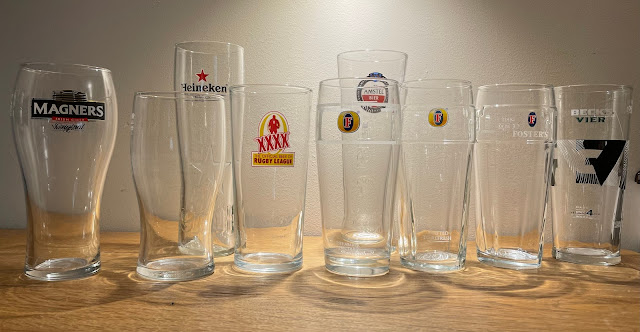 During Covid, alcoholic drinks were forbidden on stations and trains so would-be passengers often ditched their glasses on the handiest place available before entering the station.  Our grass verge on the station drive.  Perhaps the contents account for the stunning show of daffodils every spring?

Posted by Settle Station Water Tower at 09:09 No comments:

Storms Dudley and Eunice - and our Esse.

Dudley and Eunice are two violent winter storms just a day or two apart, then forecast to be snow.  The most problematic aspect of the earlier storms this winter has been electric power cuts.  These are mostly caused by the strong winds blowing down trees and sometimes overhead power cables.  Poor souls in some parts of the UK have found themselves without power for days or even weeks.

Depending on how your home is heated this can mean total loss of heat in winter.  Not nice for us 2000's softies.

Triggered by something I read on Facebook and given our increasing reliance on electricity for heating I have been thinking how we might manage if we lost power for a prolonged period.

The gas central heating would go off - electric pumps and motorised valves would stop.   Electric radiators obviously go off too.   What's left for heating and cooking then in this massive ice-box in the event of a prolonged power cut?

1.  A wood stove in the roof room.  It is small but it works.  Messy though and fiddly.

2.  A small camping gas hob for cooking - I bought this for Christmas for Pat last December.  Romantic old sod I am eh?

3.  A gas barbecue which lives outdoors up in the tank.

4.  A flue-less gas fire in a corner of the main lounge.  It is a cast iron affair with a catalytic converter to enable it to operate in our large main room, without any external flue.  I have mentioned it in the odd post before.  Mains gas fuelled it does not have any electrical connection. 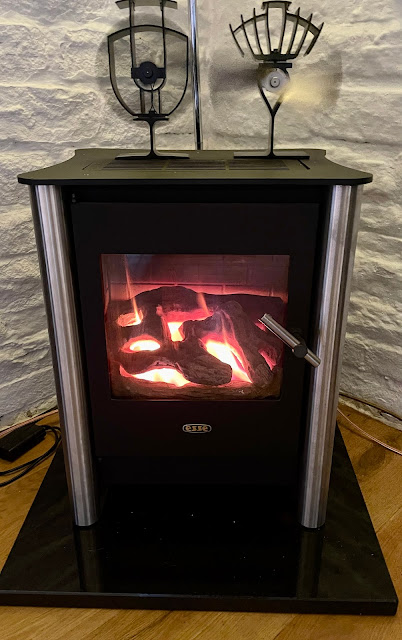 It has a 5 kilowatt output and on full bore it doesn't half chuck out some heat.  89% efficient apparently too as a solid fuel stove with a flue.   Presumably nearer 100% efficient without a flue.  You can see that we have a couple of those thermo-electric fans on top which direct the purified flue gases and heat out into the room.   We rarely if ever use it now that the underfloor heating in the main room really works, being the sole underfloor loop now taking the entire heat from the gas boiler.

So rarely have we used it in anger that its window had clouded over, almost obscuring the view of the flames.   What looks like a handle to open the glazed door is purely for decoration and I could not see how to open it to clean the inside of the glass.  Frustrating.

However, it was made by the local firm of Esse - who have been making stoves and ranges since 1854 and are still going strong.   Their factory is the delightfully named Ouzledale foundry in nearby Barnoldswick.  I gave them a ring, something you can rarely do direct to a manufacturer these days.  A helpful lady called Marie answered the phone.  She did not know the answer but handed me on to David who asked me if it was a 500 or a 525.  "Don't know" said I.  "OK, what do the legs look like?" asked David.

Strange, I thought but I told David that it had full-length stainless steel tubular legs.  "Say n'more - its a 525.  Easy." Said David.  "Look very carefully below the dummy handle and you'll see the head of a camouflaged Philips head screw.  "Unscrew that and you're in".   And I was.  "Clean the glass with scrunched up newspaper.  Don't over-tighten the screw when you put it back.  Just enough to create a seal and to stop the door rattling".  That I did and the photograph shows the result.

Hugely satisfying and excellent customer service from Esse.  David and I had a good old natter about the upcoming storms and the need to have more than one source of power.

When we lived at The Folly our main cooker-cum-central heating boiler was a massive great Esse gas range.  We loved that and miss it a lot.   We like Esse.

Posted by Settle Station Water Tower at 18:33 No comments:

Well, at least I still have lots of hair to cut.   As with others no doubt during Covid I have cultivated a slightly longer style of hair and I just let it grow until s.w.m.b.o. tells me to go and get it cut.  On Tuesday (market day in Settle, but only since 1248 or so) and on advice, I always go to the barbers shop on a Tuesday morning.  Most often there are no 'patients' waiting and this Tuesday was just such a day.  Duncan was busy on the phone so I took the opportunity to take this picture of a good old no nonsense English mens' barbershop.

Actually they do womens' hair too nowadays - and they even take credit card payments.  My haircut was £9.  I mention this to make readers in the south feel jealous. 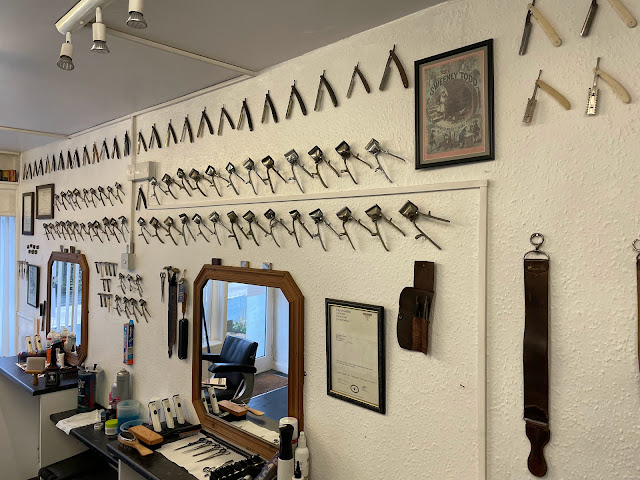 Posted by Settle Station Water Tower at 14:26 No comments: