Settle's Church Viaduct is an iconic feature of the town but its six arches were fast becoming obscured by trees: 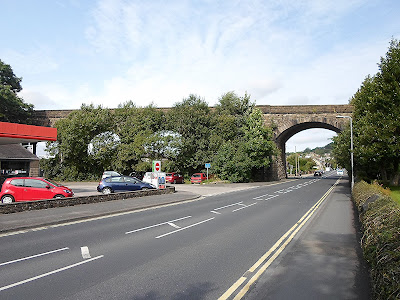 Earlier this month I mentioned this to Network Rail's Track Maintenance Engineer Gordon Allen who  took up the case instantly.

During this week a small detachment of the Orange Army from Carlisle struck: 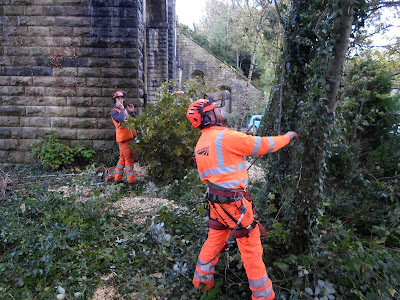 And within two days Settle had its viaduct back again: 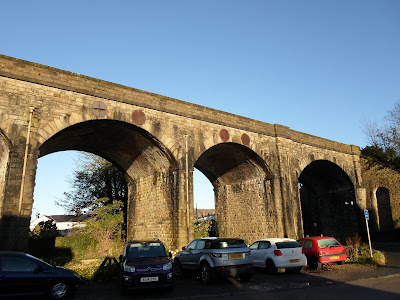 Posted by Settle Station Water Tower at 08:18 No comments:

Grandson Ben is in Residence 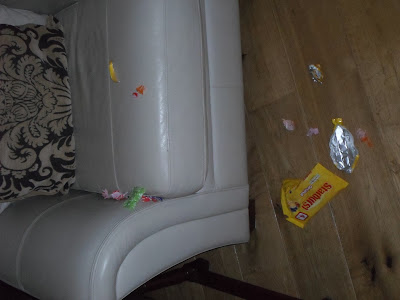 Click to enlarge.   Note rotation - the house is a tip

But we love him really.

I am sparing you the bathroom fall-out.   Little boys cannot aim well.   Perhaps it's a bit like firearms - the shorter the barrel the less the accuracy?
Posted by Settle Station Water Tower at 12:56 No comments:

London to Glasgow the Unforgettable Way

I have just posted this on Facebook and Twitter so I didn't think you should be denied it:

Click here for the best railway journey in Britain

Our Rain Problem in Pictures

When we first bought the water tower there was a serious problem with rain getting in, to the extent of it streaming down the insides of the outer walls.   The obvious and visible fault was that there was a gap between the base of the iron tank and the decorative stone plinth below.   Attempts by our builders and then by ourselves had failed to fill the variable gap effectively.   Then we took advice from sealant specialists Adshead Ratcliffe & Co Ltd who supplied their high modulus Arbomeric M20 which solved that problem absolutely, if inelegantly*: 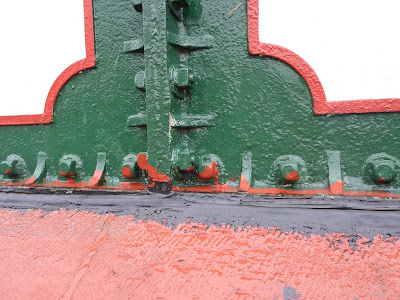 Rainwater then flows down a sloping (red painted) stone and onto a less steep ledge which provided a walkway round the tank for the bold / brave or barmy: 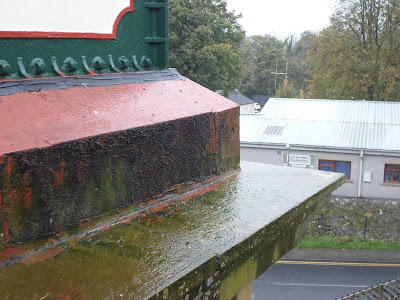 at the edge of that ledge most, but by no means all of the water drips off and falls to the ground, well clear of the tower walls below.   Remaining water has further opportunities to drip away as more overhangs are encountered: 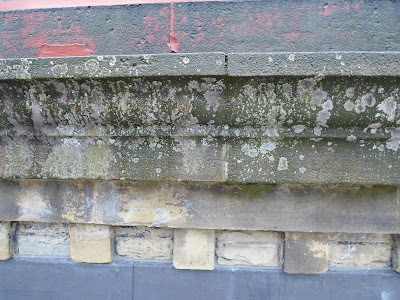 These pictures were taken during heavy rain this afternoon and it can be see that the combined system is very effective indeed in shedding the water - to the extent that the tower walls are perfectly dry: 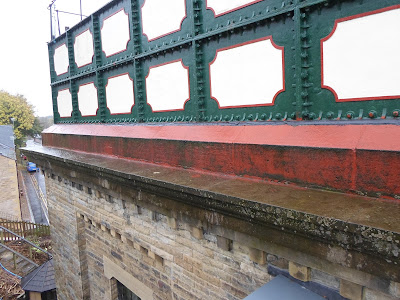 The problems only arise in driving rain when some of the rain makes it to the lowest of the ledges, immediately above the square support or dentition stones.   Any water that does not fall off then gets blown against the top of the wall itself.   The increased wind pressure outside finds any crack in the mortar and water gets sucked towards the reduced air pressure within.

Nowadays a drip groove cut into any or all of the overhangs would deal with the problem most effectively.   There appear to have been attempts to deal with the situation by applying tar or bitumen to the stonework between the dentition stones but this, besides being unsightly, has failed: 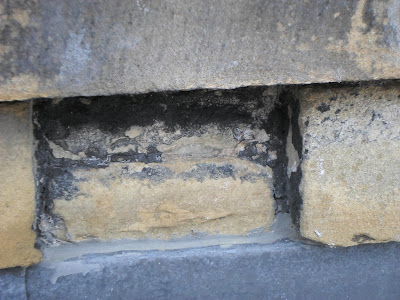 In short, what appears to be a decorative plinth of the tower is in fact a cleverly devised and most effective way of shedding the water away from its upper walls, most of the time.

The remedy seems to be to remove the old tar (much of it scabbing off anyway), to rake out the mortar between the dentition stones  and to replace it with the sort of filler that was used with success between the iron tank and the tops of the plinth stones, in a matching colour.

Unless you have any other ideas????

Posted by Settle Station Water Tower at 16:08 No comments:

Trouble with towers, they are tall.   Ours is about as short as they come but it still takes effort and some nerve to reach the ceiling of our main room and the parapet and tank from outside.

I got myself a scaffolding tower of sufficient height to paint the main room's ceiling.   It has featured here already.   I am now the proud owner of an extension kit and substantial outriggers to reach the masonry under the water tank: 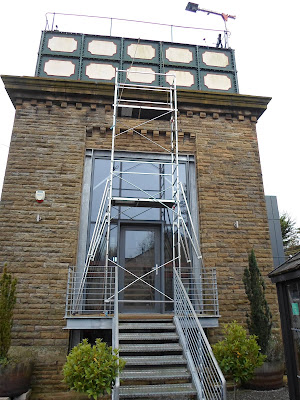 We have a slight water ingress problem when the wind blows strongly from the south.   Rain hits the south side of the tank and runs down onto the massive overhanging stone plinth below.   Some of it gets into the joints between the stones and then into the top of the wall causing localised dampness  and occasionally puddling on the floor below. 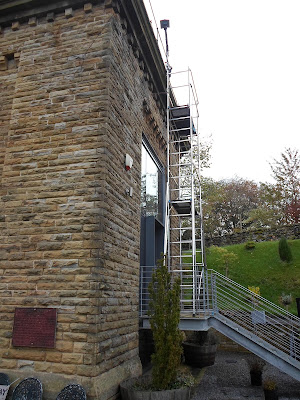 The extended tower gets us right up to the problem.   Local roofer James Holgate is en route to advise and fix.    The tower is sitting on the front entrance platform, from which it is slightly taller than necessary but the overall height will be ideal for the rest of the tower from ground level where we have paving all round for this very purpose.

And now a set of scales to add to the railway ambience.   Robert Staveley was having a clear out and was en route to scrap these when inspiration struck.   Thankfully, he diverted to the water tower and dropped them off.    They were familiar items at every staffed railway station that could accept goods, back in the day.   They will weigh up to 5 cwt and are in fine working order.    They are also immensely heavy.

In case you are into these things they are a type 600 weighing platform, made by F.J. Thornton & Co Ltd of Birmingham.    If they do not achieve EIDAS* they may find their way to Settle or Ribblehead stations.

That's the next restoration project sorted. 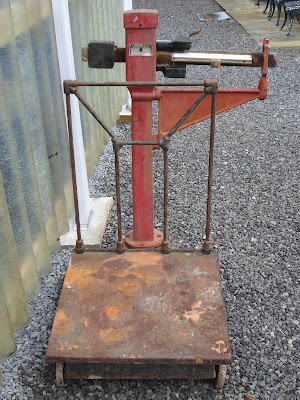 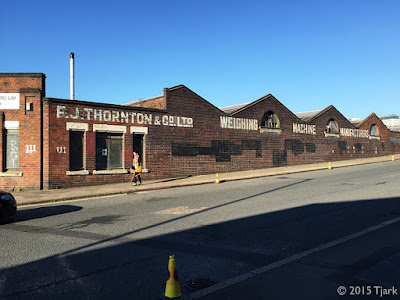 Posted by Settle Station Water Tower at 11:03 No comments:

One of the consequences of living in a triple glazed virtual castle is that you are insulated from the sounds of the world outside.    Last night the UK suffered the wrath of Hurricane Ophelia - an unwelcome export from the USA.   Here you can well see the extent of the devastation that greeted me as I went dog walking this morning: 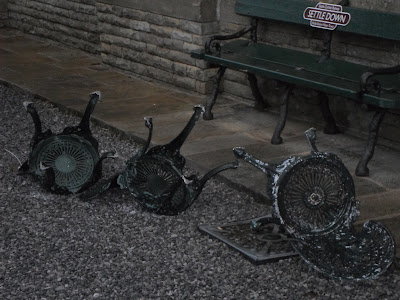 and that was the extent of it.

Below is my new lean-to car port, since yesterday equipped with a translucent side wall - with air gaps top and bottom.   It proves to be hurricane proof. 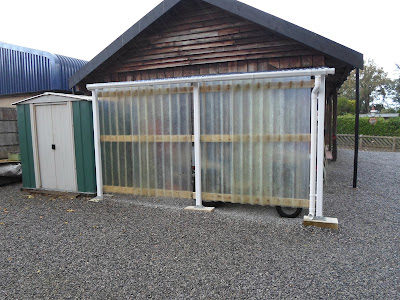 Posted by Settle Station Water Tower at 09:21 No comments:

This lovely old picture popped up on Facebook today.   The text tells the tale.   What took my eye though was the water crane at the end of the platform.   The location is Skipton and that is where what are now Settle's two water cranes came from - see several earlier posts.

We have few pictures of the water cranes in situ at Skipton but this is unlikely to be bettered.

There it stands forlornly, a soon to be obsolete relic of the steam age, alongside the shape of things to come.   The S&C's trains look much the same today - charmless boxes on wheels.

On the right of the picture are catch points to deflect any runaway train away from the down main line.

Well, the water cranes have survived but I bet the train hasn't.
Posted by Settle Station Water Tower at 07:56 No comments: 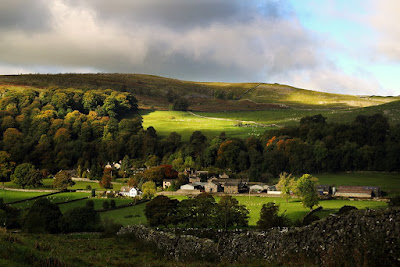 Stackhouse is a small place on the outskirts of Settle - walking distance from us.   It is the first place worthy of a name on one of our many routes around here with the Model T.   This lovely picture was taken a couple of days ago by former Dalesman editor Paul Jackson.


Posted by Settle Station Water Tower at 22:22 No comments:

An Outing to the Goat Gap Cafe

On the one fine day of this week we decided to have a lunchtime run out in the Model T to the Goat Gap cafe on the A65 between Clapham and Ingleton.   The A65 would get us there directly but it is no fun and there is a gentler route by country lanes via Giggleswick, Lawkland, Austwick and Clapham along which you can just chug-chug, potter and take in the countryside.

The Goat Gap cafe used to be a Little Chef.  It closed some years ago and has lain forlorn until March of this year when it re-opened, following a stunning refurbishment, doing fine food and wine cafe style.

It is highly recommended, but that's another story.

In the middle of nowhere en route my 'phone rang.   I pull over and answered it.   As coincidence would have it we were at a spot near the village of Eldroth, overlooking the little used but important railway line that connects Settle junction with the West Coast Main Line at Carnforth, near Lancaster.

I switched off and continued the call, which proved lengthy.   The scene in front of us was idyllic and the sun was on our backs.   Nothing was moving on our country lane nor on the railway.    There was silence.   My interlocutor was at work in his solicitors office in the City of London.   Conversation was businesslike.

After some minutes Pat interrupted.   "Look!" she shouted, pointing to our left.   Curling lazily upwards was the unmistakable shape of a cloud of steam.    I interrupted my call with a description of the unfolding scene, to the delight of a London lawyer.   It was indeed a steam engine, towing only its support coach, en route from Carnforth to Hellifield and onwards to who-knows-where.   Our old car on the skyline would have been as unexpected a sight in the bucolic scene as the train was to us.   We waved, I commentated and there was a wave and a whistle of mutual admiration and respect.   "What was it?   Did it have a name?", London asked.    "Just an 8F or a Black Five" I lied, pretending to know the difference.   That satisfied London and conversation moved on, with only thinly disguised envy seeping northwards.

In hindsight the scene would have been worthy of one of those jigsaws;  you know the ones - happy people in old car, picnicking by a railway line with a steam train passing, everybody at peace with their worlds. 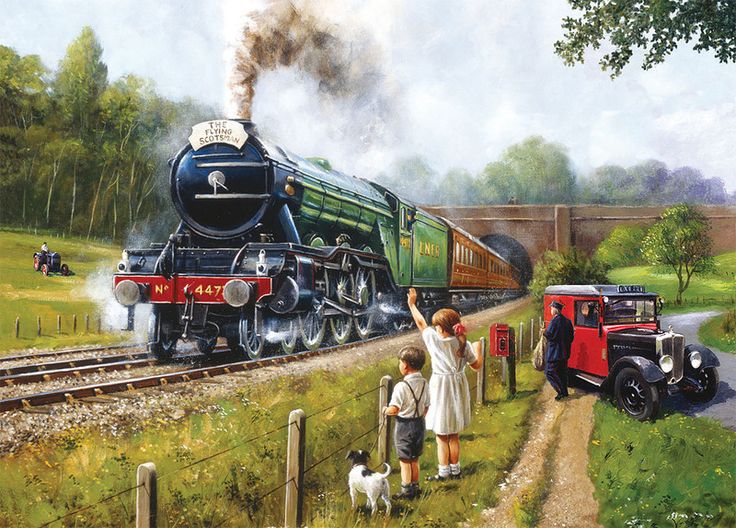 At the other end of my call was Edward Album - heavyweight London lawyer who tied British Railways in legal knots in the 1980s when they were trying to close the Settle-Carlisle railway line.   Unknowingly, the crew of that little train had made his day.


Posted by Settle Station Water Tower at 10:07 No comments:

Our Lounge Just Got Twice as Long

Our lounge, if that is the right word, is the entire middle floor of the water tower, less the space taken up by stairs and the lift shaft.   It is enormous as lounges go - 52 feet long by 20 feet wide.

Clever arrangement of furnishings visually divides it into a dining area at the southern end and a bigger sitting, reading and TV viewing area to the north.

Daylight is inevitably limited to that which comes through the original tower windows, plus what amounts to a large glass wall in the south end.

Settle, along with most places nowadays I imagine, has a buying and selling website where you can have a clear out or drop on a bargain on your doorstep.   Many a time the items are simply free to a good home.   So it was that I happened upon a very large bevelled glass mirror in a heavy black frame.

It would be far too large for most living rooms but it suits our monster lounge admirably: 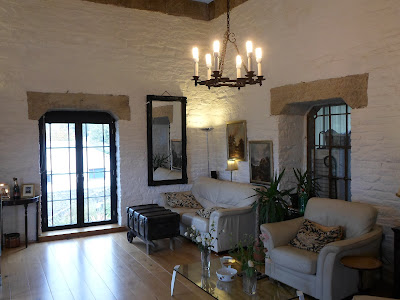 There it is on the far wall.   Depending where you stand the lounge now appears 104 feet long!
Posted by Settle Station Water Tower at 17:07 No comments: