Sound on and you will hear the whistle blowing a respectful salute for Derek Soames at Settle churchyard then a full blown fanfare at Settle station.

The w.h.o.b.* in the blue jacket at the station doorway is me.  Once a train-spotter etc.

Posted by Settle Station Water Tower at 17:03 No comments:

Previous posts have made mention of the serious problem of tiny flies in the roof room - millions of them, mainly dead, accumulating on the roof room floor.

Question is - how are they getting in?  I think we now have a definite answer - via the flat roof overhangs.  I have spent a good deal of time this winter locating the few internal ways-in.  Mainly these have been constructional gaps around the angle where the glazed walls meet the internal ceiling.  Also around the sunken ceiling spotlights and where the wood burning stove flue goes through the ceiling.  It has been great fun locating those areas with a flickering candle flame on windy days, then sealing any gaps up.  The recessed ceiling lights have been replaced by surface mounted LED panels, carefully sealed where the wires necessarily come through.  By far the biggest gap was around the flue - sealed with fireproof sealant.

In theory that should suffice but in all conscience to flies! I want to stop them getting into the roof space in the first place.  The space is shallow and necessarily ventilated via deliberately placed vents under the overhangs.   These have probably been the likeliest way in.

Today has been springlike so I removed one of the aluminium panels underneath the north west corner overhang.  It was quite a revelation! 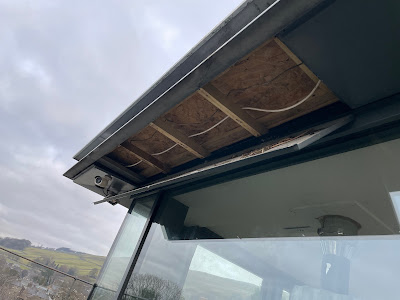 By chance, you can see the now sealed gap around the flue of the wood stove on the ceiling inside the window, 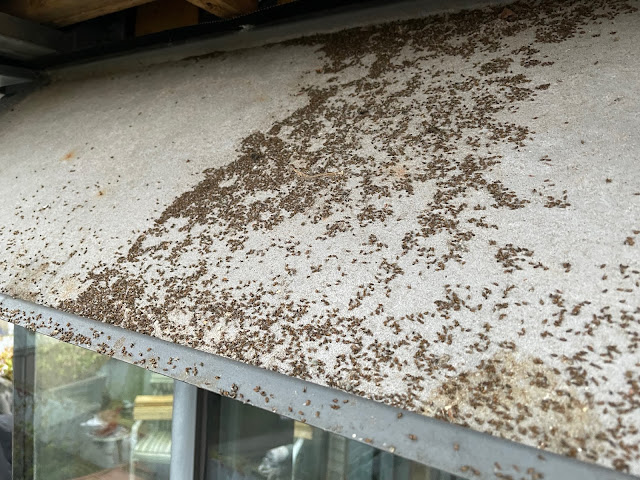 Quite a few clues there eh?  As it happens there is no vent in that panel.  It is not meant to form an airtight seal either so the little devils could have entered via the panel edge gaps or through the vents in adjacent panels.  Thinking caps on for the solution which allows ventilation but denies access to these tiny flies.  Mosquito net material will be researched methinks.

Posted by Settle Station Water Tower at 17:48 No comments:

Temperature Blanket 2021 - From the Weather Station!

A lovely local lady called Gillian Collins has been very busy during the memorable year 2021.  Not only is she a Covid vaccinator who has possibly jabbed half the population of Settle, she is a crocheter - on quite a scale.

Every single day in 2021 she has noted the mid-day temperature reading on the Settle water tower weather station.  Not just that, she has crocheted the  next line on the now completed blanket in a colour that reflects that day's temperature reading - every day between 1st January and 31st December 2021!

The weather station was off-line for a short period mid-year (my fault) but, undaunted Gillian used the BBC reading on those days. 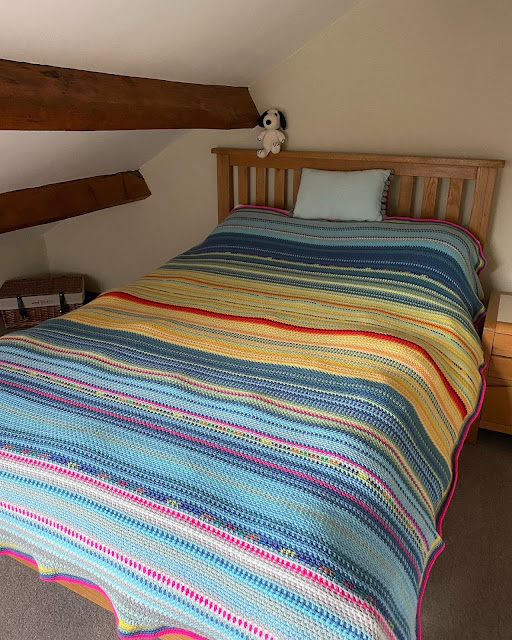 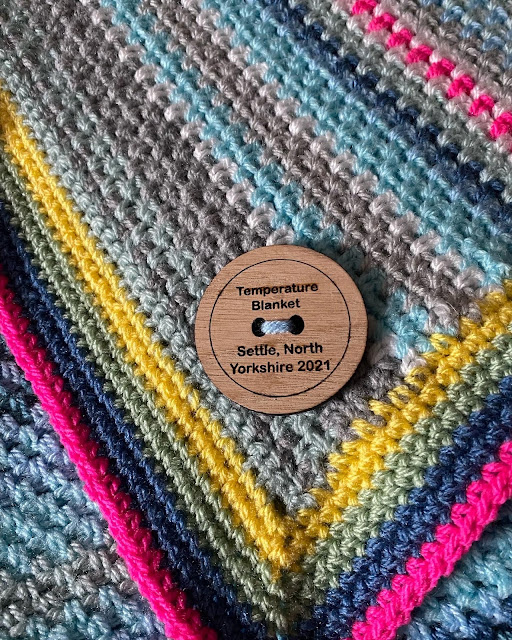 And a very nice finishing touch too.

Posted by Settle Station Water Tower at 15:30 No comments:

Holidaying in Rochdale? Then Come to Settle

I have set up my Google account to e-mail me whenever 'Settle Station Water Tower' crops up anywhere.  Perhaps once a month or so that search triggers something.  Most often it is a false alarm with good intention and the reference is to something else but containing all of those four words, each of which is fairly common in the English language, that creates a fair chance.

Imagine my delight and surprise to discover this week that we are listed among the places of interest in Rochdale - a town in Lancashire and 43 miles away:

Trip.com
Top Things to do In Rochdale 2021 · Urbis Tower · City Airport & Heliport · The Pigeon Tower · Mam Tor · Bamford Edge · Surprise View · Settle Station Water ...
Just to make sure I followed the link and, sure enough, it's us alright.   Here's Rochdale: If ever you're there on holiday do drop in and see us.
Hang out the flags and let the church bells ring  We've made it.
Posted by Settle Station Water Tower at 16:13 No comments:

A news item yesterday about atmospheric pollution in Delhi reminded me about a posting I did on this Blog in January 2017.  It got more viewings than just about all the rest of my postings put together.  The news item made reference to the black ooze that nowadays comes from the lungs of deceased Delhi residents - simply by living there.

I came across this image online at http://fantasystock.deviantart.com/art/Black-Polluted-Snow-116374211 : 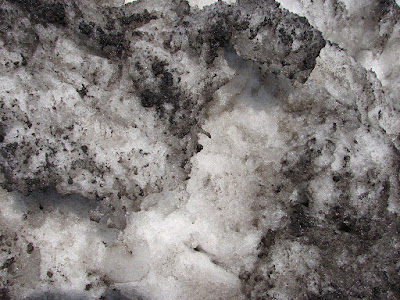 click to enlarge
It is reminiscent of my childhood in Leeds.    Falling snow was then, as now, magical.   The dirty old city of Leeds, overnight usually, was blanketed in pure white.   These days the magic remains, visually at least.   There may be traffic chaos, especially in and around London but the stuff stays white for days and possibly weeks, topped up and refreshed from time to time.

Not so in my childhood.   I am talking the 1950s.   Coal was king.  Fog was smog.   Blowing your nose into a white handkerchief was an experience.

Something was seriously wrong with the air we were all breathing.   The Yorkshire Evening Post frequently carried letters from an enigmatic correspondent 'Fresh Air - Shadwell' who turned out to be a chest physician.   The constant message of those letters was that the very air we all breathed was killing us.   What nonsense we thought.   Air was air and reality was reality.   We had to be warm in winter.   The very fabric of the city was black - the buildings long term and the snow very soon after falling.

It was not the age for people to be concerned about the environment.   Fresh Air - Shadwell was to the 1950s in Leeds what Mrs Mary Whitehouse was to later decades.   Google her if you must.

My faltering career aspirations took me into the mortuary of St James' Hospital in Leeds during  holiday jobs as a hospital porter.   Porters were not over keen on 'carry-outs' as they were called.   Not me.   I was curious and fascinated by the situation.   On the North side of 'Jimmy's' there were wards upon wards of patients in what were then called Nightingale wards asleep, agape, awaiting their ends.

There had to be more to life, and death, than that.

On day shifts I would hang around in the mortuary, declare my interest in medicine, and be allowed to witness post mortems.   Many of them.   They were pretty routine and mainly involved slicing up vital organs to observe abnormalities.   Two of the organs stick in my mind - the brain and the lungs.   The brain often yielded an immediate and obvious cause of death.   The lungs less so.   What was blindingly obvious about the lungs was their colour.   What should have been pink was black.   Very black.   Oozing black ink or so it seemed.   'Leeds lung' I remember a pathologist calling it.  Of course, smoking, then routine, was a factor but for everybody - simply everybody - was the inescapable reality that the very air we breathed contributed to 'Leeds lung'.    Nobody, but nobody, was immune.

Clean air legislation, regarded by many at the time as cranky, was enacted.   Smokeless zones came about and, eventually the coal industry itself shut down, amidst political upheaval and social unrest which rumbles on to this day.

The fact is that nowadays, when it snows it eventually goes.   Without the seemingly weeks of miserable and increasing depressing blackness of my childhood.

I have mentioned smog.   That, for us, is a thing of the past but not so the world over.   Smoke amalgamated with the water droplets in the air which weathermen nowadays call fog.   The result was a yellowish dense ground level cloud of an intensity nowadays unimaginable.   There used to be an expression 'You could not see you hand in front of your face'.   Well, not quite;  but nearly.   In daylight hours life went on but when darkness fell the expression became true.   Movement was impossible without lights - street lights, torches or vehicle headlights.   In Leeds the only reliable vehicles were the trams.   They ran on rails and did not need steering.   Their drivers could navigate as if by instinct.   The dips in the line and the points were their clues to location.

My school was near the centre of Leeds and my usual way home was on the bus.   In the most severe smog I can remember the buses were abandoned.   I contacted my father, whose job was in the middle of Leeds.   We met at the car park where his car was parked, more by feel than sight.   He drove and I walked ahead, my torch pointing backwards towards the car.   I followed the tram tracks all along York and Selby Roads  to home in Halton, my school scarf wrapped around my mouth and nose.   At major junctions there were policemen, lit by flares, wearing white coats, directing what little traffic that was moving.

When we got home, hours late, we settled down in front of a hugely welcome coal fire . . . .
Posted by Settle Station Water Tower at 08:57 No comments: