Since the easing of COVID restrictions I have resumed my voluntary role as an On-Train-Guide on the Settle-Carlisle Railway.  It is my only remaining contact with the Friends of the S&C besides being a member.  I enjoy it immensely and it is spiritually rewarding when people go out of their way to say thank-you when we reach our destination.  Sometimes they force money on me which I reluctantly accept.  It gets spent on S&C related things around Settle.

One kind lady went a step further and put a lovely public 'thank-you' on Twitter this weekend.  Not sure which train she was on - I have done three return trips this week!

As posted it showed a cropped picture of the On-Train-Guide and I couldn't resist clicking on it to enlarge it.  Lo and behold it was me: 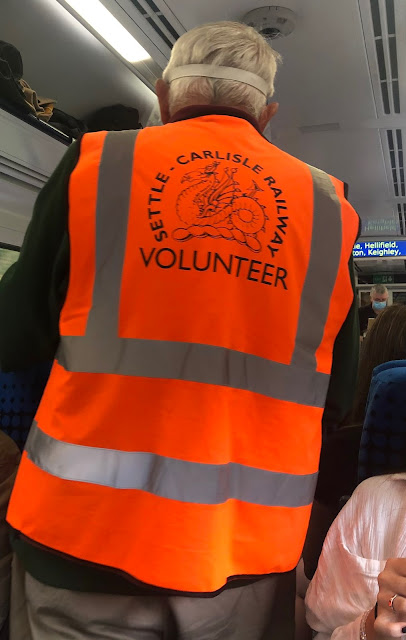 Happily she had chosen my best side.  The band round my head is for my face-shield.  I use a hand-held microphone and wireless loudspeaker which enables an entire carriage full of people to hear my commentary without me spitting COVID at them.  I wander up and down the carriage so that I don't block the same people's views all the time.

My repertoire, developed over a couple of decades, tends to be light hearted and participational.  Not too technical but ensuring that passengers get to see those sights they would almost certainly otherwise miss.

This is what the kind lady posted.  Modesty almost prevents me from posting it on this Blog.  Almost. 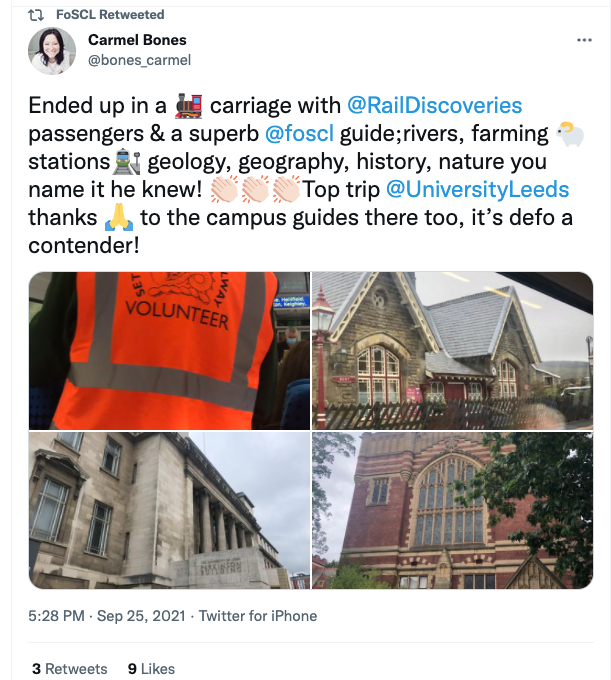 Posted by Settle Station Water Tower at 09:44 No comments:

Not Just a Lift - Now a Goods Hoist Too

Among the advantages of living in a former railway water tower is that your ceiling is among the strongest ceilings possible - it consists of the underside of a massive water tank built to hold 43,000 gallons of water.  That tank rests on absolutely massive cast iron beams at just 4 ft centres.

The ceiling easily supports our 13.5 tonne roof room and, potentially, much more besides.

We could, if we so wished, suspend enormous weights below it, not that we would particularly want to,

Some years ago in a moment of weakness I bought a rope hoist from Bretton Lord, as a youngster the star of the wonderful funny/tragic film 'Lad'.   I really DO recommend you view it

It was useful for a while to hoist stuff to and from the garage/navvy hut loft but it was frankly too long for that lift so we had to deal with many metres of thick and heavy coiled-up spare rope.

Nonetheless it was a fascinating piece of yesteryear and useful kit.

As part of operation-clear-up we were worrying what to do with it when inspiration struck.  We have occasional need to lift or lower heavy items between the three floors within the tower and our atrium at the south end runs the full height of the tower.  So would Bretton's (very heavy) rope hoist fulfil that occasional need?

Yes, if we could devise some means of securing it to the 'ceiling' by its massive upper hook.

Well, this week the Last of the Summer Wine gang from the signal box came to the rescue.  They were able to firmly wedge a section of scaffolding pole between two iron beams high above the atrium and to hang the immensely heavy block-and-tackle from it.  The 68m rope turned out to be of perfect length for the lift. 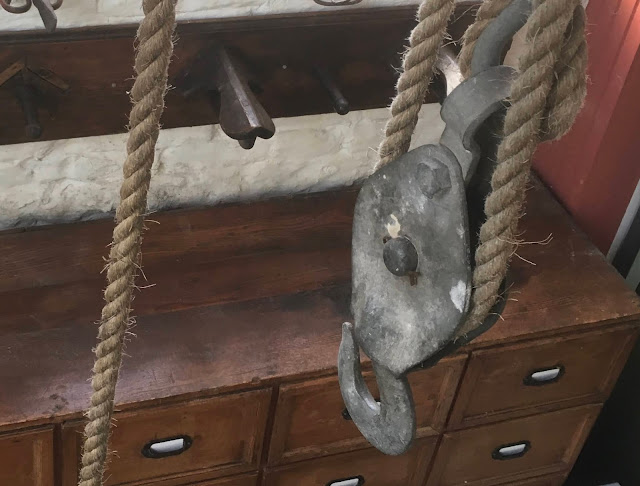 Not the sort of thing everybody needs or would want in their home but perfect here.
Also in the picture are harness hangers from the days when the tower served as wartime stabling for heavy horses and an incredibly useful and capacious industrial chest of sixteen drawers.  In harmony with it surroundings too.
Awesome and useful.

Posted by Settle Station Water Tower at 19:06 No comments:

Finally got round to finishing the small deck area outside the sliding window door of bedroom 1 at the north end of terminal 2.  The ground slopes steeply and it is almost sunless.  A shady outdoor retreat therefore on one of those rare very very hot days.

Frame made from scaffolding parts with decking boards bolted to them with stainless steel chunky U-bolts.   Covered in that green stuff that fruit and veg men use to display their wares.  The cast iron corner posts for the railings are original Midland Railway ones that once held railings onto the bridge that crossed the water tank,  It finishes off that bit of the garden neatly: 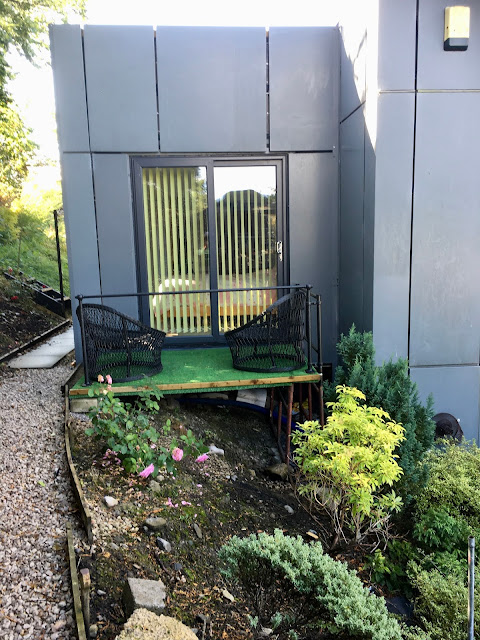 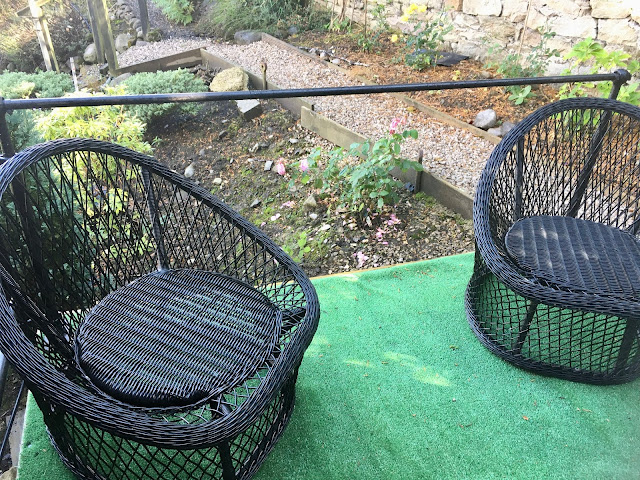 I should add that the deck is not connected in any way with the main building.  It is free-standing.

Talking of the Midland Railway, Pat is now its Chairman.  Yes really - The Midland Railway company no longer exists since the railways were nationalised 100 years ago.  FoSCL's astute solicitor, Edward Album, bought the MRC Ltd when the line was under threat of closure all those years ago - 'just in case' it might be useful one day and to prevent scallywags from buying it.  It has been resurrected and Pat is its Chairman! 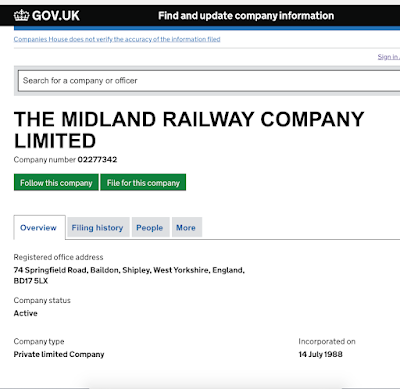 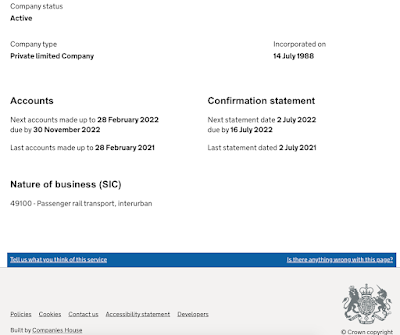 Posted by Settle Station Water Tower at 09:50 No comments:

Just found this for sale on E-Bay: 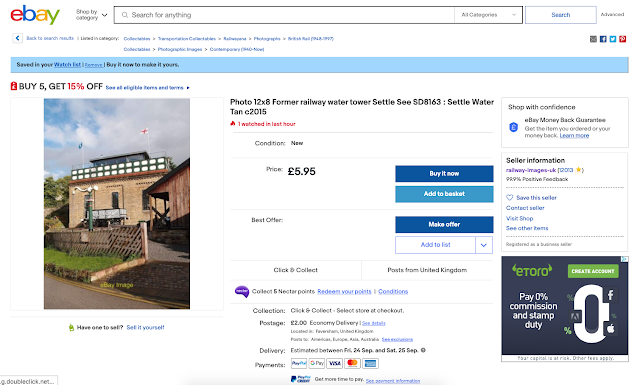 I doubt it will be a best seller.

Posted by Settle Station Water Tower at 12:14 No comments:

That's my excuse anyway.  The steep embankment below the Wendy House / Man Cave / Terminal 3 and its amazing sun terrace is only safely accessible by abseiling down and hanging on to heavy duty chains securely anchored into the ground.  Gardening it is a problem.

The plan is to encourage the carefully chosen shrubs to spread and cover it.  Meantime we would have unsightly bare areas of rocky soil and clay.   One answer nowadays is to let nature decide what should grow there.  This has been remarkably successful this year as what might have been deemed to be weeds have flourished and allowed to flower - attracting bees and butterflies galore.  Roses too have appreciated company. 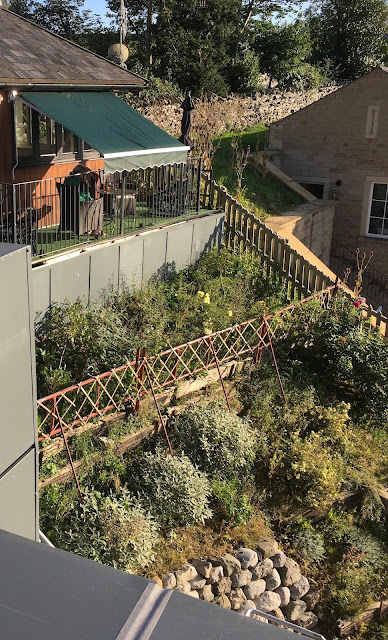 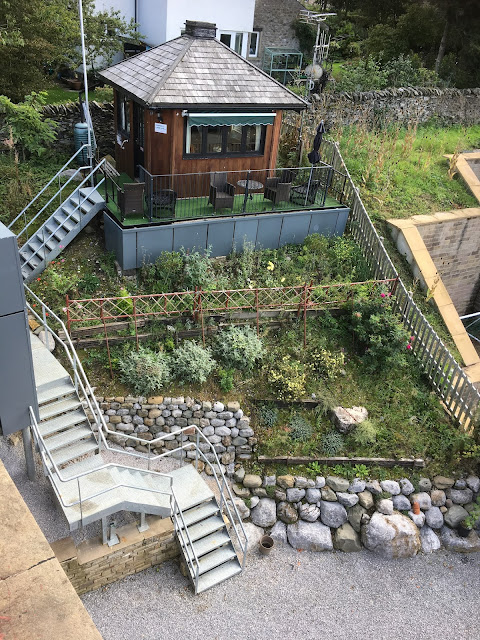 Not at all bad actually.  Because of the slope, you cannot get very close to the planting so what matters is the overall effect.  You can see the roll-up sun shade over the terrace in the top picture and retracted in the lower one.  An exceedingly good buy which shades from the sun and protects from any rain, much extending the usefulness of the terrace.

The fence that runs along the middle of the banking is made of 3 x 8foot long scaffolding tower panels, formerly parts of Gordon the Gondola, camouflaged by trellis.  For the history of Gordon the Gondola do a search for Gordon using the line below the Blog's title picture.

The slope has gone from wilderness / problem area to most attractive and useful part of the gardens, full of interest and varying textures.

Posted by Settle Station Water Tower at 14:51 No comments:

A prominent feature in front of the water tower is our water crane.  I had painted it soon after it was installed and I confess I did it in something of a rush.   It looked OK for a while but has got into quite a state, as can be seen in the title picture to this Blog.  Members of the Last of the Summer Wine gang of volunteers at the signal box had most expertly repainted the identical crane alongside the box which made ours all the more shabby in contrast.

My scaffolding-climbing days are numbered or over so I was reconciled to just living with it. Then, lo and behold, I was told that the Last of etc ganged had decided to paint ours too! 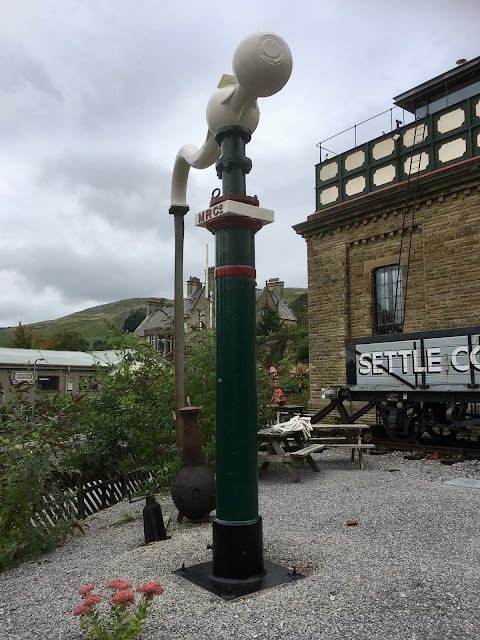 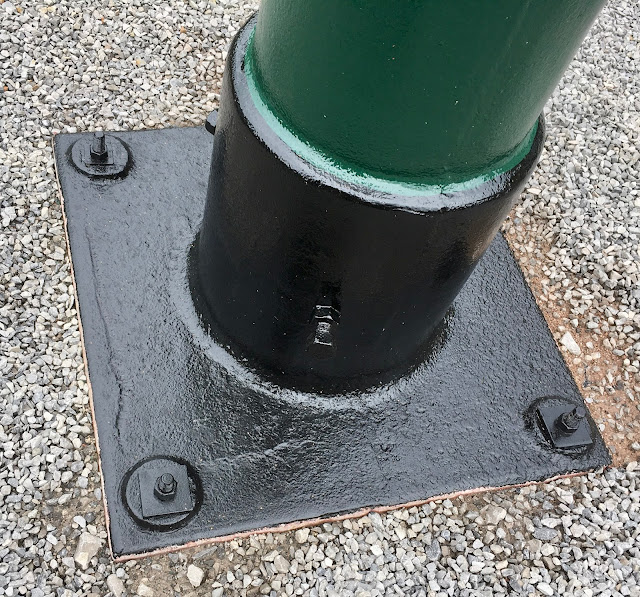 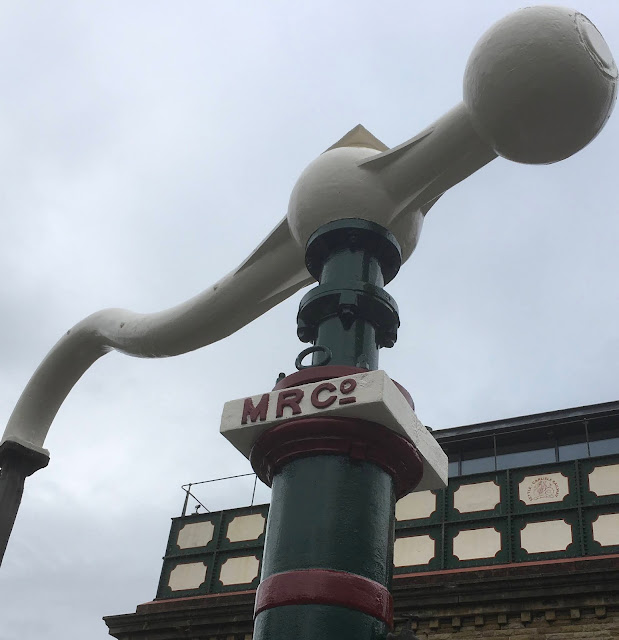 Posted by Settle Station Water Tower at 16:29 No comments:

We are immensely proud of our wonderful nephew David Kay .  Yesterday he entered the Guinness Book of Records for the longest Space-Hopper bounce - fourteen miles from Rossall to St Anne's pier to raise funds for the local hospice.  It was invigilated by Guinness scrutineers and received well deserved TV coverage too.  At the end David was 'knackered' (his word) and never wanted to see a Space Hopper again in all his born days.  Several burst beneath him, pitching him backward with ignominy.  He started at 8am and finished at 1am next day.  In practising he had only completed one mile.  An amazing feat of endurance and dedication to a cause.

Well done David - you DID IT!

Typical of the shy little cousin with whom Lorna grew up, David has blossomed into a magnificent adult of whom any family can be proud.

Posted by Settle Station Water Tower at 20:37 No comments: