Yesterday was one of those memorable days when you undergo a new and unexpected experience.   I had realised that if my 'new' car transporter trailer was to work safely it would need an extra axle.   Easier said than done.

I searched E-Bay and struck gold with a seller in nearby Lancashire who had loads of them.   He is called Ben and he dismantles caravans.   Having just dismantled one myself he has my greatest admiration.   I agreed to take my trailer to him yesterday so that he could advise and hopefully supply the extra axle.

En route my GPS navigation system failed and I had no road map of deepest Lancashire so I had to rely on memory and local knowledge of others.   I stopped at a filling station and uttered one of those lines in life which on reflection you never dreamed would pass your lips.

"Am I on the right road for Oswaldtwistle?"

I eventually found A&A Caravans scrapyard in Church - a suburb of the metropolis of Oswaldtwistle.

Alongside the Leeds and Liverpool Canal Ben's yard did not disappoint.   Surrounded by Berlin Wall defences was caravan breakers' heaven.   It was a revelation.   Corporate headquarters was a caravan of course in which sat three characters straight out of a sitcom.   Conversation stopped as I approached.   "Is Ben one of you?" I asked.

"Depends if you are after money" replied an elderly gent wearing a straw hat.   "If you are then that's Ben.   If you're not, it's me".

There followed two hours of entertainment as well as customer service of the highest order.   Conversation ranged widely.   It turned out the elderly gentleman and I had something in common - we both owned a brick in Guildford's cathedral.   How many other people in Oswaldtwistle can claim that?

Here is a small selection of the hundreds of axles from which to choose.   Just one would suit my needs and it had to be extracted by a mighty crane.   My former profession emerged during conversation upon which a price of £500,000 for an axle was proposed by Ben, dropping to £70 after a full analysis of the scrap metal trade and its non-existent relevance to crime.   Did you know that you needed to demolish 50 caravans to get one tonne of aluminium?   You do now. 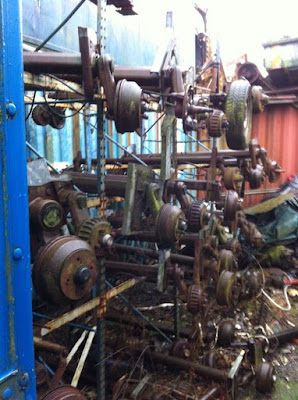 Anyway, after two hours of Ben's undivided attention, graft and advice I was on my way with my 'new' axle securely strapped to my trailer by Ben who threw in two wheels, tyres and wheel nuts gratis.

100 yards into the return journey we crossed the L&L Canal on one of those swing bridges in brilliant sunshine so I parked up, had a Sushi lunch seated on a canal-side bench, at peace with the world.

Possibly the most pleasant and entertaining shopping experience I have ever had.

Thank you Ben.   They should make a TV documentary about you, your yard, your colleagues and your (keep you hands in your pockets) guard dog.   We are talking Fred Dibnah on steroids territory here.

Posted by Settle Station Water Tower at 08:48 No comments:

After much heaving, straining, lifting and complaining the caravan body is completely gone and its chassis is revealed:

The sticky-out bits are the corner jacks.  They all work, as do the brakes.   The galvanised chassis is in splendid order and just what is needed to form the basis of a car transporter / large general purpose trailer. 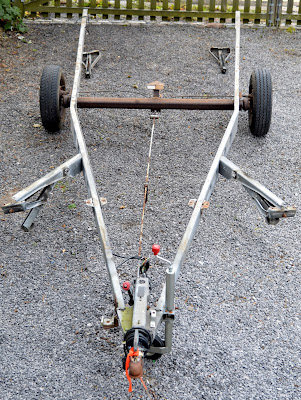 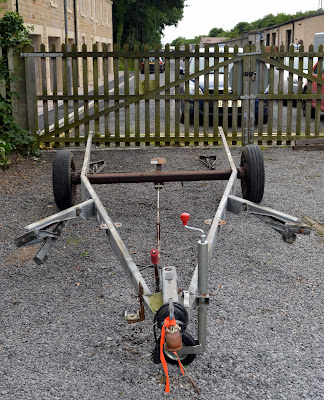 And the area on which the caravan was dismantled has been thoroughly cleared so I am back in good books.     I think. 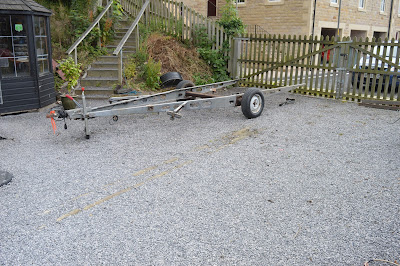 Posted by Settle Station Water Tower at 14:16 No comments:

Both our grandsons - James (below) and Ben have had a superb start in academic life as pupils at Gerrards Cross Church of England School.   The school is the most caring and conscientious that anybody could dream for.  Furthermore it is located right at the bottom of Daughter Lorna's garden so it is almost a home from home.

Ben's form teacher has been Mrs Park - a wonderful lady who is moving on to be a school head and who I have had the privilege of meeting.   Here is Ben with Mrs Park - and a lovely bunch of flowers. 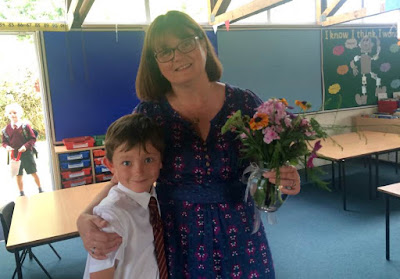 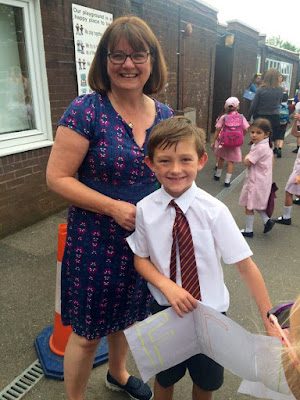 The Gerrards Cross Church of England School provides an outstanding quality of education for its pupils. The consistently high quality of its provision enables pupils to achieve outstandingly well. At the same time, they enjoy school life very much.
Posted by Settle Station Water Tower at 13:58 No comments:

We are Very Proud Grandparents

Grandson James is leaving primary school and, having passed his 11+, starts at big school in September.   Gerrards Cross is in the catchment area of several very good state secondary schools the very best of which is Dr Challoners Grammar School in Amersham.   Dr C's is always near the top of the UK's best schools judged on A level results.   Indeed in 1915 it was number 1!!

Today was an introductory day at Dr C's for the September intake.   Here is clever-clogs James in his new school uniform: 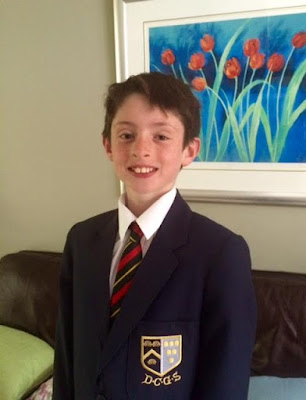 and on his last day at first school.  Don't they grow up soooo quickly? 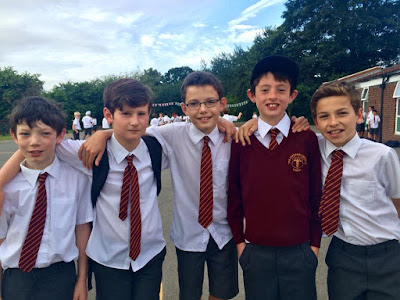 Posted by Settle Station Water Tower at 18:22 No comments:

When I collected the little tractor I had to borrow a large enough trailer to bring it home.   It occurred to me that if I had a car transporter trailer I could cart the tractor about and, if big enough take the model T Ford further afield.   One approach to this is to get an old caravan and to take it apart to use its chassis as the basis for the trailer. 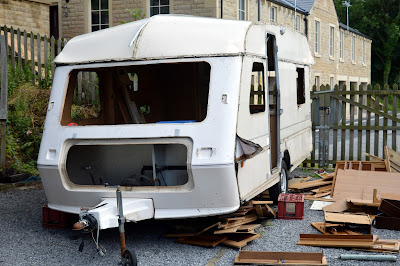 I found this one time (1991) luxury caravan on E-Bay for just £30!   It had been stripped of its windows, lights and other re-saleable components but the chassis was fine.   I towed it home from Clitheroe and then told Pat. . . . . .

After a 'meaningful conversation' I agreed to dismantle it this week and so far it is going well: 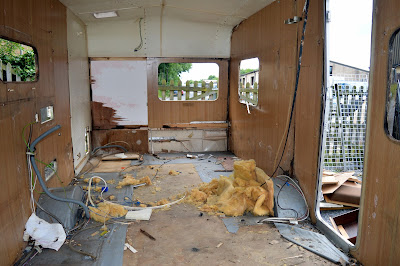 The interior was stripped of everything on day 2 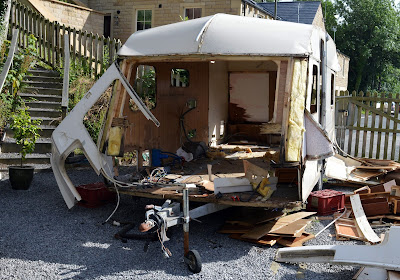 and by the end of day 3 the front wall was gone.   As a bonus I have found £2 in coins in various nooks and crannies so that brings the purchase cost down to £28!

And by the end of day 4 we are beginning to see the floor and its all important chassis.   I guess there is no turning round now: 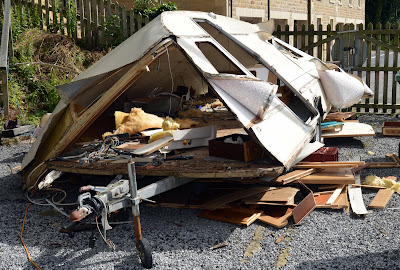 The components are being sorted into wood, metal and plastic for re-cycling.
By the end of day 5 we are getting down to the chassis: 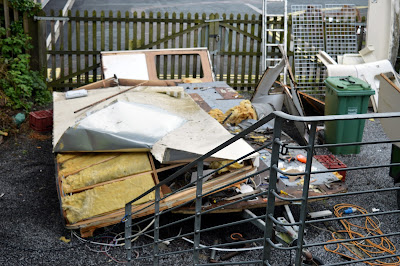 Only the flimsy roof now remains so the flatbed trailer should soon appear - today hopefully.

Having seen the extent of rotten wood in this caravan I am convinced they rot from the inside, probably due to winter condensation and lack of winter ventilation.   The actual wooden framework which rots is minimal - most of the strength comes from the laminated and glued sides.   It would cost pence to rot-proof the wood before construction but I guess the caravan makers actually want them to rot and need replacement.   Doh, there's me being cynical again.

Just a word about the method with this.   I have seen YouTube videos of people taking sledge hammers or JCBs to caravans and ending up with an awful mess of mixed rubbish.

I went to the local tip and had a meaningful conversation about it.   I said I would separate out the recyclables and bring them along separately.   That meant metal (1 1/2 trailer loads) and wood (three loads).

The rest was plastic and fibreglass plus foam insulation (two trailer loads).   That way I had no difficulty getting rid of an entire caravan body.

I identified temporary sites for the three categories of waste as the dismantling took place.

I removed the inside first - mainly wood - after which the shell was quite wobbly.   Cupboards hold caravans together!   I removed the end walls then side walls, letting the very light roof cave in harmlessly at its own pace. The roof was easily taken apart when it was on the trailer bed.

I retained quite a lot of useful fixings - stainless steel screws especially.   And the chassis of course.

The walkways around the roof room are proving to be near ideal patio garden climates.   Here is the western walkway showing the back of the Settle letters with flowerpot man Boris perched on the S.

The container plants below are coming on nicely. 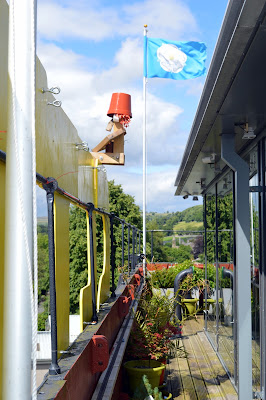 click to make the plants grow even more
Posted by Settle Station Water Tower at 19:54 No comments: