Visitors from Round the Globe

We have always welcomed visitors to the Water Tower and have allowed them to wander round the outside of the tower at least.   In so doing we have met some amazing people and it has been a delight to share with them a glimpse of this wonderful building.

Obvious interest in the tower started from the moment it first appeared on TV.   We rather expected this to ease off with the passage of time but far from it.   The TV programmes have been repeated often in the UK but also and increasingly, worldwide.

With no encouragement on our part we find ourselves a tourist destination.  We are even on Trip Advisor (Five Stars too)!

We are lucky enough to live here and it is comforting to know that other people share our enjoyment but should we draw a line somewhere and pull up the drawbridge?   Difficult when people have traveled from far and wide to see the place.

During August we thought we would try a bit more of an open gate policy (with the agreement of our insurers, NFU Mutual).   We put up a couple of low key notices and marked a route with arrows: 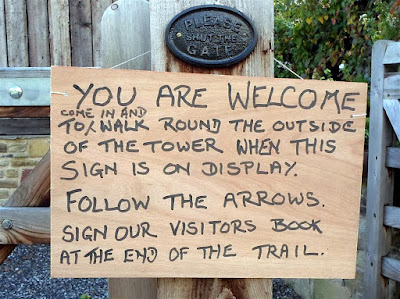 We only display them when we are round and about the tower so retain some control and answer questions. 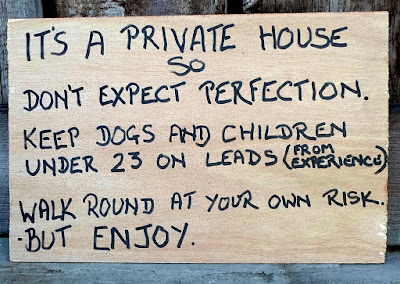 The results have been astounding.   It's hardly a stately home but I guess that some stately homes would be glad of so many visitors.   By no means everybody signs the visitors book so we do not know just how many people have wandered round but it will be in the hundreds.

Here, simply in order of appearance in the visitors book are some of the foreign addresses in August 2015 alone:

Not sure what to make of all this but such worldwide interest must at least be good news for the local economy?

Each afternoon our rural idyll is shattered by the log train, seen here crossing the Ribblehead Viaduct yesterday.  The viaduct is a quarter of a mile long.   So too is the train.

Picture by Julie Johnson was Steele
Posted by Settle Station Water Tower at 08:04 No comments:

Portrait of a Coal Truck

Had a visit last Sunday from a jolly group of photographers among which was Sally Mastronardi who took this splendid portrait of our coal truck which, having had some magic worked on it, looks suitably grubby, black-and-white and ready for action. 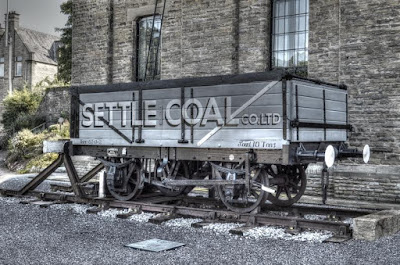 I keep asking visitors if they have a coal truck in their garden and so far nobody has admitted to having one.   9 out of ten though wish they had!
Posted by Settle Station Water Tower at 09:43 No comments:

What a Ringside Seat This Is

The house is the Stationmaster's House, now the home of neighbours Les and Val Barlow.

The camera freezes the action but the trains will be doing around 60mph on this downhill stretch.   Not everybody likes trains  but we do.   How fortunate are we to have sights like this on our doorstep?
Posted by Settle Station Water Tower at 08:00 No comments:

Glorious day today with high pressure over the UK.   The sun-deck (see earlier posts) has been a real success - mainly in the evenings.   Today though I gave it a try in the morning to read the Sunday paper in the sunshine.   Though September the sun was simply too hot so I put up a parasol.   All was well for a while, then the wind got up a bit. 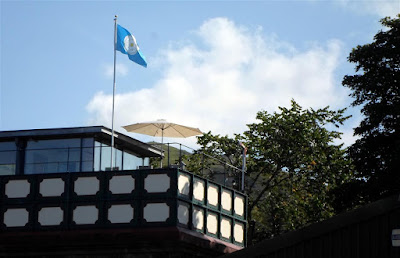 Here is the parasol looking really rather swish, but look at that flag.   What had been a flat calm was a gentle breeze and I had failed to take account of the air flow over the tower.   Even a gentle breeze goes upwards when it hits the tower . . . . and the parasol took off, landing gently and without damage at the back of the tower.   Station supervisor Paul Brown witnessed the spectacle and shouted across, "Eh up Mark, tha's lost thi brolly" 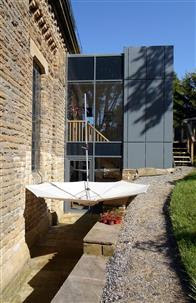