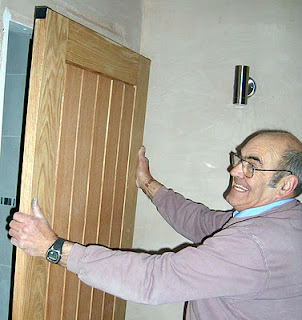 Sad news this week with the death of joiner Dave Richardson.   Dave was said to be one of the best joiners in the Dales and we were lucky to have him do the joinery at the water tower.

Dave was so proud to be working on the tower and was always there to advise and encourage me with the woodwork I did myself - most notably the navvy hut.   Had it not been for Dave's advice the hut could have blown away by now for lack of adequate roof bracings.   He was gently insistent that I included them.

I was daunted by the enormity of the work involved in rebuilding the hut but knowing Dave was nearby gave comfort.   His habit was to work alone most of the time.   I asked him about this.   He replied "There's hardly owt tha can't do by thisen if tha works it out fust".   I took that to heart.

Here is the magnificent oak staircase that Dave built for the annex.   It may have been his last staircase - and I think that was how he approached it.   His signature is carved in to the top step. 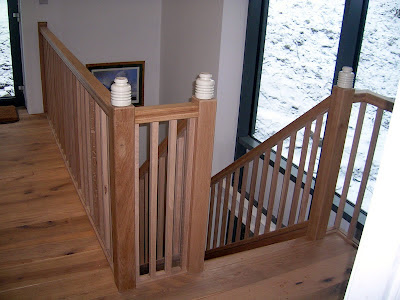 Posted by Settle Station Water Tower at 09:49 No comments:

Views on a Late Spring Day 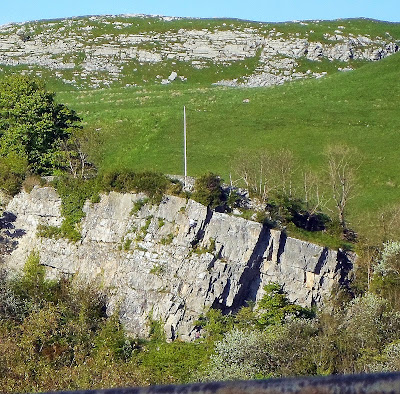 The sun has shone from dawn until dusk today and that is remarkable enough to record for posterity.   The first picture shows Castleburgh Crag - Settle's dramatic backdrop - with Attermire Scar behind it.  This is among the best limestone scenery in the World and we are immensely privileged to be able to have such a view of it from the tower.
The picture was taken about 7pm.   If you look closely you can just see a rock climber nearing the top of the climb up Castleburgh - just below the base of the flagpole. 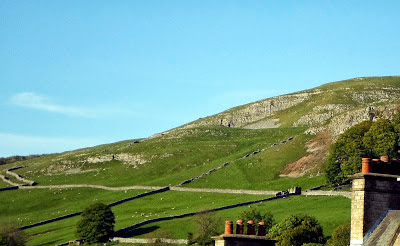 A bit further to the north is the limestone scenery between Settle and Langcliffe with Settle's roof-tops below. 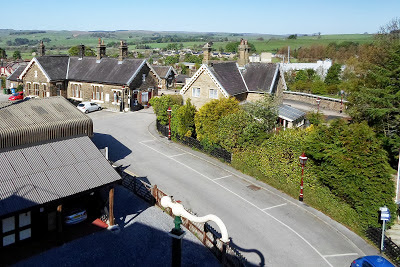 About twelve hours previously, around 7am this is the view of Settle Station with plenty of empty spaces in the car park.   Later in the day - a bank holiday Saturday - the place was incredibly busy.   The trains were so crowded they stopped selling tickets at Settle.   One coach party simply could not get onto their booked train.   What is going wrong with Britain's railways?   The passengers are there but the capacity to cope with them is not - at least on the Settle-Carlisle line. 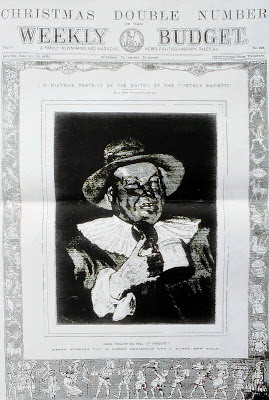 Tremendous thanks to Edward Album who has tracked down a copy of the Christmas 1878 issue of The Weekly Budget, fragments of which were found pasted to the navvy hut wall.  The British Library's newspaper archive at Colindale in London were able to supply a copy.   Above is the title page, with the all important date of publication.   The editor filled the front page with "A Christmas Portrait of the Editor of the Weekly Budget - by an artist who has never seen him".   Hardly a rib tickler by today's standards.

I have chosen this frame as it is recognisable from the fragments on our board.  The story, such as it is, is entitled "He Would Be A Farmer" and it tells the tale of the travails of an itinerant and his family who are seeking to make it as farmers.   There are few or no jokes as such but the illustrations seem be there to assist with reading the captions.

The font throughout is incredibly small and it would have been necessary to use a magnifying glass to read the paper.   Skimming through the paper there does not seem to be anything of particular note that would have merited the pages being pasted to the hut wall but I shall read it in detail and report further.   Edward Album did take the opportunity of glancing at some issues either side of the Christmas double issue of 1878 in the hope that there may be reference to the then new Settle-Carlisle railway but without result.   What he did find were lots of references to war in Afghanistan . . . . . 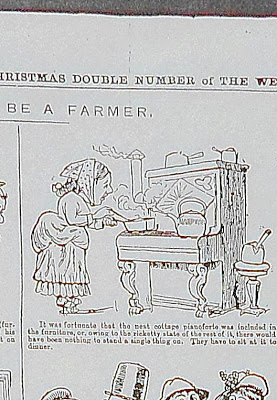 Posted by Settle Station Water Tower at 09:22 No comments: 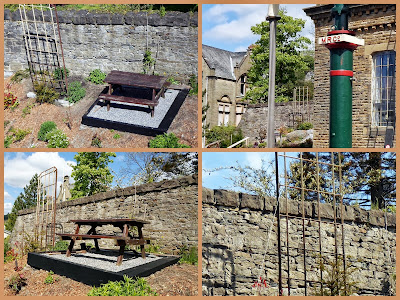 click collage to enlarge
One of our biggest regrets in this project was the need to remove some important elaments of the tower's original fabric - five tank base plates and a 10 feet by 4 feet cast iron window frame.  Had we been allowed to put our stairway and lift shaft outside the tower we could have avoided these costly and destructive removals.   Despite all the planning conditions imposed on us we were not required to keep these items on site.  We could have weighed them in as scrap.   To be fair, the perceived need to avoid overlooking a neighbouring garden over-rode the conservation elements in this instance.

The tank base plates have been used as flooring in the driveway to the garage.   That only left the 10 x 4 window frame .   We had stored it out of harm's way at the top of the knoll at the Station Road end of the site.   What to do with the knoll generally was a problem.   It is a prominent feature in itself and enjoys full sun from noon until sunset.

The collage shows our solution - a small plateau dressed with limestone chippings provides a levelbase for a garden bench type table.   Alongside and slightly lower the window frame has been placed vertically.   Securely but unobtrusively guyed by four 4mm stainless steel ropes and barrel bolts it now forms a vertical lattice up which will grow clematis.   A huge, heavy but pleasing climbing frame.

Posted by Settle Station Water Tower at 16:10 No comments:

Today's the Day the Teddy Bears Have their Pics Clicked 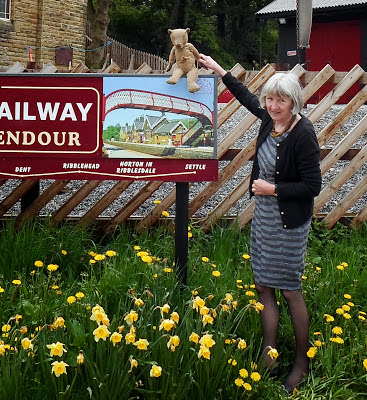 We get a constant stream of people taking photographs of the tower - and are delighted that so many are interested enough to do so.   Just when you think you have seen it all a surprise comes along.

As the crowds getting off today's 1630 from Carlisle had dispersed I was pottering in the garage when I caught a glimpse of a lady of mature years looking furtively up and down the station drive.   Now I didn't get my police pension without doing the odd bit of surveillance- and knowing when somebody is being furtive.   I took cover.   Satisfied, wrongly, that nobody was watching she produced from behind her back a rather scruffy Teddy bear and placed him carefully on top of the 'Welcome to the Settle-Carlisle Railway' sign.   Still checking for witnesses she went to the far side of the station drive and took a photograph of the tower, the sign and the Teddy.

Regretting the lack of a camera myself I broke cover and confronted her.  Slightly red faced she explained that the bear was not hers but belonged to her family.   It went everywhere with them and was photographed wherever they went.   They had been on the railway today and this was proof.   What a charming idea.   We had a good laugh about it and off she, and Teddy, went.

The picture shows Pat recreating the scene with her lifelong friend 'Teddy' - a bear who lost his fur, his eyes and his squeak during Pat's creative phase.   Whenever I see her with a pair of scissors I instinctively protect my squeak
Posted by Settle Station Water Tower at 17:38 No comments: 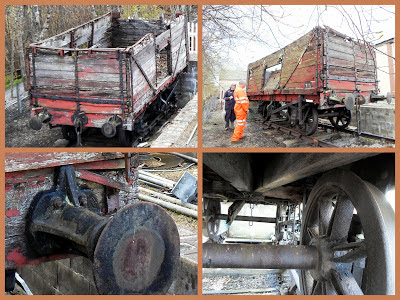 click image to enlarge
A collage of the Aviemore wagon.   This old girl has survived for maybe 100 years and deserves to be rescued before the Highland winters claim her.   The timber frame is in remarkably good order and just look at those lovely old wheels.

Posted by Settle Station Water Tower at 18:23 No comments:

"Four and Twenty Virgins Came Down From Inverness"

We have spent the last couple of days in Inverness.   Why does THAT song come into my head whenever I think of Inverness?

Anyway, we went to the Speyside Railway at Aviemore to see 'our' wagon and decide if we really wanted to transport it all the way to Settle to be restored and to sit on our bit of track.   Speyside's Keith Holyland met us and showed us the wagon - and it did not disappoint.   It will be a restoration project for sure but all the bits are there and the wooden frame is not at all bad.   We have decided to 'go for it'.

It turns out to have been made by Charles Roberts & Co Ltd of Wakefield so in some sense it would be coming home to Yorkshire at least.   Roberts's made railway wagons from 1899.   We may never know the age of this one but it is old.   By way of motivation, here is a link to a Charles Roberts wagon that has been restored:

All we have to do now is arrange cranes and transport.   Watch this space.

Posted by Settle Station Water Tower at 17:44 No comments:

Today we were visited by a delightful trio of new Zealanders.   They had seen our programme on TV in New Zealand and were determined to see it for themselves.   They had been staying in Windermere and were en route to Chester, diverting via Settle to see the water tower.

What a delight and privilege it is to give enjoyment to people on the other side of the world.

I could not resist the obvious question about how they had gone on with the earthquake.  Their home had been damaged to the extent of a £300,000 insurance claim but they had survived and were grateful for that.   They said that the oldest buildings in Christchurch, notably the cathedral, had suffered the most.   They therefore appreciated all the more our efforts at conserving our little bit of built heritage.
Posted by Settle Station Water Tower at 20:38 No comments:

After a period of about a month without much rain our 1,000 gallon rainwater harvesting tank was getting low.

It started raining yesterday about 1pm and it rained on and off until 3am this morning, recorded accurately by our weather station.  In that time just 13.5mm  of rain fell but the water level in the rainwater harvesting tank rose from 28% to 52%.

All of the rain that falls on the tower roof, the annex roof and now on the navvy hut roof goes into the harvesting tank.   That is  very large catchment area - and the system works!
Posted by Settle Station Water Tower at 08:26 No comments:

We Have ARRIVED in Settle

The picture, taken by John Diggles shows our good-selves being introduced by the vicar of Settle, Rev Hilary Young to a packed congregation at Settle church where we performed the official opening of the Settle Flower Festival.   We don't think we have ever been asked to open anything before, although I did dig the first sod of the Bingley Relief Road.

We both reckon we have 'arrived' in Settle now - but recognise that our temporary TV fame must be kept in perspective.   Settle's 'proper' celebrities are Alan Bennett and Mike Harding.   We suspect they were otherwise engaged.

Posted by Settle Station Water Tower at 19:30 No comments: