Phew What a Bank Holiday Scorcher

May this year has been the third wettest on UK record.  April had been a near total drought.  But now it is Spring Bank-Holiday and COVID restrictions are easing so the family have been here today and we have enjoyed a delightful party in the sunshine in our one-time coal yard garden.   Among the family was ace photographer David Kay who took this remarkable picture to illustrate the original tower and the new extension with its sinuous staircase. 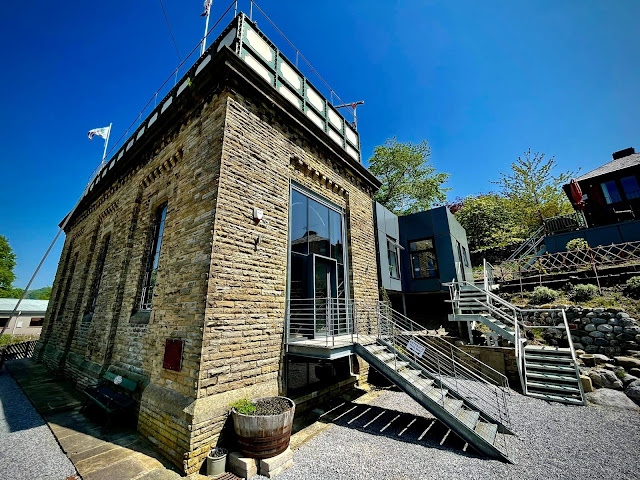 And a couple of other good pictures below,   First is by Anthony Ward and shows Southern Region locomotive Braunton heading south through Dent station: 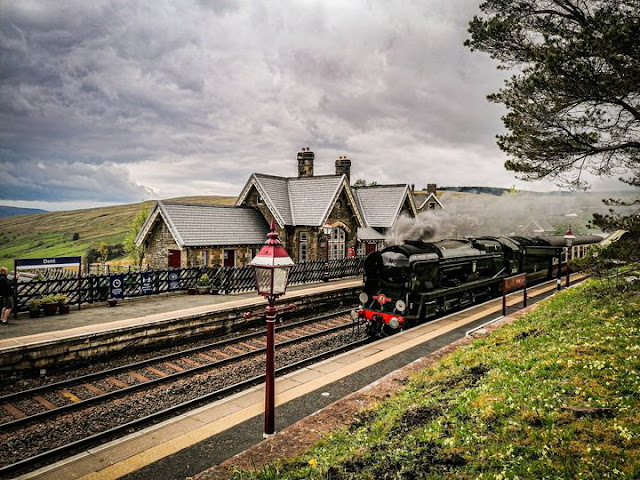 And this one is from The Folly's website and shows out old back garden, now serving as a tea garden annex to the very posh cafe on the ground floor.

Posted by Settle Station Water Tower at 18:47 No comments:

Castlebergh is the massive overhanging rock face which towers above Settle to the east.  It is a popular place for rock climbing with no less than 24 named and numbered climbs on it, most difficult, ranging through to severe.   These were climbed and recorded in 2009 by former police colleague Dave Musgrove and an experienced team.

One of them is a horizontal traverse running south to north, appropriately named The Settle-Carlisle Line.

Yesterday, Sunday 23rd May around 1pm tragedy struck when a climber fell to his death down the entire drop.  I was aware that something was wrong when I heard the distinctive two-tone sirens of the Clapham based Cave and Mountain Rescue Land Rovers heading our way, then silence.  Shortly afterwards came an air ambulance, followed by another.

Here is the Craven Herald's Report 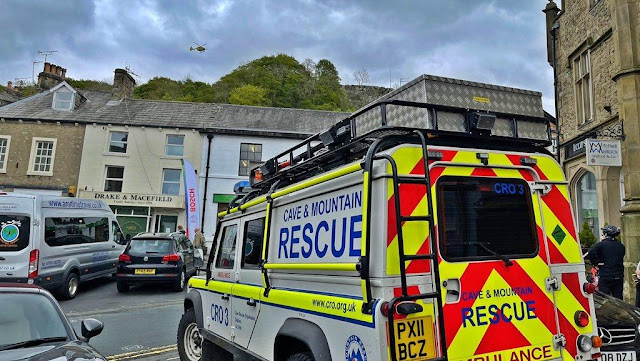 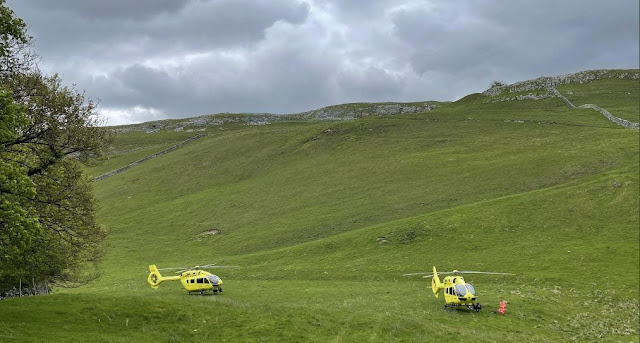 Though remote, Settle is very fortunate to have its amazing Cave Rescue Organisation - all volunteers and the Yorkshire Air Ambulances.  Sadly, summer weekends in the Dales keep both busy.

It has been a dramatic week weather-wise as this picture of Ribblesdale shows. 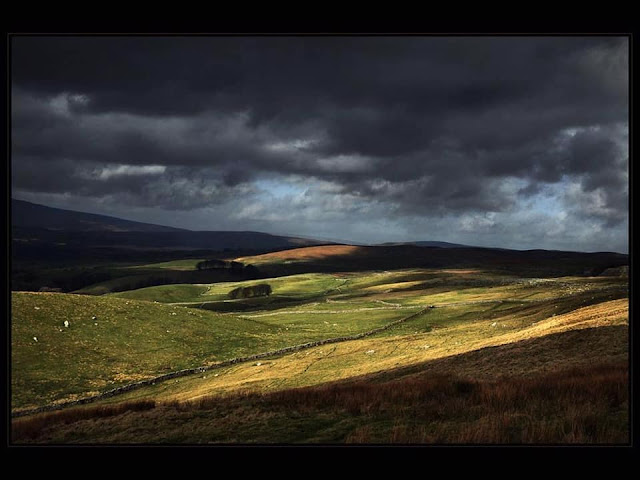 Posted by Settle Station Water Tower at 17:11 No comments:

We had our very first steam train over the S&C yesterday, The Pendle Dalesman in absolutely perfect weather,   Loads of photographs and videos online but these are the best for me.  First is going north and working hard at Langcliffe.  Second is the Pendle Dalesman hauled by the magnificent British India Line (BIL to its friends) returning south at 1736 in glorious sunshine. Photograph Anthony Ward. 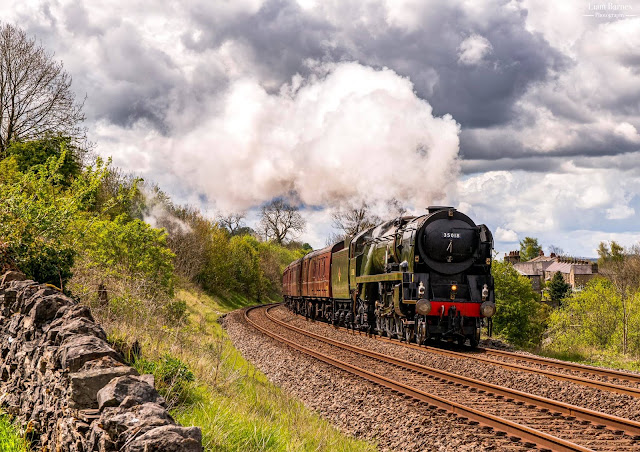 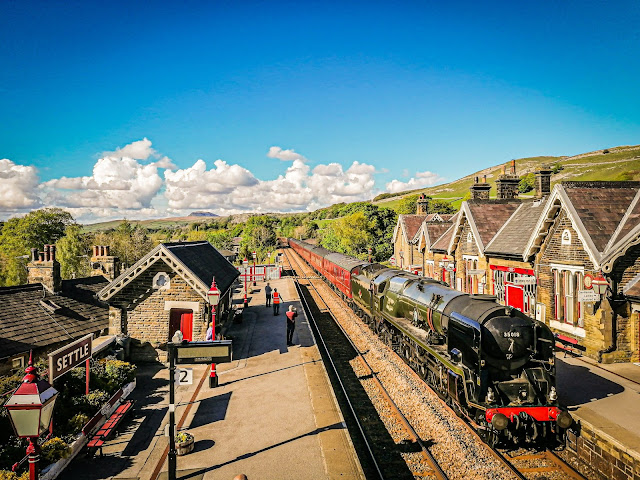 Posted by Settle Station Water Tower at 16:06 No comments:

We try our best to keep things tidy around the water tower - especially now that the building work is over and the visitors are returning.  It was a delight therefor to find this dangling from one of the shrubs outside our station driveway entrance: 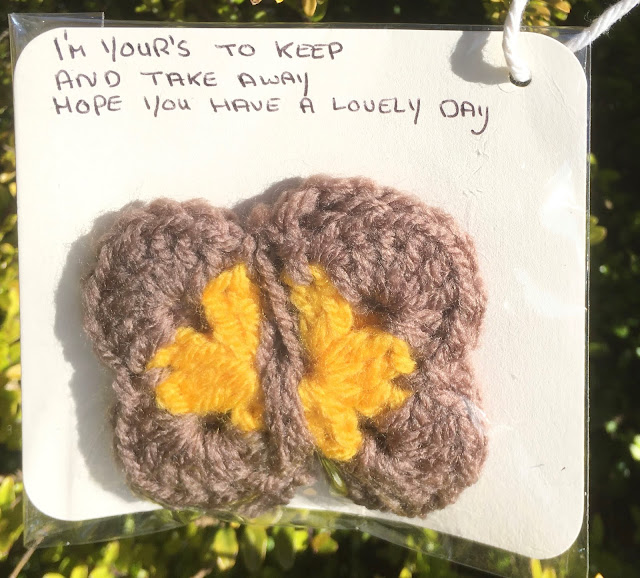 Below is an amazing picture by Mike Farrington of Pen y Ghent with one of our recent storms rolling in and obliterating its top.  Not the sort of weather to be up there.

Posted by Settle Station Water Tower at 16:07 No comments:

Yesterday late afternoon, Sunday 16th, the sky to the east darkened to the extent that I took a photograph of it: 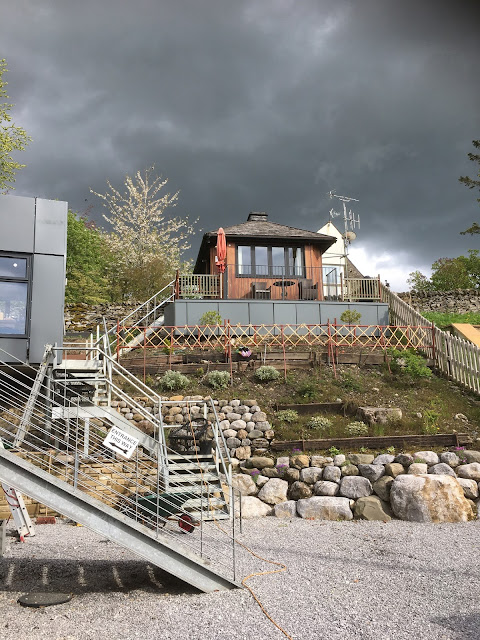 Nonetheless the sitting-out balcony in front of Terminal 3 looked inviting so I went up there to do the crossword in the sunshine.  There was no wind whatever.   Hardly had I sat down in the sunshine a couple of those enormous raindrops fell so I retired into the building, there to stay marooned for the next couple of hours!   The Heavens opened and a record breaking very local downpour fell.   Hail, rain, thunder, the lot.
Marooned?  Well yes.  I was wearing carpet slippers and the staircase access was soon covered in hail/ice.  Given my experience with stairs I decided to sit it out.  This shows the exceptional extent of hail settlement: 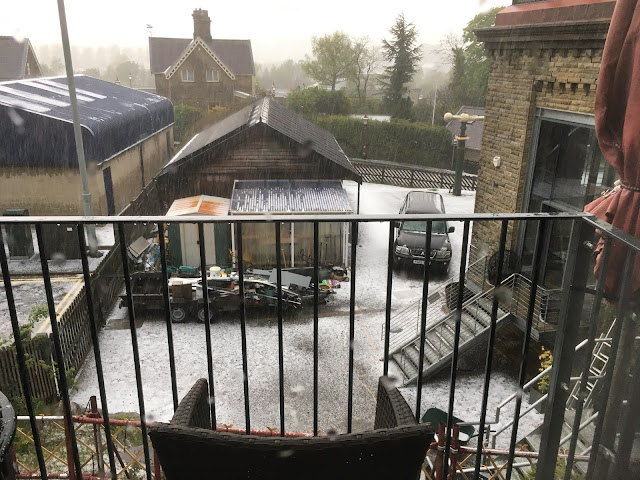 The armchair in front of the railings was where I was sitting in the sunshine before the storm came.
Turned out to be a record-breaking storm as this 'records' read-out from our weather station shows:

Columns, from the left are This month, This year and Since September 2011.   7.6 mm of rain in one minute!!
No flooding in the immediate vicinity but elsewhere in Settle there were indeed floods.   This was Settle by-pass at Gildersleets: 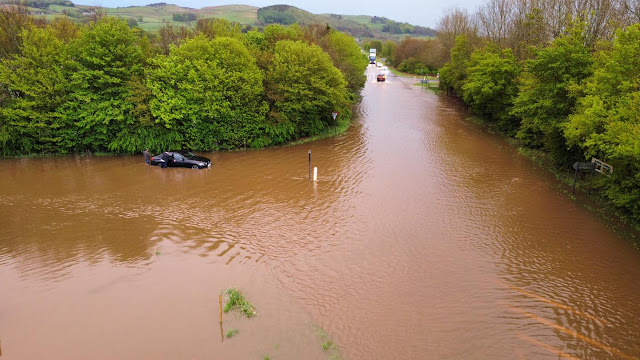 Posted by Settle Station Water Tower at 09:32 No comments:

Facebook and Twitter have been awash with pictures of The Blue Pullman crossing the roof of England each day this week.  The S&C grapevine has been busy and the number of photographers seems to be increasing daily. 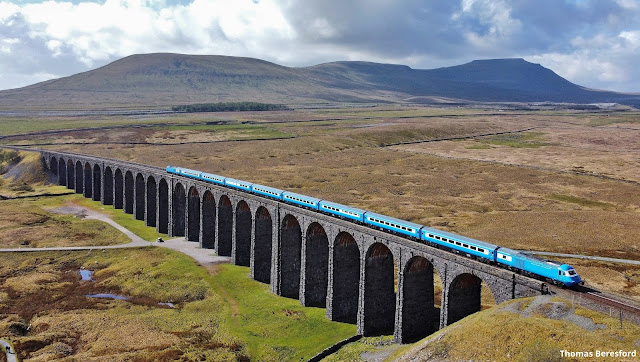 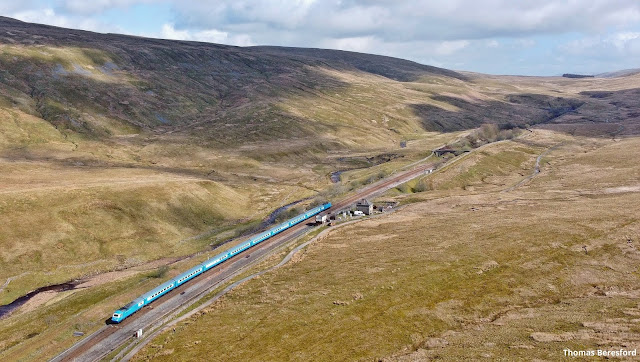 Do click to enlarge if they will.  The images were in high resolution when I put them on the Blog

Posted by Settle Station Water Tower at 17:48 No comments:

That was Some Bang = and Some Train

First for a long time but we had a couple of proper thunder storms this afternoon.  This remarkable picture was taken in Upper Settle, looking our way.  The rain was Biblical and I went round the whole place looking for leaks - there were none.

Also today we had a visit from the magnificent Blue Pullman train.  Based at Crewe it was here doing high speed train driver training.   This is a precursor for the Staycation Express trains which will run over the S&C from mid June.  Also, there is a possibility that these old HSTs will be called back into service on the East Coast and Great Western main lines as the new super-dooper replacement trains have been found to have fatigue cracks in safety critical areas. 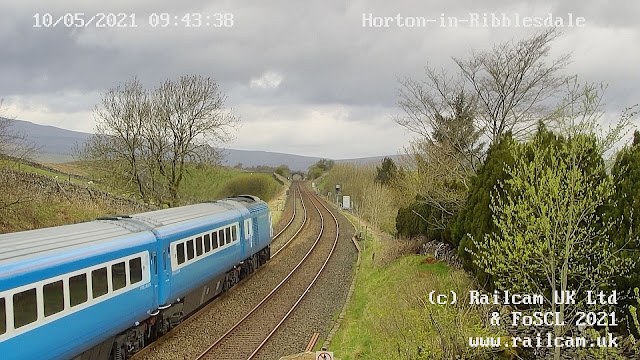 Here's the Blue Pullman heading north at Horton in Ribblesdale.  An eight carriage HST on the S&C - at LAST!   I had been in touch by text message with the driver /instructor of this empty train so got a very personal progress report (NOT whilst he was driving!) so was able to get a platform-side view a bit earlier at Hellifield, en route to one on my frequent visits to Airedale hospital.  This time it was for a COVID throat swab (yuck) prior to a 'procedure' there on Thursday.

The blue flyer later came back from Carlisle and stopped at Hellifield so that the crew could have a cuppa at the splendid 24H cafe there: 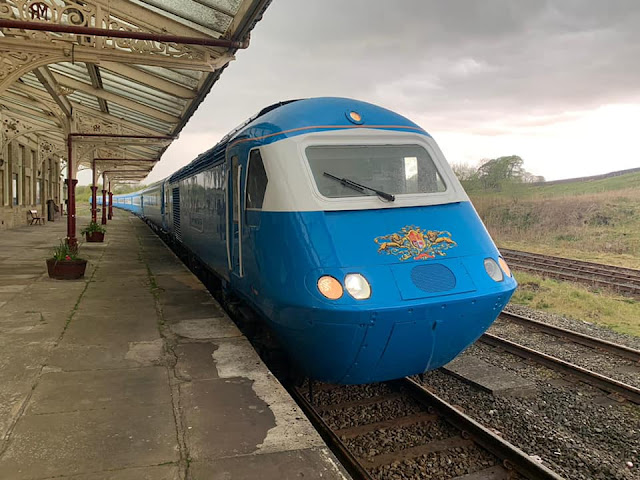 Now, steam trains apart, doesn't that LOOK like a train that means business?  Style on wheels.

Posted by Settle Station Water Tower at 21:22 No comments:

T3 Still Has Its View

When the extension was being designed I had some worries about the impact it would have on the view from the Wendy House on top of the south embankment- now named Terminal 3 or T3.  Most critically, would we lose our distant view of Pen y Ghent?

Yesterday provided the ideal opportunity to photograph the answer.   Here was the snow-capped view of Pen y Ghent from T3's doorway: 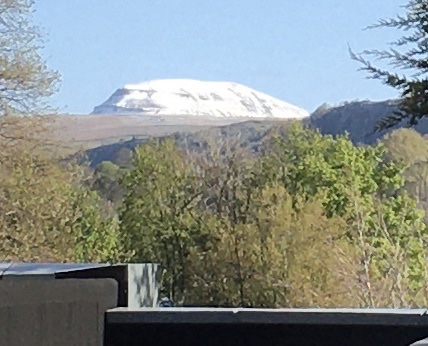 By no means the clearest image but there she still is - large as life and glorious.

That's our view to the north both to the south things are different - we overlook the end of an industrial estate.  But even that is good, and about to get better.  Our immediate industrial neighbours are DCC Concepts who take a good deal of care about their image.  They are about to extend their very neat perimeter gardens to include three of the four boundaries.  The images below are part simulations showing how things are now: 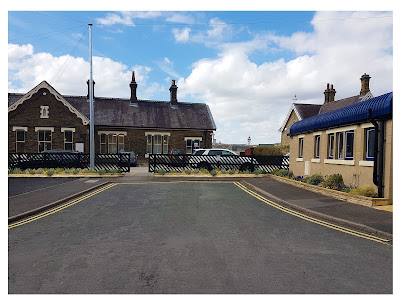 and how they will be soon for their second building, which we overlook across the turn-round area: 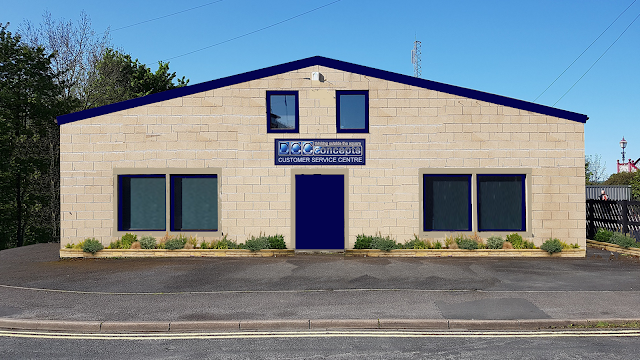 Good, eh?
I'm helping out with liaison with our friends at Network Rail for the railway boundary with the station car park.
As ends of 1980s industrial estates go, this is good and getting better.

Posted by Settle Station Water Tower at 18:53 No comments:

The little black shed on the northern hill has served us well as the site office for the building works and, following a builders-clean this morning from our treasure Nicky has become another retreat, or man cave.

The view southwards used to stretch up to Terminal 3 but of course Terminal 2 is now in the way.

Here is a souvenir from among the surplus drawings nestling in the black shed - an isometric view of Terminal 2 on its stilts: 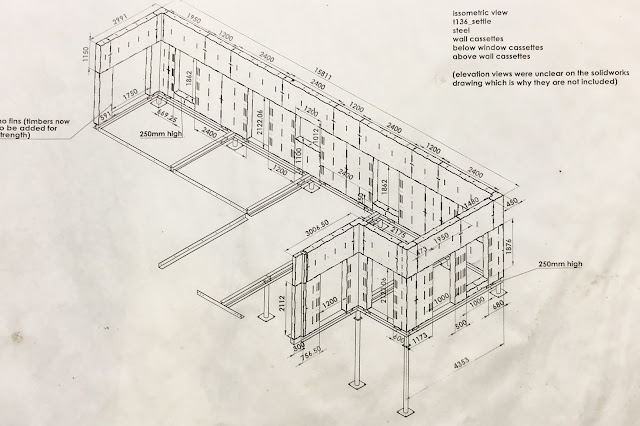 All very trendy, modern and comfortable yet here we are, right in the heart of the glorious Yorkshire Dales: 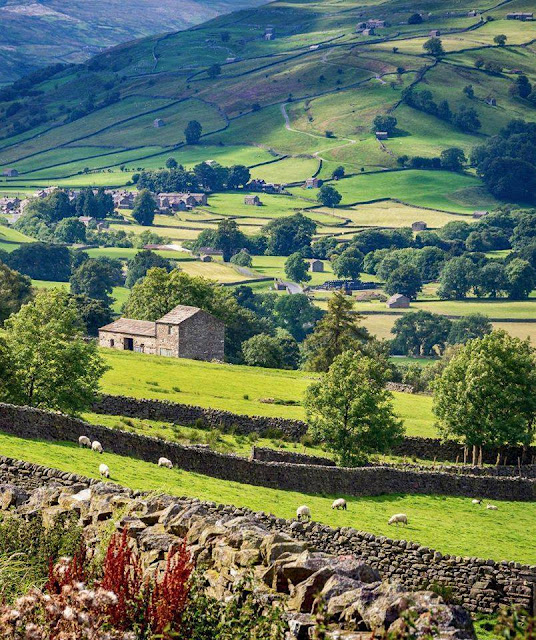 Posted by Settle Station Water Tower at 16:05 No comments:

At last, after an almost dry April (yes, April) meaningful rain is on the way.  The garden, including quite a bit of new planting had become absolutely parched, necessitating a lot of tedious watering. 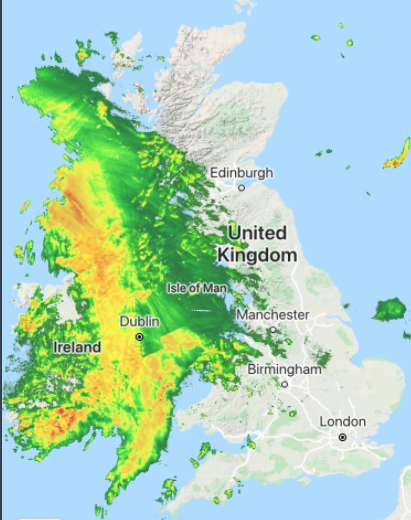 Talking of Uncle Sam, son in law emeritus Alan in Pittsburgh e-mailed on the subject of bats after the last Blog posting.  He was enjoying a twilight sit on the (flat) roof of his palace in Pittsburgh and was watching the bats doing their thing.  There are bats aplenty living in a disused chimney of the building.

Out of the blue (or black) there came a flash of lightning whereupon all the bats swooped down on their chimney and took refuge.  Amazing flying skills he reports.

Job for today - dip* the rainwater harvesting tank and take a reading, then repeat after the deluge.

ADDIT:  I did dip the tank.   Before the storm it was just above half full - that was following an almost rainless April.  After the storm it was full and overflowing into the drainage system.   This provides reassurance that, with the addition of the rain catchment area of the T2 roof, we should have harvested rainwater aplenty for evermore.

Posted by Settle Station Water Tower at 08:52 No comments: