This has just popped up on Facebook's 'Back in Settle' group.  A colour picture of the water tower as a forlorn backdrop to a weed-strew former Settle station goods yard.  Quite amazing that anybody thought it worth pressing the shutter when it cost actual money each time for the film and developing.

What a depressing scene in such a lovely part of the world.  My guess is early 1980s or late 70s.  Steam had finished (1968) and the water tower was useless for its intended purpose.  An amazing survivor therefore.

By the angle of the sun it was mid to late morning.  The flowers on the up platform suggest it was in stationmaster Taylor's time.  Perhaps that is him alone on the platform.

What a difference from today's amazingly restored Settle station and surrounding area which somebody on Facebook or somewhere recently described as like Disneyland. 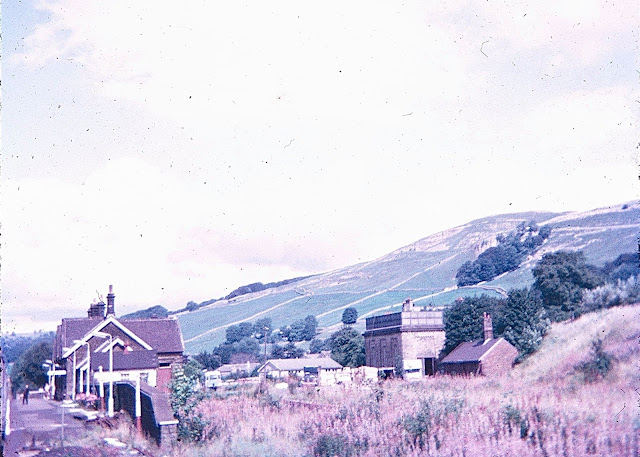 Posted by Settle Station Water Tower at 21:25 No comments:

Ages ago I contacted the Strathspey Railway at Aviemore to see if they had any further details or photographs of our coal wagon.  Out of the blue this came from Strathspey's Ron Black:

In the very early days of our history, 1972, we were gifted a Simplex 4 wheel diesel shunter and four “LMS Coal Wagons” as they were stated to be from Aberdeen Gas Works. The Simplex became the only operational motive power on the line for the next few years. The wagons, although used were, because of their 7 plank size, found not to be terribly useful. Too deep to carry ballast for example as it could only be shovelled out of the discharge doors. I could find no other reference to wagons of this type being acquired by the railway so I’m certain that the one you have must have come from this batch.
At some later point I found reference in our journal to consideration being give to scrapping the less useful and time expired rolling stock but when this policy was put into action I’ve not been able to trace. We had a member, now sadly deceased, who was very interested in PO wagons and he was instrumental in saving, refurbishing and lettering the one survivor. I’m sure he would have been delighted to know and see what a fine job you have made of “his” wagon.
The image shows the wagon, as yet unlettered, in a siding at Aviemore.
I hope the above is of interest and if I should find any more details I’ll be in touch.
And here is the image: 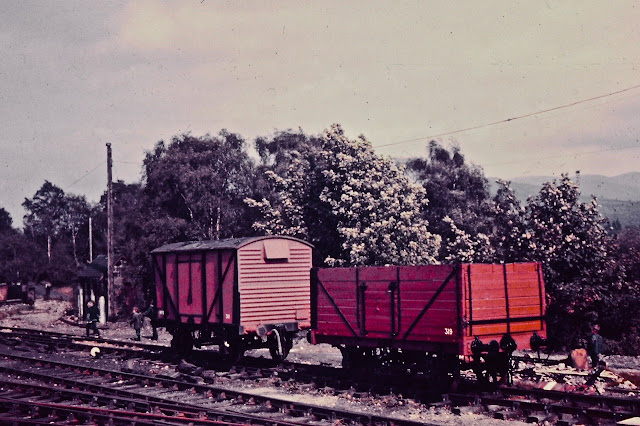 Look at the header picture of this Blog and the details all fit nicely
Posted by Settle Station Water Tower at 14:20 No comments:

This and a series of other photographs have been posted on Facebook by a local drone person, causing quite a stir about privacy.  Anyway, this was last evening: 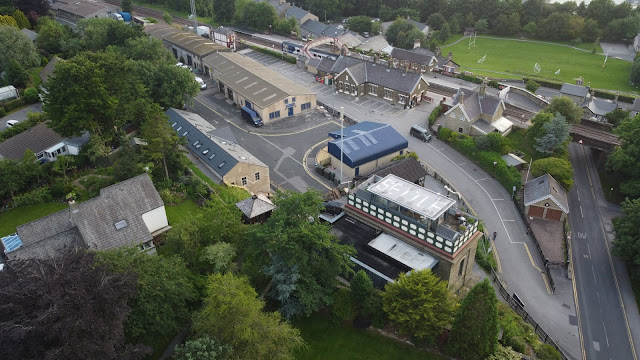 At first glance I wondered if was indeed yesterday as the huge rearwards extension does not show up at all well from the air.  But it's there alright with its black roof, bordered by the light grey tops of its walls.  The picture reveals the extent of the combined extension covering a greater area of ground than does the tower itself.  The earlier extension (Terminal 1!) has a light grey, almost white, roof in the picture.

The Stationside apartments and our cheeky summer house look well.

The current heatwave has put our ventilation and insulation systems to a stern test - and have passed.  The new bits are warm as toast when needed and cool as a cucumber right now.

Posted by Settle Station Water Tower at 14:43 No comments:

Our magnificent 18 years old Mitsubishi Shogun has only done 40,000 miles and does not appear to have done much, if any, off-road work.  It is the proverbial Chelsea Tractor indeed.  It has just had four new tyres and simply does not look its age.  Almost too good to be true.  One problem with elderly Shoguns is rust underneath and I have been keen to have a look-see for myself.

Again, Settle Coal to the rescue for letting me have access to their immense set of concrete ramps up which even HGVs can go.  Last week one hot dry day I plucked up courage and donned a set of overalls to inspect down under and to give it a spray of Lanoguard.

Took about half an hour and pleased to report that there was very little rust indeed.  Sadly I did not take a picture of the car in the sky but I was able to record what minor areas of rust that were to be seen.

T'Tin'Ut?  Well, we are getting rid of a lot of rubbish and generally tidying the place up.  T'Tin'Ut was an unlovely but once useful storage place that predates the coal truck and the garage loft.  It advertised it as a give-away on Settle Sell-and-Seek and in a flash, Lisa Smith at Settle station asked if they could have it as it would be ideal for storage of winter fuel pellets.  Officialdom at Northern agreed and today, with help from the Last of the Summer Wine Gang at the signal box we lifted it bodily into position.  Our combined ages were in the region of 400. 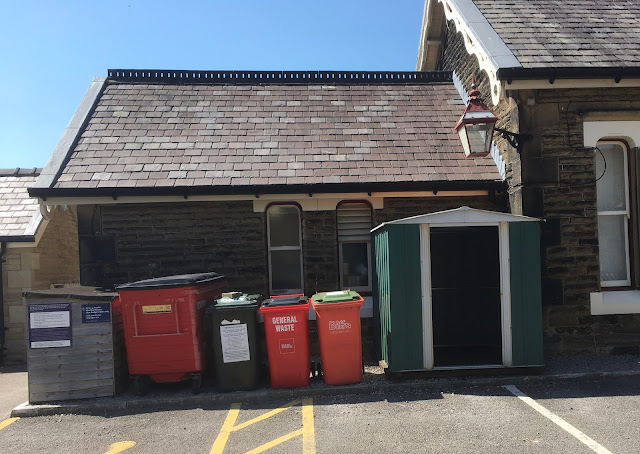 And one for the pot: 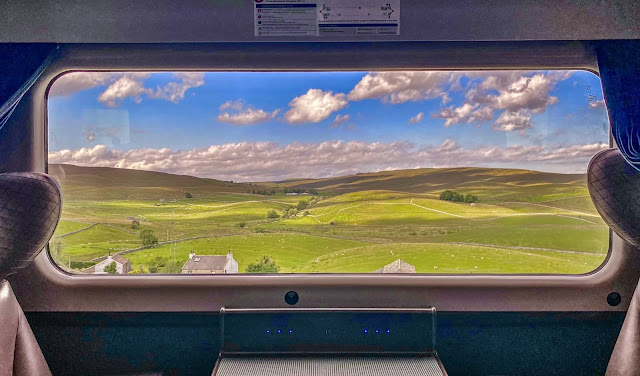 S&C-nery from the all-first-class Staycation Express which had an S&C test run during the week.

Posted by Settle Station Water Tower at 15:51 No comments: