A Trip to Carlisle

Did my weekly On Train Guide stint today on the 0950 from Settle, bouncing off the buffers as the 1155 from Carlisle.   Val was on the trolley and Mr Singh was the conductor.   A perfect combination,   Two people, perfectly  cast in their roles - plus me.   Relatively few passengers; winter after all.   Between us we served them to the utmost.   Their trip on the Worlds Greatest Railway Journey passed some of them by but was relished by others.   For some it was just A to B, earphones and i-pads, sleep or Sudoko.   For those who were with it there was the experience of a lifetime.

There was snow on the tops of the Pennines and the Lake District hills.   A pheasant raced us at one stage.

An American lady who had travelled the World was enthralled and appreciative.

I do hope that Britain, which so nearly lost this gem, never - ever - puts it at risk again.


Posted by Settle Station Water Tower at 19:04 No comments:

Our car is a fairly old (03)Honda Jazz which I took to Clitheroe today for a manufacturers recall to be done.   It has only done 28,000 miles so is in its prime.   The recall was for replacement of the electric windows switch as it is a fire risk.   It took an hour and I had a very pleasant stroll round this very pleasant town, and a most excellent full English breakfast for £3.   That's value.

When I collected the car I was told it needed further attention but it would take more time than I could spare today.   As part of the Honda service they had made a short video of what needed doing.   I was able to see it there and then and they have e-mailed it to me.   You can see it too:
http://video.citnow.com/vvVwBJ9Yy2z

I am a capable sort of chap and shall fix both the identified problems myself - and save myself £95 in the process.   Even so, I think this is a jolly good initiative on Honda's part.   It is still being evaluated.
Posted by Settle Station Water Tower at 10:55 No comments:

Sunday mornings are special for Pat.   She loves to soak in the bath and listen to The Archers on Radio 4.   Or she did until we moved into this future proof house with no radio signal in the bathroom.

But now we have by-passed the future and installed the dogs danglies of a Wi-Fi router, thanks to Father Christmas and son-in-law Alan: 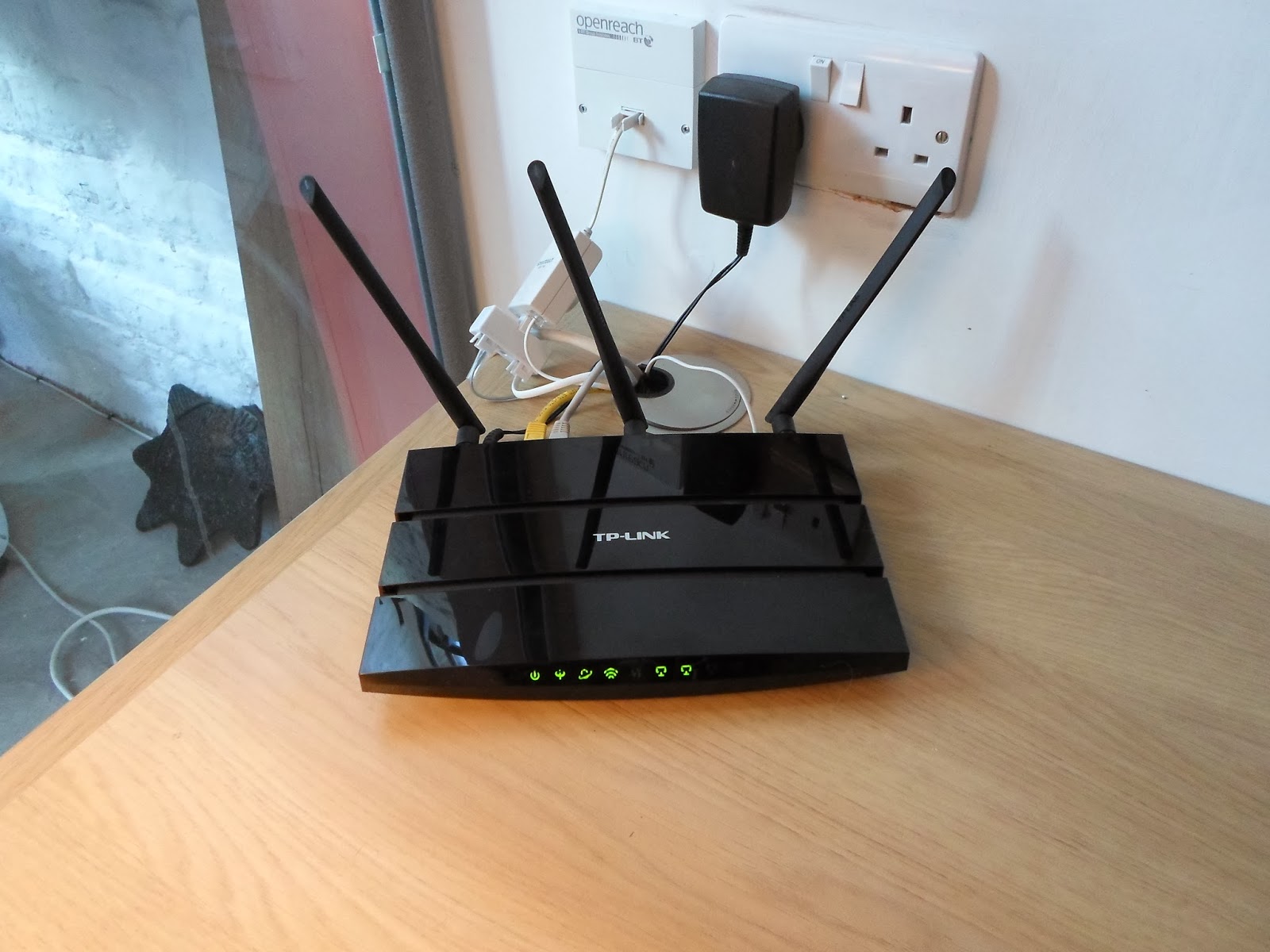 Gadgets now work all over the place - the Wi-Fi signal even reaches into the water tank - and into the bathroom.   Pat and the omnibus edition of The Archers are re-united on Sunday mornings.   Mother-in-law is happy once more.

Now, this is not another rant about wires.   Recent posts prompted a Friday evening visit from electrician Jonathan Mounsey - very concerned about wires and LEDs.   Our wires are to be demystified, labeled and connected to Freesat tomorrow.   That's service.   Watch this space.

Posted by Settle Station Water Tower at 11:16 No comments:

A Visit by Architect Stuart Green

Water Tower architect Stuart Green popped by yesterday, drank port and was pleased.    He liked the atrium especially.   This is always a relief as Stuart is not one to mince words.   He even walked down the George Stairs without comment.   He is keeping busy with projects at Heathrow airport and at The Regents Canal Visitor Centre by Kings Cross.   Weren't we lucky that Stuart was so enthused with our little water tower that he pleaded to design the new bits?   It's the only water tower in the World with a mini airport terminal stuck on the side!
Posted by Settle Station Water Tower at 10:21 No comments:

Settle Coal have been in action again today shifting and lifting two heavy items for the garden embankment area.   Sorry about the orientation of the pictures.   The first one shows a cast iron water valve that once served the water crane being lowered into the rockery - where it may become Britain's first cast iron rockery rock.   It is not actually as daft an idea as it sounds.   It preserves the valve and when it is embedded among the rockery plants it will be fine.   Trust me. 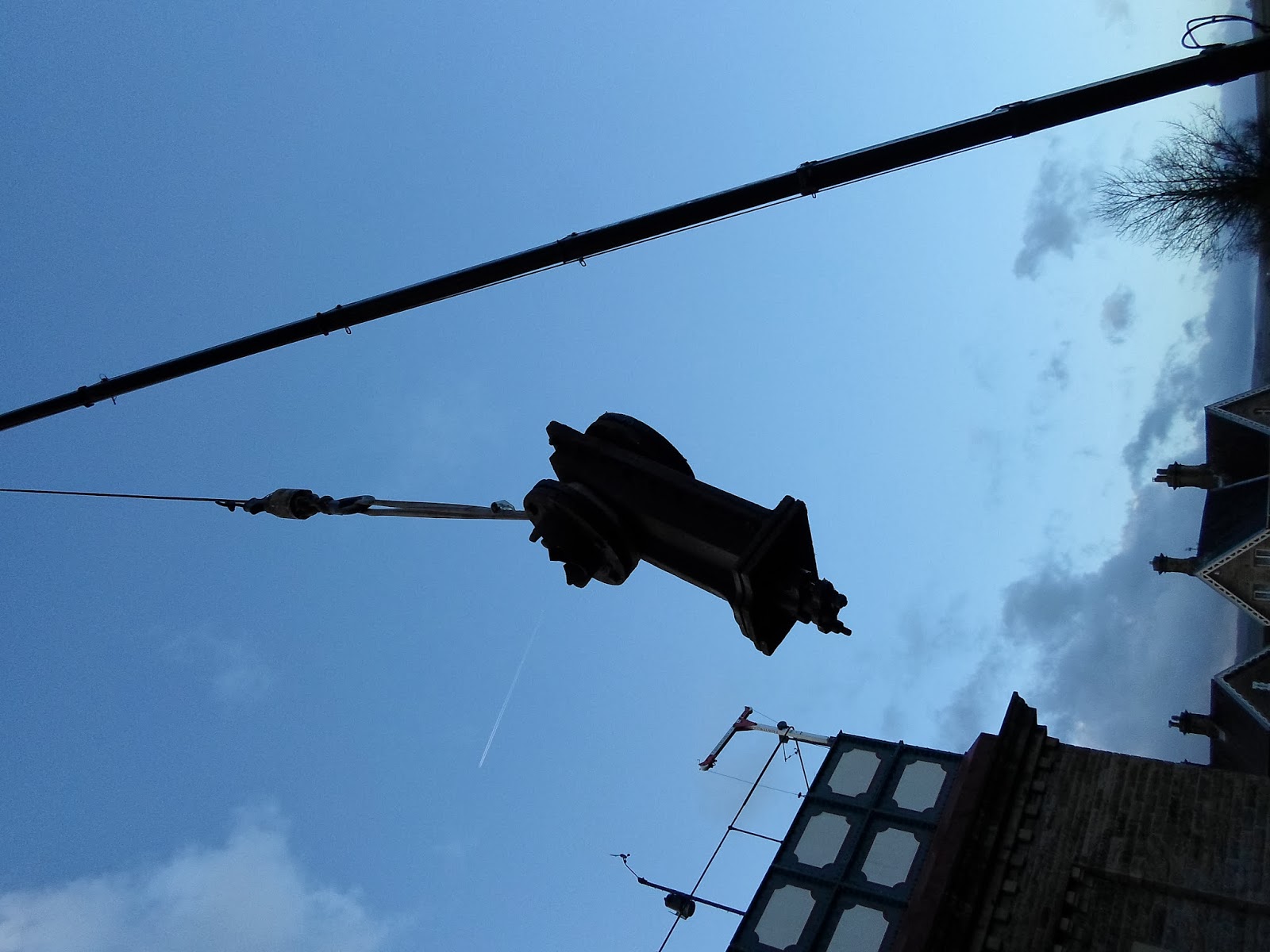 Below, also with an orientation problem is an ex Huddersfield Corporation cast iron gas lamp-post.   This has followed us during three house moves. 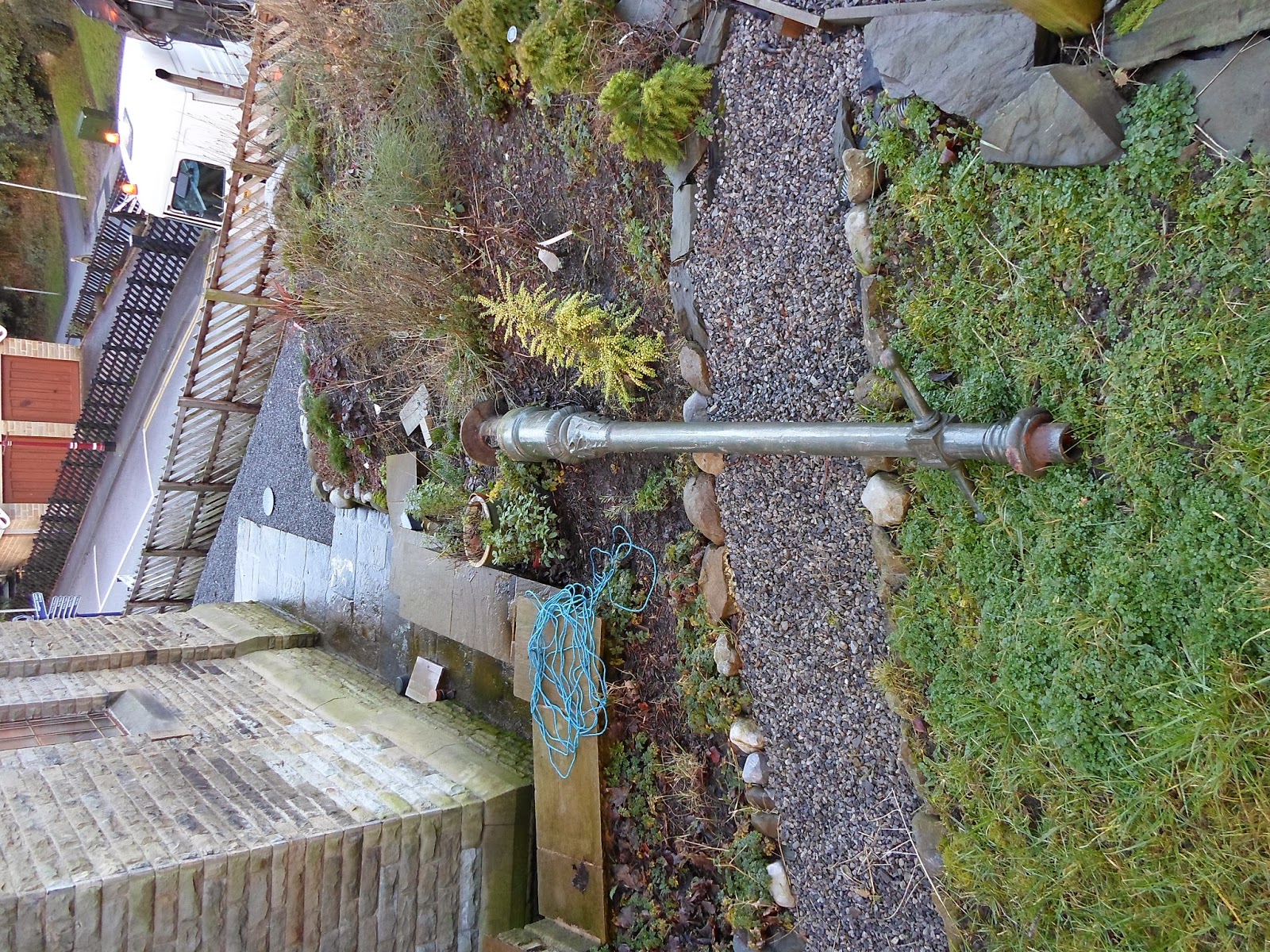 Posted by Settle Station Water Tower at 11:07 No comments:

This must be just about the most boring picture of all time but let me explain. 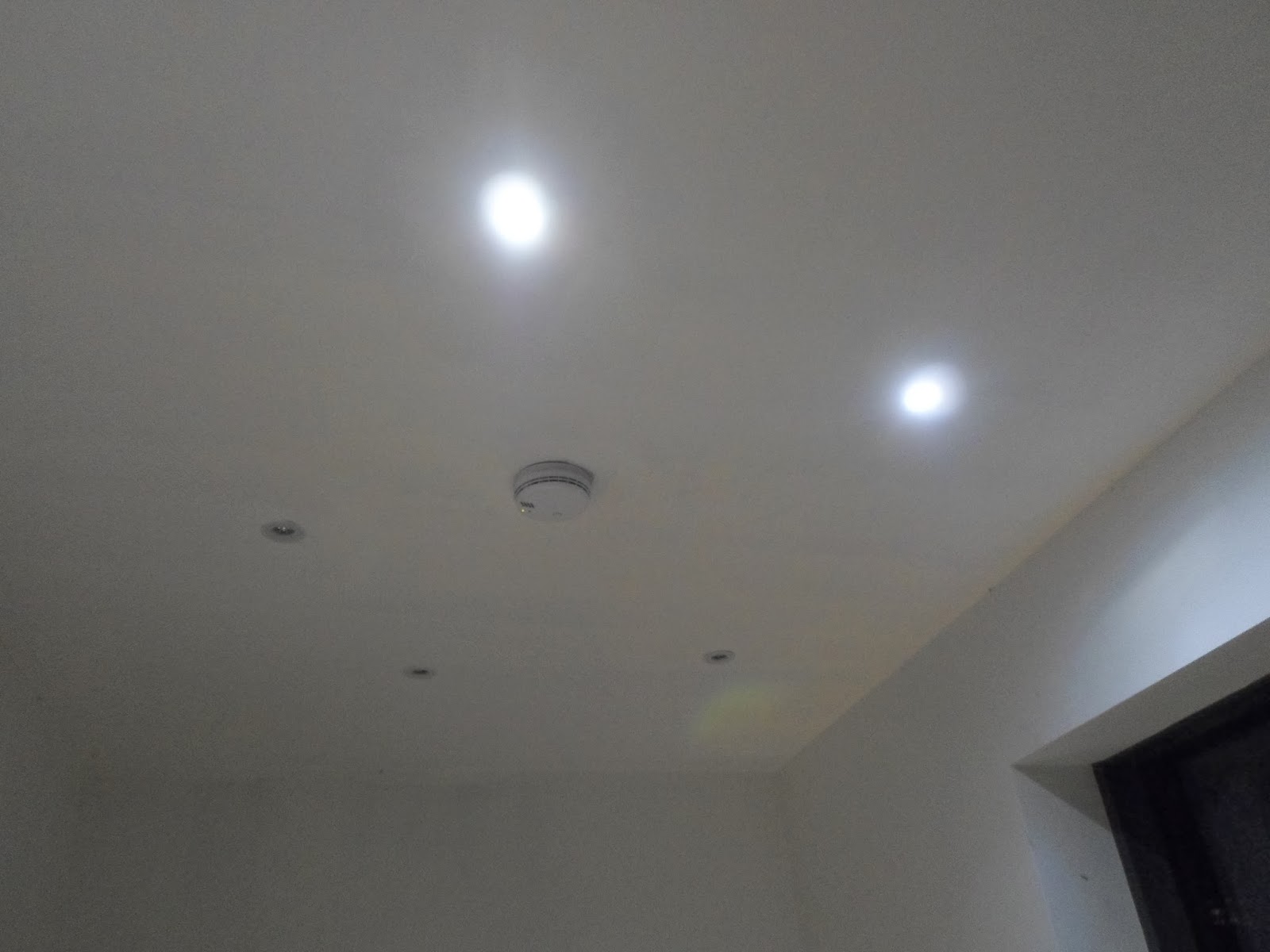 It shows the ceiling above our annex stairway.   Almost every light in the water tower is a light emitting diode or LED, fitted on the understanding that their long life pays for their high initial cost because of their minimal power consumption compared with traditional incandescent and the later halogen bulbs.

The blob in the middle is a fire alarm.   The three smaller blobs behind it are failed LED lights.   The two white blobs are the sole survivors of five flipping expensive LED bulbs.   These things are supposed to last for thousands of hours but I'm here to tell you they don't.    We have only lived here for 18 months and these particular lights are in occasional use only.

LEDs have died in most of the rooms here.   I find I need as large a stock of LED replacement bulbs as my former stocks of conventional bulbs.

Do not be LED up the garden path with promises of long life from LEDs.

Still with electrics another pitfall for a new-build (or a de-facto new build of a restoration) is the question of 'future proofing' your home by the provision of extravagant mileages of  redundant wiring, overtaken by Wi-Fi and other wireless technologies.   It applies to data and telephone cables, speaker cables and TV / radio cables and aerials.   We have a veritable Christmas tree of aerials, all but one of which (a single satellite dish) are unnecessary.