I took grandson Ben (5) on the 1146 today.   He told me afterwards that going on trains with his grandpa was his favourite thing.   Isn't that nice? 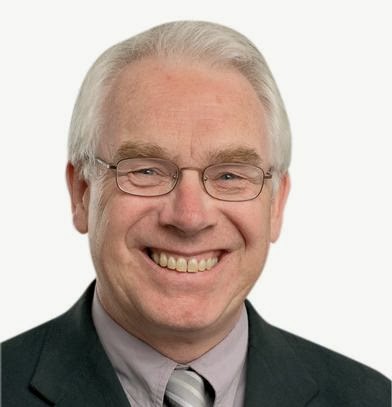 One of the joys of being a volunteer On-Train Guide is the opportunity to meet interesting people.   Today was no exception.

On the northbound train was Prof Paul Salveson.
Besides being a very bright guy, Paul is a thoroughly good chap, as this picture testifies.   He is a walking encyclopaedia on railways.

Then, on the return train was Dr Ian Dewhirst.

Ian is one of the most modest and unassuming of people yet stick him behind a lectern or behind a microphone and he undergoes a metamorphosis.   A historian, he has the ability to make the past come alive. 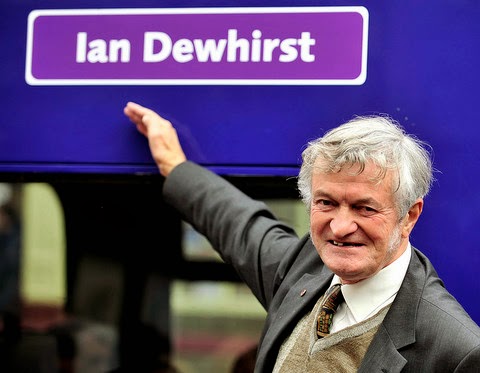 Not just that he is a Yorkshire icon - to the extent that he has a Northern train named after him!

Here is Ian at the naming of 'his' train.   This honour is not  easily won, especially if you are still alive!   Among other names we regularly see on trains passing through Settle are Barbara Castle and Freddie Truman.

He was returning home from lecturing in Scotland.  I asked Ian if he had checked out the train at Carlisle to see if his name was on the side of it.   He hadn't, which did not surprise me.


Posted by Settle Station Water Tower at 14:50 No comments:

In passing, during the horrendous flooding, storms and hurricane force winds the S&C has run almost like clockwork.   At times it has been the only available rail route between England and Scotland.   WHAT a good job it wasn't closed.

If you are going from Leeds to Glasgow the S&C:
- is as quick as the East or West Coast routes, sometimes quicker
- is 60 % cheaper (Which? magazine, January 2014)
- is spectacular
- is not prone to overhead wires getting tied up in knots
- and doesn't flood

What more could anybody want?

How odd then that the National Rail Enquiry website does not offer it as an option - until you dig deeper and ask it to show 'slower trains and alternative routes'.

Spread the word they still don't want you to hear.
Posted by Settle Station Water Tower at 08:17 No comments:

We've done it.   Fitted a surround sound system in our main room - with some difficulty!

We had been wired for speakers but the wires led to a cupboard downstairs.   Yet the box of tricks, a Yamaha 3066 if you revel in such detail, has a display on the front which gives important information so you need to be able to see it.

Also the Infra Red remote technology would not work for us.

The same cupboard was where our satellite aerial leads ended so we were satellite-less where we needed it.

I reverted to low technology and have run wires from the cupboard downstairs to the TV etc upstairs.   You live and learn.

That cannot be said for the LED light bulbs, which continue to fail (two in the past week).   Like many people who have fallen for the LED sales pitch I have a box full of halogen bulbs and propose to fit them as the LEDs fail.   It will be cheaper by far.    The LEDs that keep failing are Kosnic 5W GU10s.   They cost £9.60 each and have a claimed life of 30,000 hours.   Mmmmmm.

People are often surprised to hear that steam trains run over the Settle-Carlisle route in winter too:

The winter Cumbrian Mountain Express goes from London Euston to Carlisle and back.   Details at
http://www.railwaytouring.net/uk-day-trips/winter-cumbrian-mountain-express-2
The S&C can be fickle in winter.   Some days you cannot see a thing but more often than not, it is glorious.
Posted by Settle Station Water Tower at 08:45 No comments:

The Settle-Carlisle's trolley service is first class - but they cannot cover every single train.   It is especially appreciated by train crews so it is really missed when it is not there.   It is a long way from Leeds to Carlisle and back.

Yesterday, an enterprising train conductor used Facebook to contact Paul Brown at Settle Station explaining that there was no trolley on his train and he and the driver were both gasping.   More in hope than expectation he even specified how they liked their coffees.   Cheek and enterprise were rewarded when the train got to Settle thanks to Paul the station supremo and Stephen the trolley supervisor.
Posted by Settle Station Water Tower at 17:25 No comments:

It's Tuesday Again, so it Must be Carlisle

On the 0950 from Settle today it was John Chadwick on the trolley and the train was pretty full with people taking advantage of the amazingly good value West Yorkshire fare offer.   Trouble is, many of these people do the winter journey year after year so they have already invested in a £3 line guide - or have taken a lifetime decision not to buy one before hell freezes over.   Northbound I sold just six guides.

When handing over the money to John Chadwick I apologised for the modest sales and opined that my customers had probably bought them out of sympathy.