Fairport Convention are an evergreen and world famous folk rock group.  They were playing to a sell-out Victoria Hall in Settle last week.  Longtime friends Chris and Nigel Schofield travelled from Bradford to see and hear them and they tipped us off that they would like to see the water tower.  Nigel had written a book about Fairport Convention back in the day when he was a radio broadcaster specialising in their sort of music.  Sure enough they just turned up at The Sidings gate next morning. 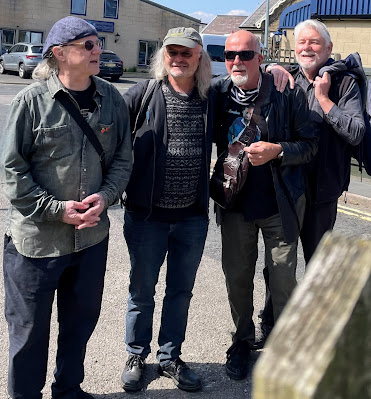 That evening their next performance was in Carlisle so they had planned to take the train there, naturally.  Their equipment went up by road and they were in luck on the train on three counts.

1. their train was delayed so they were able to wait in the sunshine at Settle station, and to admire it

2. they savoured S&C coffee from the trolley which was being manned (personed?) by fan Andrea.

3. On-Train-Guide Mike Coates was returning on their train to his home in Carlisle so he was able to give them his undivided attention and commentary on the journey

We do get to meet some fascinating people living where we do.

Do please leave comments. If nothing else it shows that there is somebody out there.